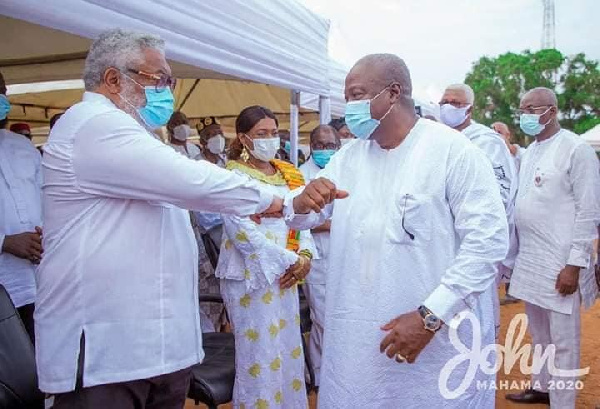 According to the NDP, Mr. Mahama stands no chance to benefit from the death of Mr. Rawlings unlike that of the late President of the Republic, John Evans Atta-Mills.

Addressing a press conference in Accra on Monday, November 23, 2020, the General Secretary of NDP, Alhaji Mohammed Frimpong, said the NDP is finding it so difficult to comprehend with why the NDC and Mr. Mahama want to benefit from the death of Mr. Rawlings when same vilified the persona of the former President when he was alive.

“When Jerry Rawlings was alive, John Mahama so desperately wanted to silence him. And now that J. J. is no more, John Mahama finds it expedient to utilize his death to galvanize support for his weakening base within the NDC rank and the country at large to salvage his 2020 campaign which is going nowhere. Suddenly, these individuals in the NDC under the current leadership of John Mahama who publicly vilified Jerry John Rawlings have rediscovered a new voice proclaiming themselves to be the true adherents of his ideals. Those who publicly described JJ using unpleasant words such as calling him “a barking dog’ are now hailing him. Why?

“In what was widely reported by media outlets in Ghana, John Mahama, during the NDC’s unity walk in Ho in 2018, was on record to have labelled JJ Rawlings as a ‘Volta god’ who did not deserve to be worshipped by Voltarians. In fact, he is quoted as saying, “We have worshipped the Volta god for so long. It is time to build the party beyond individuals. No sacrifice would please him.” This was a classic situation where John Mahama made a futile attempt to turn Voltarians against their hero.

“It did not end there. Voltarians who felt they were going to be safe under the leadership of John Mahama were given the shock of their lives when Mahama deliberately sponsored candidates to remove all Voltarians from the leadership of the NDC during the national executives’ elections. Today, there is not a single Voltarian elected to a substantive position, not as a deputy but as a national executive in Mahama’s NDC.

Today, the same Mahama who admonished Voltarians against what he claimed as “worshipping of the ‘Volta god’ is frantically exploiting the death of the same ‘Volta god’ to salvage his failing political ambitions. It is too late!” the NDP noted.

Below is the full statement read by the NDP as the press conference:

Support for Mrs. Nana Konadu Agyeman Rawlings and the family

his wife and our leader, Nana Konadu Agyeman Rawlings.  She is the mother of his children. She is his love, his friend, his soulmate, his partner, his pillar, his counsellor, his defender. And he too was all these and more to her.  Their hopes and their fears were shared, and together they shaped his political life and his impact on our dear country. She believed in him and he believed in her. They believed in and held on to each other without reservation. Their loyalty to each other was there for all to see.

Attempts to desecrate Rawlings’s Legacy before his death

The hypocrisy of the NDC

The wishes of President Rawlings