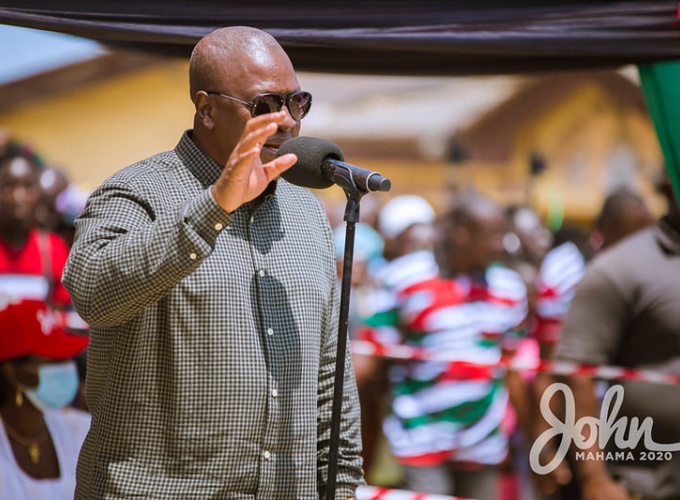 National Democratic Congress(NDC) Flagbearer John Mahama has served notice he’ll pursue all GPRTU buses procured by his government but have been appropriated by chairmen of the ruling New Patriotic Party when he comes back to power in 2021.

He has accused the Akufo Addo government of diverting 33-seater buses he procured for the Ghana Private Road Transport Union(GPRTU) before exiting power to its party chairmen.

Commenting on the matter in an interview on Woezor TV monitored by Kasapafmonline.com in Cape Cape Saturday, the former President who condemned the action by the NPP stated that he’ll ensure that the rightful owners receive the buses when he’s voted back to power if the NPP bigwigs are not paying for the buses.

“Before we left office we managed to procure a lot of mid-size Benz buses and a lot of small vehicles for taxi service under the MASLOC programme. We left those vehicles there, we registered them and we were in the process of handing them over to the GPRTU and the new government came in. When the new government came for some strange reason they wanted to create an impression that the vehicles were ordered in their time. So even though the vehicles were registered with 2016 number plates, they took off all the number plates and re-registered the vehicles with another year’s date within their era.”

He added: “Instead of handing over the vehicles to the GPRTU, they’ve shared them to their party chairmen. I know several of their party chairmen and other executives who have these buses and vehicles. This is not right,…I hope that they are paying for the vehicles because if they are not paying for them and they think they are gifts when we come we are going to go after them and take those vehicles back and we can re-auction them to the GPRTU and other commercial drivers for whom we bought those vehicles.”

The Microfinance and Small Loans Centre (MASLOC) in 2019 presented 83 buses to the Ghana Private Road Transport Union (GPRTU) under a hire purchase agreement.

The government explained that the high price of the buses made it impossible for the GPRTU to acquire the vehicles for commercial operations, hence the intervention by the government.