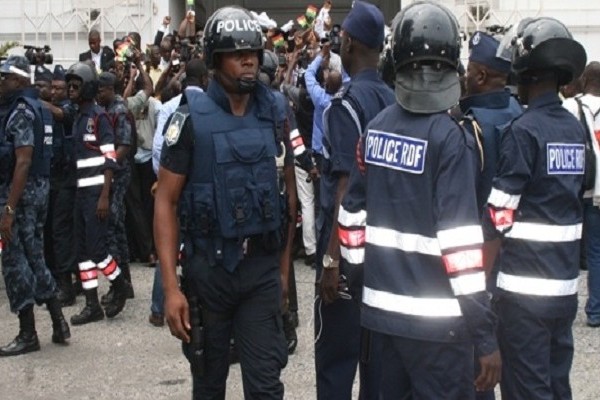 Two Police Commanders have been hauled before the Privileges Committee of Parliament for their fate to be determined as to whether their alleged manhandling of the NDC MP for Madina, Francis-Xavier Kojo Sosu on Monday, October 25, 2021, constitute contempt of Parliament.

The Privileges Committee is to investigate the complaint and submit its report to the House for consideration following which a determination would be made as to whether the evidence gathered constitute contempt of Parliament.

Sosu, making his case requested the House to cite the two Police Commanders for contempt of Parliament under Order 73 and 31 of the Standing Orders of Parliament.

He told the House that he led his constituents to protest against bad roads in his constituency on October 25, 2021, after getting the green light from the Police, admitting though that the occasion witnessed some horrid scenes but were brought under control by himself and the police officers who were dispatched to maintain peace and order during the protest march which ended at Ayimensah.

Mr. Speaker, they [Police] insisted that they were not going to allow me to go so, I enquired are you putting me under arrest? If you are putting me under arrest, then you need to tell me the reasons to my arrest and read out my rights to me and knowing that I am a sitting Member of Parliament on parliamentary duties, you will have to write to the Rt. Hon. Speaker before I can respond to any criminal complaint that you want to give. After this conversation, I went on to speak to the media and made it very clear that the invitation that I have been given, I have declined and that they [Police] know what they should do appropriately by writing to the Speaker”.

He added “Mr. Speaker, right after this, the Police officers under the command of the said ACP Isaac Kojo Asante, the regional operations commander and ACP Eric Winful, the divisional Commander of Adentan/Abokobi, led their boys to manhandle me, and virtually, held me and humiliated me right in the presence of my constituents”.

According to him, the youth witnessing the ordeal that he was going through ganged up to rescue him from the hands of the Police, stressing that had it not been their intervention, the Police would have bundled him just like a common criminal into their waiting vehicle.

“Mr. Speaker, when the youth eventually supported me and got me into my vehicle, the said Police officers stood in front of my vehicle and continued to bang my vehicle and refused to allow me to leave the venue of the demonstration until I mustered courage and sped off. I believe that the conduct of the two police officers are clearly in contempt of the work that I do as the Member of Parliament and in contempt of this Parliament. I don’t see the why as a sitting Member of Parliament, the Police will manhandle me in that manner to the extent that when I left there, there was information all over that the Police had sent people to my house, to my area, and I could not even stay in my house for the last 48 hours. Based on this, I wish that Mr. Speaker, you will exercise your powers under Order 31 of the Standing Orders of Parliament to refer this matter to the Privileges Committee for further investigations”, he submitted.

Rt. Hon. Bagbin after hearing the submission of Sosu, spoke extensively on why privileges and immunities granted Members of Parliament or staff of Parliament as well as security personnel under the constitution should safeguarded since they constitute the building blocks of democracy.

“If we allow that to be eroded, we have no legs to stand on. As we sit here, we are not individuals. You are a corporate body of your constituents and you are also representative of your political parties and you represent Ghana. So, you are not individuals. The Police and the security agencies represent the state, That is why when one is beating you and you are stronger that the person, you can’t touch the person. If you touch that person, you touch the state and the state will deal with you. As a result of that those special rights that they’ve given to the Police, the security services and the rest, some special rights are also given to Members of Parliament and some staff that work in Parliament. We don’t joke with that. You are not just Members of Parliament; you are leaders and if leaders cannot even take care of their constituents, what is your value? They have given … to lead them to have better lives; protect us, defend us; care for us; and make sure we enjoy the fundamental human rights and freedoms that are guaranteed in the constitution so that we can exercise our potentials to the fullest”, he noted.

He added “In the circumstances, I can only rule under Order 31 and direct that the matter be referred to the Committee of Privileges. The Committee will investigate the complaint and will submit a report to the House for consideration on the matter. At the end of the day, it is the House that will determine whether the complaint or whatever evidence gathered will really constitute contempt of Parliament. We have to go through the process”, he noted.