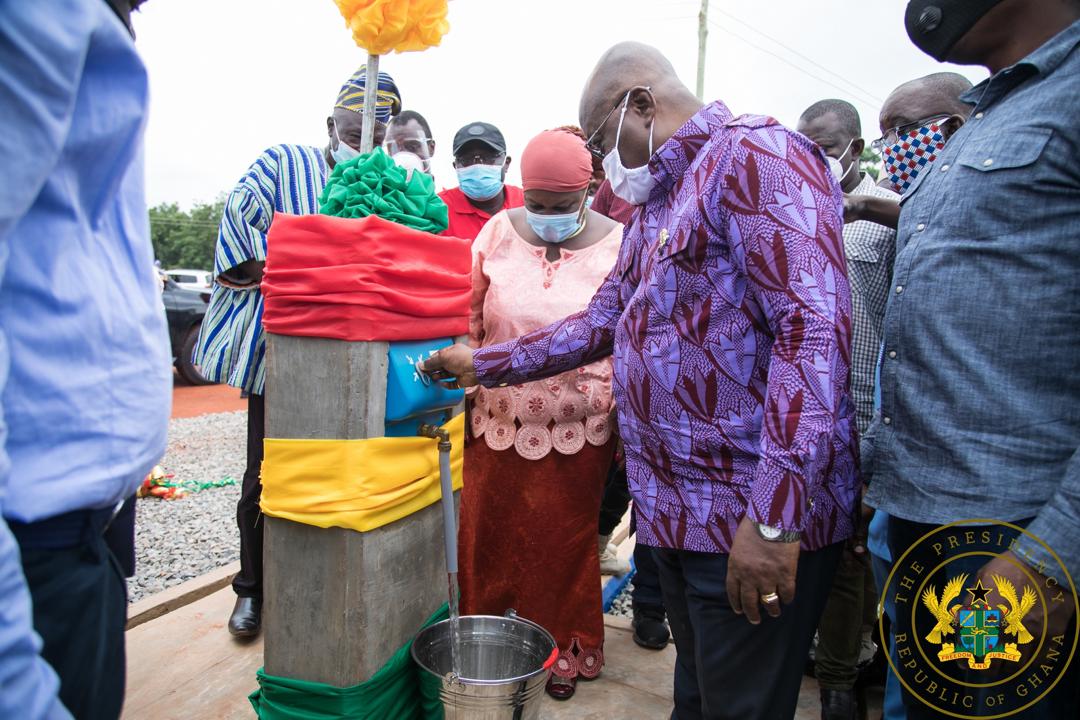 The President of the Republic, Nana Addo Dankwa Akufo-Addo, has commissioned the Nalerigu Water Supply Project, constructed under the Sustainable Rural Water and Sanitation Project.

Speaking at the commissioning ceremony on Tuesday, 28th July 2020, President Akufo-Addo noted that the Sustainable Rural Water and Sanitation Project has been implemented in eleven (11) out of the sixteen (16) regions of the country, and has been financed by a $47.5 million credit facility from the World Bank.

“The number of beneficiary communities are nine (9), and these are Nalerigu, Walewale, Wungu, Gbimsi, Gambaga, Naanori, Chereponi and Saboba. It is instructive to note that, out of the total amount of twenty-six million, eight hundred and fourty-eight thousand and seventy-five cedis (GH¢26,848,075) spent on the water project in the North East Region, the cost of the Nalerigu Water System was four million, nine hundred and thirty-two thousand and eighty-five cedis (GH¢4,932,085),” he said.

The President continued, “As co-Chair of the Group of Eminent Advocates for the 2030 Sustainable Development Goals, I am glad that the completion of this project will go towards the realisation of SDG No.6, which demands that we “ensure availability and sustainable management of water and sanitation for all”.

To residents of Nalerigu and beneficiary communities of the water project, he admonished them to help ensure the longevity of the treatment plant by protecting the water bodies “by stopping activities such as galamsey, sand winning and farming along river banks, all of which lead to their pollution”.

This, the President explained, would help guarantee improved water supply, in terms of quality, quantity and reliability, to the people of Nalerigu and surrounding communities, as water-borne diseases, such as guinea worm, cholera and dysentery, would also be eliminated.

President Akufo-Addo was expectant that “the availability of potable water in this area, investors will take advantage of Government’s Flagship Programmes such as “One- District, One-Factory” to establish small and medium scale factories to create employment opportunities for the youth of this community, and stimulate the growth and development of the local economy.”

With the Community Water and Sanitation Agency, since 2017, engaging one thousand, one hundred and fifty-two (1,152) professionals, made up of engineers, hydrogeologists, water quality specialists, accountants, community relations officers and revenue staff, to ensure that the water systems are properly managed and maintained, the President encouraged inhabitants in the beneficiary communities, with requisite skills in water systems management, to take advantage of the employment opportunities created by the provision of the water systems.

“I will continue to urge inhabitants of the beneficiary communities to help maintain this water infrastructure, so they can continue to have access to potable water and, through that, ensure the general well-being and health of all the respective communities,” he added.