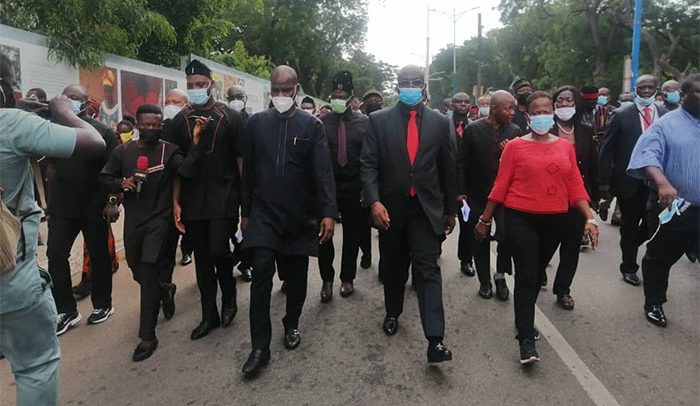 The State has sued some Members of Parliament (MPs) who are members of the National Democratic Congress (NDC) over their march to the Electoral Commission’s head office in Accra on Tuesday, December 22, 2020.

The legislators numbering eleven were sued for holding such an event without notifying the Police per the laws of the land.

The suit a copy of which has been sighted by Politicoghana.com said the actions of the legislators was an unlawful assembly.

The NDC MPs led by its leader Haruna Iddrisu, on Tuesday, December 22, 2020, walked from Parliament to the premises of the Commission to present a petition over the results of the 2020 presidential and parliamentary polls.

However, the legislators were met with resistance from the police officers who applied some force to stop them from going to the premises of the EC.

They are challenging the results of the Techiman South Parliamentary polls.

In a six-pager petition, the NDC MPs are asking the EC to collate the Techiman South Constituency Parliamentary and Presidential Elections Results from all the Two Hundred and Sixty-Six (266) Polling stations.

“We demand that you cause to be collated the Techiman South Constituency Parliamentary and Presidential Elections Results from all the Two Hundred and Sixty-Six (266) Polling stations in accordance with the law, with immediate effect”, the petition in part read.

The NDC MPs are also demanding that “that pursuant to regulation 43 (2) of C.I. 127, the endorsed writ, gazette notification and notice to the Clerk of Parliament be amended accordingly to reflect the true state of affairs”.