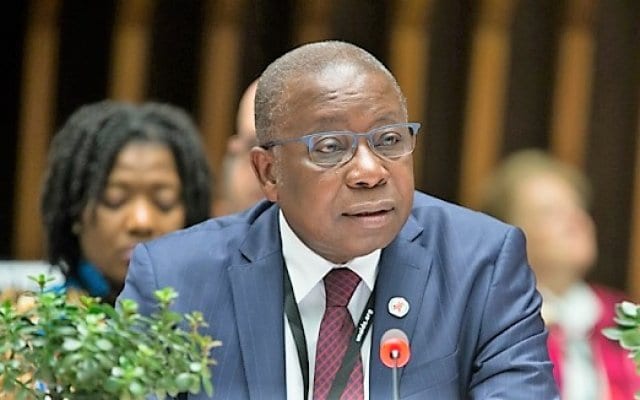 The middle-man, Sheikh Ahmed Bin Dalmook Al Maktoum that was contracted by Ghana through the Ministry of Health, to procure Sputnik-V vaccines for the country to help it fight the ravaging COVID-19 pandemic, has paid an amount of GH₵2,470,000.00 into the state treasury.

The money is a refund for 280,000 non-supplied doses of the Sputnik-V vaccines.

Ghana, had through the Ministry of Health, contracted the Emerati to supply her 300,000 doses of the Russian Sputnik-V vaccine at a contract sum of US$5,700,000. A dose of the Sputnik-V vaccine was cost the West African nation US$19.00.

The move was spurred by the difficulties in obtaining more COVID-19 vaccines having taking delivery of its first consignment of 600,000 doses of AstraZeneca COVID-19 vaccines developed by the Serum Institute of India through the COVIX Facility Initiative with logistical support from UNICEF.

However, the UAE businessman and his SL Global company, wrote a letter dated March 9, 2021, to Ministry of Health to terminate the contract with the excuse that they are unable to supply the quantities of doses as agreed in the deal.

The attention of some Members of Parliament, especially, those on the Minority side, was drawn to the fact that the Ministry of Health had entered into a procurement contract for COVID-19 vaccines with the belief that some breaches were made.

Accordingly, the Minority Leader, Hon. Haruna Iddrisu, moved a Private Members Motion for the House to set up a Committee to probe the matter and same was seconded by the Ranking Member of the Health Committee and MP for Juaboaso, Kwabena Mintah Akandoh, on Thursday, July 8, 2021.

The motion was adopted by the House leading to the establishment of an Ad Hoc Committee to investigate the Procurement contract between the Government of the Republic of Ghana and Sheikh Dalmook Al Maktoum and S. L. Global, for the supply of Sputnik-V COVID-19 Vaccines.

The Committee which was chaired by the Deputy Majority Leader, Hon. Alexander Afenyo-Markin, had held the view in its report that although the Minister of Health, Hon. Kwaku Agyeman-Manu, breached the procurement processes and Article 181(5) of the constitution, he acted in good fate with clear intentions of saving lives in an emergency situation.

The Committee therefore recommended that Ministry of Finance to contact Sheikh Al Maktoum for a refund of US$2,470,000.00 being cost of the non-supplied Sputnik-V vaccines.

Hon. Agyeman-Manu, appearing before the Committee admitted that even though he did not seek Parliamentary approval as well as that of the Public Procurement Authority (PPA) for the said deal, he was in the process of going to Parliament to ratify the Agreement.

He had also written to the PPA to also regularize the deal.

The findings of the Committee report has led a cross section of the public to demand for the head of Mr. Agyeman-Manu.

But Mr. Agyeman-Manu, in a letter dated August 2, 2021, responding to the contract termination by the Emerati Shiekh, also requested for a refund of the money paid for the purchase of the Sputnik-V vaccines, excluding the already supplied 20,000 doses.
Ghana had made an advance payment of 50% (US$2,850,000.00) of the total contract sum of US$5,700,000.00 for the purchase of the COVID-19 vaccines.

The Emerati in a letter dated August 5, 2021, acknowledged receipt of the Ministry of Health’s letter and requested that the Ghanaian officials share with them bank details where the refund needs to be processed.

The request was duly complied with by the Ministry of Health.

On August 11, 2021, the Sheikh Ahmed Dalmook Al Maktoum and his SL Global company again wrote to the Ministry of Health, announcing a refund into Ghana’s treasury, an amount of US$2,470,000.00, representing 280,000 non-supplied doses of the Sputnik-V vaccines.

“The requested amount of Two Million, Four Hundred and Seventy Thousand United States Dollars (US$2,470,000) has already been refunded to the designated bank account, as communicated by you”, the letter from the Emerati in part read.

Deputy Majority Leader of the Parliament of Ghana, Hon. Alexander Afenyo-Markin, commenting on the development on Accra-based Oman FM, confirmed receipt of the refund payment of the non-supplied doses of the Sputnik-V vaccines.

He said Mr. Agyeman-Manu, all along, was candid in his responses, when he appeared before Committee, having entered into an agreement with a genuine businessman.

According to Hon. Afenyo-Markin, who is also the New Patriotic Party (NPP) MP for Effutu, the refund of US$2,470,000 brings closure to the matter since there was no financial loss, believing that those calling for the head of the Minister of Health will now have a change of mind.

“As we speak today, H. H. Sheikh Al Maktoum has refunded the money in full. So, no financial loss was incurred”, he noted.