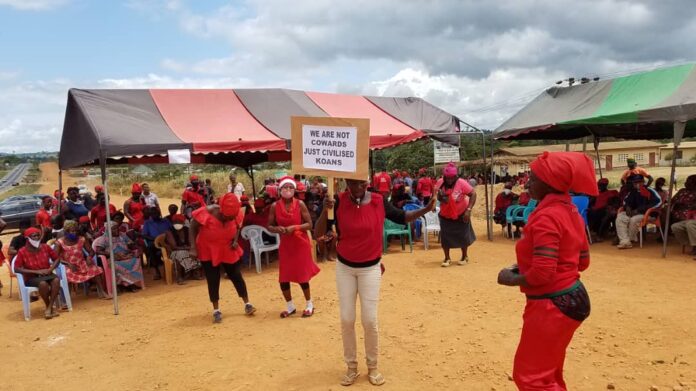 Residents in about fourteen farming communities in the Akyem Abuakwa area are up in arms with some of their Chiefs for deliberately taking over their lands and selling them out to real estate developers and sand winning companies.

They do not understand why their pieces of lands acquired from their ancestors over 200 years ago will be taken away from them by some Chiefs in the area.

They claim they have been dispossessed of their lands with the Chiefs engaging landguards and forestry guards to ensure none comes closer to the said pieces of lands.

The aggrieved residents who hits the streets to demand for justice therefore, want the government to intervene to enable the reclaim their pieces of lands which have been their source of livelihoods for ages.

Failure to act, they noted, will see them “match the invaders boot for boot”.

“Vulnerable peasant farmers are being harassed and chased away by landguards. They have destroyed their farmlands. We acquired the lands from our great grandfathers who had legal titles to it. We have all the documents sufficient to claim ownership. However, one Mankatta who allegedly bought 27,000 acres from Teacher Mante through to Asuboi and Abodiemu, as well as KOANS Estate who claimed he bought some 2800 acres lying at the other side of the road, are ejecting us from the land and disturbing our peace,” one of the protestors, Vincent Abedi fumed.