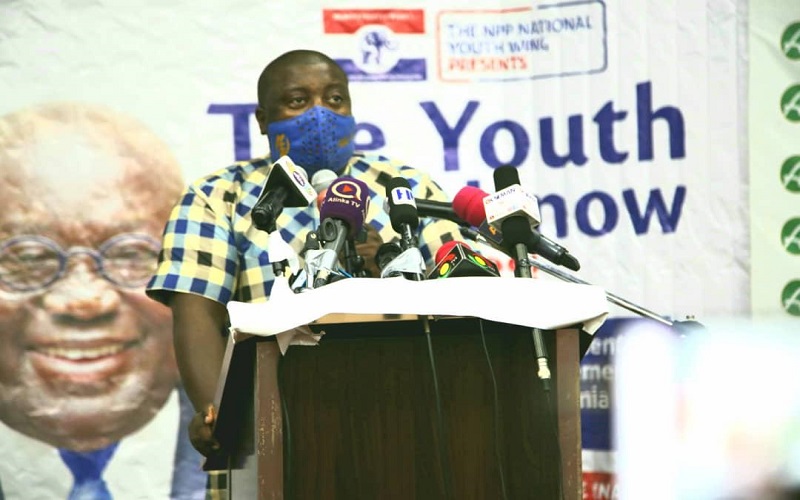 The national Youth Organiser of the New Patriotic Party (NPP), Henry Nana Boakye, has said over two million jobs have been created over the past three years under the Akufo-Addo-led administration.

Giving the youth reasons why they need to retain the ruling NPP in power as the December poll approaches, Nana B, as he is affectionately called, noted the Akufo-Addo and Bawumia ticket is the safest pair of hands to keep the country’s economy on a smooth track.

On education, the national youth organiser stressed that Akufo-Addo’s record is unmatched, especially with the coming into being of the Free SHS programme, which saved over 1.2 million students from staying at home.

“The universally-acclaimed Free SHS and TVET Education have seen 1.2 million beneficiaries. The government has absorbed registration fees for children sitting the Basic Education Certificate Examination (BECE) from both public (391,318) and private (397,500) Junior High Schools in 2020. The difference this makes to both parents and their wards cannot be overemphasized! In addition, the government has also paid Ghc75 million as examination fees for 313,838 students sitting the West African Senior School Certificate Examination (WASSCE),” Nana B remarked.

He added: “Unrivalled infrastructural projects in SHS and Basic Schools – 1,200 infrastructural projects in SHS and 557 at the basic school level. This development also encompasses libraries– the construction of 2 libraries and renovation of 10 existing libraries, including the Accra Central, Asokore and Hohoe libraries. The construction and establishment of ten (10) Training Centres of Excellence for the Council for Technical, Vocational Education and Training (COTVET).

“Youth scholarships for over 30,000 brilliant and needy students via the District Level Scholarship Scheme in 2019, alone, projected to be over 60,000 students in 2020.”

Comparing the manifesto of the National Democratic Congress (NDC) and that of the NPP, Nana B said that of the major opposition is full of contradictions and promising spree.

“The promising spree, contradictions and u-turns of Mr John Mahama and the NDC signal only one thing: that their singular aim is to say and do whatever it takes–including what the devil may himself frown upon– to capture political power,” Nana B stressed.

“Still holding onto the idea that Ghanaians have short memories, Mr Mahama is now promising to maintain the Nursing and Teacher Trainee allowances. S3 kwaterekwa s3 ob3 ma wo ntama a, tie ne din. Was he not the same person who claimed they were not tenable and therefore cancelled them? Does he think he can lie his way to victory in the upcoming elections?

“Mahama and the NDC have promised to absorb 50% of fees of tertiary students for the 2020 /2021 academic year. For someone who vehemently opposed Free SHS and even claimed it was impossible to implement because he was bereft of innovative ideas, what can he do to tertiary education? We must ensure such a person does not come to power to mess up our education system!

“Must we really remind Ghanaians about the sordid reality of dumsor, the plethora of collapsed businesses and its concomitant hiked unemployment? How can such a person who could not stabilise the power supply for eight years do it in four years? Are we ready for another NDC term to turn back the hand of the clock to those dark days?”