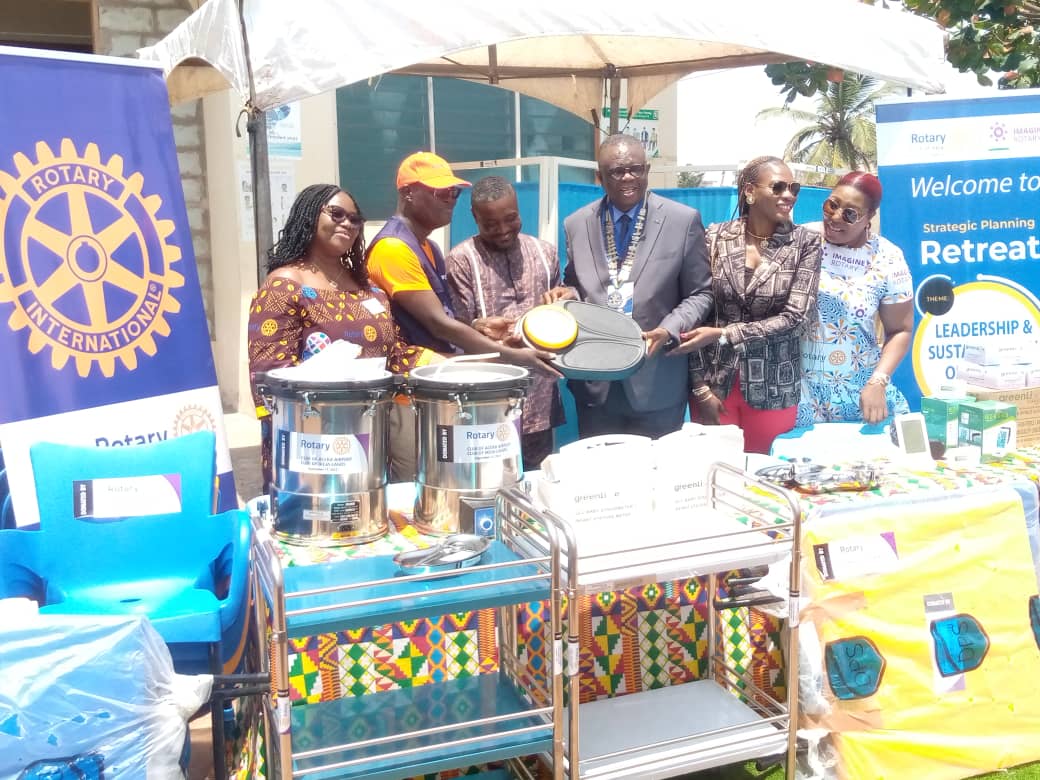 The move is to improve health delivery at the health facility in order to serve the Nungua community better.

The gesture by the two Rotary Clubs was in response to a request made by the administration of the Cleantown Heath Centre to the Rotary Club Accra-Airport when it took part in the recent national Polio immunization exercise at the health facility.

The President of Rotary Club Accra-Airport, C. C. Bruce, interacting with journalists on the sidelines of the ceremony to present the items, said the two Rotary Clubs feel fulfilled of impacting positively on the Nungua Community with the medical supplies.

He was hopeful that the partnership between the Rotary Club Accra-Airport and Rotary Club of Ikeja, Lagos, would be the start of a “Twin-Club” relationship that would be of mutual benefit to their respective societies.

Mr. Bruce added that key areas of focus for both clubs were health and wealth, reminding members to make a meaningful impact on their societies.

The President of the Rotary Club of Ikeja, Lagos, Mr. Sola Akinsiku on his part, said the donation was just the “beginning of the relationship between the two great Rotary Clubs”.

He said partnerships for more impactful projects in the society as called by the President of Rotary International, Jennifer Jones, was the best way to go, assuring that the future looks promising for Rotary Club of Ikeja, Lagos and Rotary Club Accra-Airport.

The Assemblyman for the Nii Larweh Electoral Area, Lawrence Nii Bortey Borquaye, who received the medical supplies on behalf of Cleantown Health Center, expressed gratitude to the two Rotary Clubs for their swift response to the request made by the health facility.

He noted that the gesture will impact positively in the lives of residents of Nungua and called for more of such assistance.

Similarly, the Senior Public Health Officer at the health center, Mr. Alfred Dom Boson, welcomed the support and expressed appreciation to the two clubs, urging other charitable individuals and organizations to emulate the gesture.

The Director of Service Project, Rotary Club Accra-Airport, Helga Boadi, on her part said “will continue to do good to humanity, especially, with its low-budget-high-impact activities” of which Cleantown Health Center is a beneficiary.

“What we brought to Cleantown Health Center today is going to make sure that when people visit the place, they are not going to leave with an infection. So, we expect that from what we’ve done, when people come here they get the best medical care possible”, she noted.

She was hopeful that the donation to Cleantown Health Center would assist all the eight (8) CHPS compounds under its control.