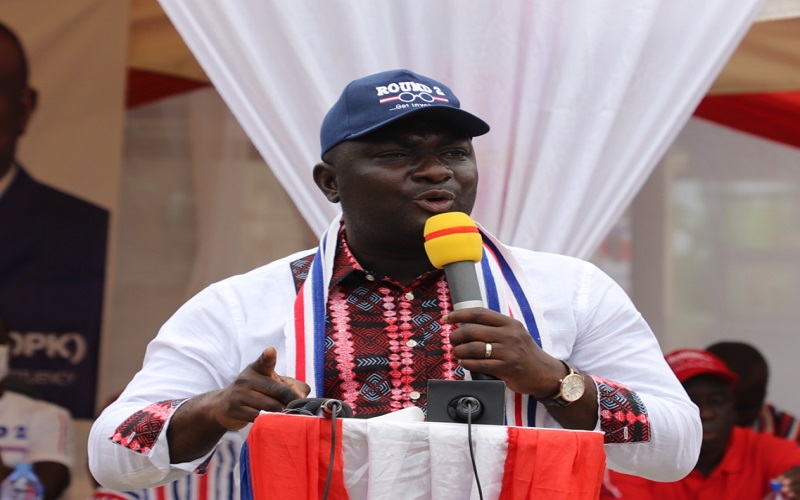 The Parliamentary Candidate for the New Patriotic Party (NPP) in the Mpraeso Constituency, Davis Opoku Ansah (OPK), has called on members of the Constituency to re-elect President Akufo-Addo to continue his ‘massive’ infrastructure gains in education and other sectors of the economy.

The NPP Parliamentary Candidate said the current government had made gains in educational policy and infrastructure, saying, a policy like the Free Senior High School (SHS) had more than 1.2 million students benefiting.

Mr Opoku, popularly called OPK, made these remarks at the inauguration of the party’s campaign team and working committees at Asakraka in the Constituency.

He said the government in addition to implementing its flagship Free SHS had also built infrastructure including school buildings to sustain the program across all SHS in the country. He touched on the achievement of the ruling party in absorbing the examination fees of all Junior and Senior High School candidates, sitting the BECE and WASSCE respectively. “As a mother or parent, what these monies mean to you is that you’ve been given additional money for your business and upkeep.”

He said the Akufo-Addo led government had also cleared the National Health Insurance Scheme debt it incurred and had made the scheme highly operational.

Mr Opoku advised the campaign team and working committees inaugurated to work hard for victory, adding that, the target of the party to win 30, 000 votes in the Constituency can be only achieved through hard work and dedication.

“Let’s forge ahead together and work hard for victory. Let’s put in our best in this campaigning season to deliver our targeted votes,” he said.

He promised to put the interest of the constituents first, saying, he would prioritize the social and economic needs of constituents in the provision of basic social amenities and employment opportunities.

The campaign team constituted the Parliamentary Candidate and Constituency Chairman who both are co-chairmen, together with the party’s Constituency executives as members.

The rest is a six-member team, advisory committee, volunteering committee, new media committee, election and research committee, among others.