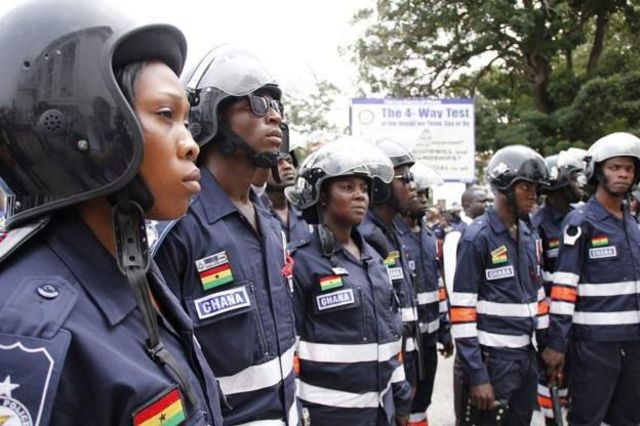 The Axim Divisional Police Command is said to have saved the life of a Metro TV cameraman who could have been thrown into jail for secretly filming a court proceeding involving the husband of the Member of Parliament (MP) for Evalue-Ajomoro-Gwira and a communicator of the National Democratic Congress (NDC).

The cameraman is said to have gone to the court in the company of a reporter from The Chronicle, Alfred Adams, to cover the said court proceedings in which Mr. Seth Afeku, husband of Hon. Catherine Afeku, had brought defamation suit against the NDC communicator, one Angate Borzah.

Alfred Adams, who for some strange reason, has a long standing feud with the Afekus, is said to have shown his media ID card to the court interpreter to allow him cover the said proceedings.

He then introduced the cameraman to the Court Interpreter as a Cameraman from Metro TV without showing his ID card.

The Court Interpreter, we understand, did not see the media ID card of the cameraman. Only that of Alfred Adams was shown for them to be allowed entry into the court room.

However, they were told not to film court proceedings since it was against the law.

The Court Interpreter, we further understand, is said to have even told the two media professionals to hold on until they get permission from the District Court Registrar before they could cover the proceedings.

When the District Court Registrar came, they (Alfred Adams and the cameraman) did not seek any permission from him.

The Chronicle reporter, we are told, was later allowed entry into the court room, whilst the cameraman was made to wait outside.

While in the corridors of the court building, the cameraman then started to secretly film the proceedings since one could easily have access to what was happening inside from where he was standing.

Unknown to him, the bodyguard of the MP was in plain cloth outside the courtroom watching every move he takes.

Eyewitnesses say, the cameraman placed the camera under his armpit and pretended he was doing nothing. Meanwhile, he was secreting filming the court proceedings.

Having monitored his movements for some time, the bodyguard of the MP approached him and asked him why he was secretly recording the court proceedings.

The cameraman then denied but the Policeman stood his grounds and then drew the attention of another policeman detailed at the court to what was happening.

That policeman then called the Divisional Police Commander and informed him of what was happening there.

In a twinkle of an eye, the Divisional Police Commander stormed the court premises and demanded to inspect what had been captured on tape by the cameraman.

According to eyewitnesses, the said Metro TV cameraman had on tape some recordings from the court proceedings that was ongoing.

The Divisional Police Commander, according our sources, instructed one of his boys to collect the camera for him.

The Police then took him to the Police Station to ascertain why he was recording a court proceedings which was a criminal offense.

At that juncture, the Western Regional Chairman of the National Democratic Congress, Nana Toku, proceeded to the Police Station to plead on behalf of this unidentified cameraman.

After his pleadings, the camera was given to the cameraman and he voluntarily, deleted the content in the presence of the Police at the Police Station.

This decision by the Police, we are told, was arrived at because of the good relationship that exist between them and the media.

“The Police Commander told him that he didn’t want to cause his arrest to create chaos and besides, it was an election year and wanted to maintain the peaceful atmosphere the district was enjoying”, one of the eyewitnesses who did not want his name to be made public recounted.

Sources within the Police have confirmed the incident but are rather surprised that an incident they handled peacefully has turned to be a confrontational issue in which the Western Regional Branch of the Ghana Journalist Association (GJA) whose Secretary, Zambaga Rufai Saminu, was a working colleague of Alfred Adam at The Chronicle newspaper, to issue a statement contradicting what transpired at the Axim Magistrate Court on Friday, July 10, 2020.

Per the dictates of the guidelines in the GJA Code of Ethics, a journalist should make adequate enquiries and cross-checks his/her facts before going ahead with any publication. It also urges journalists to make and verify the source of every information as well not to suppress news, information and materials on the basis of threats, inducements, and individual preferences or for personal gain.

Checks at the various police stations under the Axim Divisional Police Command and those near as well as the Regional Police Headquarters have revealed that the cameraman did not make any case of assault against the MP’s bodyguard in any of the Police Stations in the vicinity.

We are also informed by eyewitnesses that the MP’s bodyguard did not heckle the cameraman contrary to claims by the Secretary of the Western Regional GJA whose friend is Alfred Adams.

Also, this Regional GJA Secretary did not bother to even verify the other side of the story. He instead, went ahead to write what his friend, Alfred Adams narrated to him.

Efforts to reach the Axim Divisional Police Commander to comment on the issue proved futile as his mobile phone was either switched off or out of coverage area.

However, the Court Interpreter, Mr. Bright Kumah, when contacted confirmed the incident but denied ever seeing the MP’s bodyguard heckling the Metro TV cameraman.

According to the eyewitness, the Evalue-Ajomoro-Gwira lawmaker that the Regional GJA Secretary was trying to draw into the fracas was nowhere near where the incident happened. She was seated in the court room observing proceedings.

The MP for the area, Hon. Catherine Afeku when contacted, said she “has just been briefed about the incident and is doing further checks before she will comment on it”.