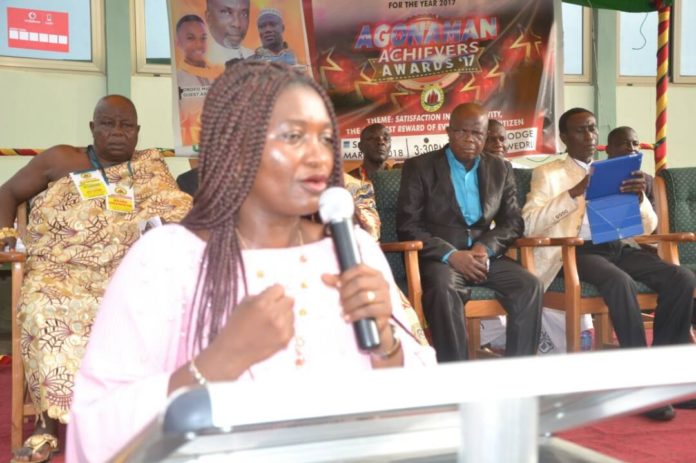 It appears the Municipal Chief Executive (MCE) for Agona West, Justina Marigold Assan, has no plans of changing her ways in sabotaging the President, Akufo-Addo’s administration, as her actions continue to deepen cracks in the New Patriotic Party (NPP) in the jurisdiction she is superintending.

Madam Assan herself, is a member of the NPP.
Over the past few weeks, tension keeps mounting in the Agona West Municipal Assembly over who becomes the next Presiding Member (PM) for the Assembly.

The Assembly in four consecutive times has failed to elect a Presiding Member.

This seems not to bother the MCE as deep throat sources in the Assembly have even fingered her as the one scheming things against her own government.

According to our sources, activities at the Assembly on Tuesday, September 15, 2020 came to a halt as there was confusion over the choice of the Presiding Member.

Members where sharply divided between the choice of the MCE and that of the Member of Parliament (MP) for the area.

While the elected NPP Assembly members are rooting for the MP’s choice, Mr. Solomon Forson, government appointees who are acolytes of the suspended NPP constituency chairman, Kojo Addo, together with the MCE, are also rooting for one Mr. Paul Akyirem, a known member of the National Democratic Congress (NDC).

Our sources say, prior to the election, the NPP members met and agreed on Mr. Solomon Forson from Nyakrom but the MCE was not happy and accused them for bringing the MP’s loyalist as the PM.

To the surprise of the members, just a day to the election, the pro NDC members also came up with Mr. Paul Akyirem of Ostenkrang Electoral Area.

Sources within the NDC say Mr. Akyirem was being pushed by the MCE against the choice of the MP and the NPP.

It was therefore not surprise when Mr. Akyirem garnered more votes than Forson.

Losing bonus were said to have even been paid to the Assembly Members who voted against Forson.

It is however, not clear who made that payment.

Justina Assan commenting on the event said she is not worried about the outcome of the election, since she knows very well that she won’t be the MCE for the area should Akufo-Addo and the NPP win the 2020 general elections.

“I’m not really worried at all. So, those who think they are bringing their preferred choice to come and worry have their level today. Whether the Assembly has a Presiding Member or not it is not my concern because I know I’ll not be the next MCE even if my party wins”.

Accusing fingers are now being pointed at the MCE and government appointees for working against the interest of the NPP in the area.

Below are the results of the election of PM for Agona West Municipal Assembly:

After 1st Round of voting, sorting, counting and declaration, these were the results as announced by the Electoral Commissioner:

The NDC candidate’s votes increased by six votes compared to the first round voting.

A Candidate needs to get at least 31 valid votes to be duly elected as PM.
Based on the above results, Agona West Municipal Assembly has still not been able get an elected PM.

Our checks revealed that the NDC has 18 Assembly Members while the NPP has 13 with government appointees including the MCE being 14.