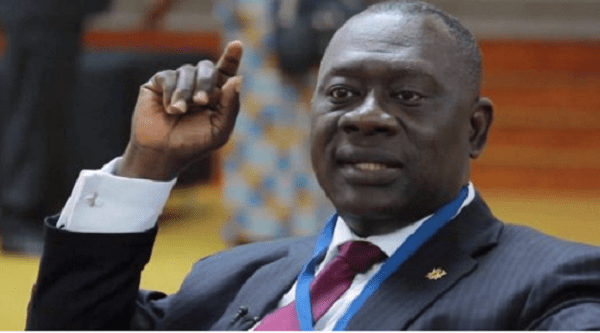 As the Electoral Commission (EC) prepares to compile a new voters’ register for the 2020 general election, a Deputy Minister for Local Government and Rural Development, Mr. O. B. Amoah has entreated eligible Ghanaians to actively take part in the upcoming voter registration exercise.

The registration, he pointed out, is necessary and compulsory for Ghanaians who want to occupy some public offices in the country.

According to him, no aspiring President, MP, Government appointee, Assembly or unit Committee member can afford not to register as it will be disastrous for their political future.

It would be recalled that Dr Ekwow Spio-Garbrah was rejected as Minister at vetting at one point under former President Jerry John Rawlings because he was not a registered voter.

Mr. O. B. Amoah who is also the Member of Parliament (MP) for Akuapem South in an article titled ‘Registration Is Compulsory for Some Ghanaians,’ explained that even though eligible Ghanaians have the right to vote and be registered as voters, nobody can force them to exercise that right.

However, he reiterated that it will be difficult for nonregistered voters to take public office or endorse people to take up same.

As the Supreme Court said in the Abu Ramadan case (Consolidated), “if the right to vote is important in participatory democracy, the right to register is even more fundamental and critical. It is the golden key that opens the door to exercising the right to vote.”

According to Mr. O. B. Amoah, “It is our right to vote and we are entitled to be registered as voters but it is not compulsory to register to have the right to vote.

“Indeed, even though the Electoral Commission is compelled to compile the register of voters and revise it at such periods as may be determined by law, we can simply ignore them and go about our business.

“Of course, we should then agree for those who decide to register to vote to choose our Government for us while we wait for four more years after elections”.

The Akuapem South MP noted that the phrase, “unless he is qualified to be elected as a member of Parliament”, is found in various parts of the Constitution.

He said the necessary implication is that such a person must, among other requirements, be a registered voter.

Mr. O. B. Amoah averred that per Article 62 (c), it is compulsory for a person who wants to be President of Ghana to be a registered voter.

Again, Ministers and deputy Ministers of state, the Speaker, members of various Commissions like the Public Services Commission, Lands Commission and National Commission For Civic Education are required to be registered voters.

Furthermore, Mr. O. B. Amoah averted the minds of Ghanaians to the District Assembly Elections Act, 1994 (Act 473) which provides under section 9(1) that “a person qualifies to be elected to a District Assembly or a lower local government unit if that person (b) is a registered voter”.

He explained that any citizen who aspires to be an Assembly member or unit Committee member must necessarily be a registered voter.

This statutory requirement, he maintained, is also provided in the District Level Elections Regulations, 2015, C. I. 89 under Regulation 3(1)(b).

Nomination of Candidates for Elections

“In the case of a presidential election, a person nominated for election as President requires endorsement of not less than two persons who are registered voters resident in the area of authority of each District Assembly, as provided under Article 63(1)(b) of the Constitution.

“Endorsements from registered voters are therefore needed for Presidential, Parliamentary and District Level Elections as the relevant legislation provides”, he reiterated.

Accordingly, Mr O. B. Amoah has entreated citizens to be registered voters even if the right is not compulsory because “it affords us the opportunity to be elected in public elections, appointed to public office or to endorse persons to contest positions, apart from the use of the voter identification card for other purposes, including voting to choose our leaders and representatives”.