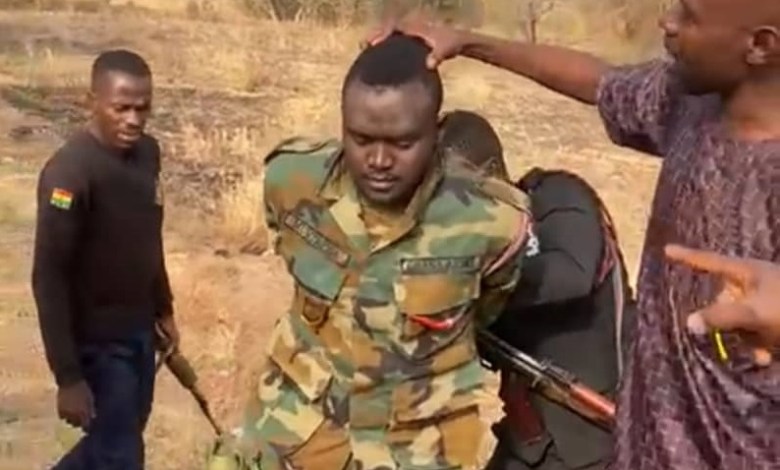 The Ghana Armed Forces (GAF) say there was no soldier was among the five car snatching syndicate who were arrested at Buipe in the Savannah Region following a robbery in Tamale.

In a statement released on Monday, January 24, 2022, signed by its Acting Director, Public Relations, Commander Andy La-Anyane, the GAF said even though one of the five arrested suspects was wearing a military uniform, the said car thief is not a soldier of the Ghana Armed Forces.

“We wish to state categorically that the suspect is not a soldier of the Ghana Armed Forces”, the statement released by the GAF in part read.

The Army it was worried about the rising spate of impersonation by civilians, either wearing military uniforms or posting of fake pictures of themselves as military officers to defraud unsuspecting Ghanaians.

It urged the general public to be circumspect in dealing with persons who pose as military personnel.

On Sunday, January 23, 2022, the Police in Buipe arrested a car snatching syndicate made up of five members.

The five suspects had snatched a Toyota Camry Salon car from its owner at a residential area in Tamale and bolted away with it.

According to a Police message, the syndicate after snatching the vehicle and some other items from its owner, fled towards Buipe direction. This was after the men and women in black uniform received information about the car hijacking where they also relayed same information across their various check points to be on the lookout.

“The Buipe Highway Patrol Team on duty at Sawaba Police checkpoint on Buipe – Tamale highway intercepted and arrested occupants of two vehicles with registration number AS 8445 – 19 and GX 6923 – 20”, the Police message in part read.

Among the five arrested were Ibrahim Issah, 27, a contractor from Accra, Mohammed Mustapha who was in military uniform, aged 23, and resides in Burma Camp, Vivor Christopher, 27, a mobile phone repairer, Benjamin Ajyei, 23, a mobile money vendor and Seyram Addo, 29, a blumber who resides in Danfa/Madina.