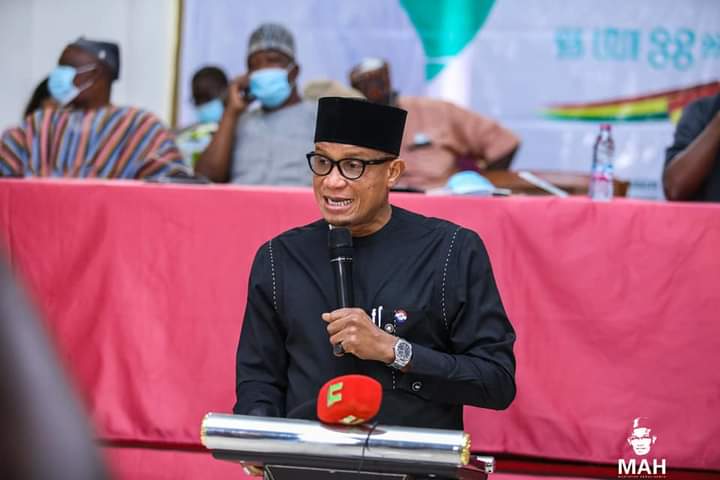 The New Patriotic Party (NPP) has reminded Ghanaians that the flag bearer of the National Democratic Congress (NDC), John Mahama, as President from 2012 to 2016, failed woefully to deliver on the majority of his 2012 Manifesto promises.

Therefore, voters must treat candidate John Mahama’s repackaged promises for 2020 as another empty set of promises.

Speaking at a press conference in Accra Monday, September 7, 2020, ahead of the NDC’s 2020 manifesto launch that same day, the Deputy Campaign Manager of the NPP, Dr. Mustapha Hamid, said that the threat by the NDC presidential candidate to be be given a second chance to “correct his mistakes” is to treat “your vote as a correction fluid,” which is not the case.

He warned Ghanaians against being swayed by the NDC lies and propaganda and to keep in mind the pain and sufferings John Mahama took the nation through when the NDC leader had the chance to offer competent leadership – Infact he ended doing the exact opposite.

Dr. Hamid stressed that the December 2020 contest is, first, about which leader has shown in office that he is capable of delivering.

He rolled out a long list of 2012 manifesto promises which the NDC under John Mahama failed to fulfill. Key ones included specific promises to manage the economy, which turned out to be President John Mahama’s biggest albatross and the consequences were dire, leading to several payments and reliefs being cancelled and a mountain of arrears owed to contractors all left to the NPP to fix.

The NPP Deputy Campaign Manager called on Ghanaians to measure manifesto pledges of the two main political parties against the respective track records of their two candidates, Nana Akufo-Addo and John Mahama, before making a choice on president and MP on December 7, 2020.

Dr. Hamid said, “Whereas President Nana Akufo-Addo has, in less than 4 years, proven to be a promise keeper through competent and decisive leadership, John Mahama has demonstrated that he lacks the credibility required to fulfill promises he makes to Ghanaians.”

He added: “On the basis of the above, I want Mr. Mahama to tell Ghanaians what he wants to do in the next 4 years that he could not do in his 8 years of NDC as Vice President and President?

“Fellow Ghanaians, the choice in December should be a leader who has a clear vision for the country, demonstrable integrity, courage, decisiveness, and the passion to position Ghana Beyond Aid, while enhancing the dignity of the Ghanaian. That choice can be none but the promise-keeper, President Nana Addo-Dankwa Akufo-Addo.”

Dr. Hamid, who is also the Minister for Inner City & Zongo Development, mentioned a litany of failed pledges.

They included the following, in his words:

“1.       To begin with, let us ask Mr Mahama, what happened to the promise to address systematically, the bottlenecks in production and transmission of power, and bring to an end the problem of erratic power supply by the end of 2013? The answer to this question, Ladies and Gentlemen was the exacerbation of the problem which led to the infamous DUMSOR crisis.

“3.       The NDC also promised to establish a new public University in the Eastern Region but only organised a sod cutting ceremony few weeks to the 2016 general elections, an obvious attempt to hoodwink voters. As we speak the NPP under the leadership of Nana Addo Dankwa Akufo-Addo has completed this university.

“4.       The NDC promised to expand the NHIS benefit package to cover family planning, mental health, prostate cancer and the physically challenged. Can any Ghanaian attest to the fulfilment of this promise? They failed to deliver.

“5.       The NDC further promised to establish Job and Enterprise Centres (JEC) in all regions to help unemployed youth. Characteristic of the NDC, Ladies and gentlemen, this never happened.

“6.       They also promised that through the Savannah Accelerated Development Authority (SADA), they would co-invest in leading agro-industrial establishments and increase the number of shea-nut factories from 1 (in Buipe) to 3 (one each in the Upper East and Upper West regions). It will surprise you to know that it was in 2019, under the NPP’s enviable One District, One Factory programme that a shea butter factory was operationalised in Sheaga in the Talensi District of the Upper East Region,” Dr. Hamid said.

Commenting further, Dr. Hamid said President Akufo-Addo has done a lot over the past three years, making him a promise keeper who deserves another term in office.

He stressed that the ruling NPP has made in roads in almost every sector of the economy and Ghanaians need to see the protection of those gains as critical before John Mahama sends the country backwards again.

The NPP leading member mentioned a few of such gains as follows:

“The Akufo-Addo-led administration has also kept its manifesto promise by restoring teacher trainee allowance which was cancelled by the insensitive Mahama government. The restored allowance has since 2017, benefitted over 48,000 teacher trainees.  Infact President Mahama Syed categorically that he will not restore the teacher allowance – even if it will cost him the election.

Further, the Akufo-Addo-led administration has recruited over 70,000 young men and women to provide teaching and non-teaching services across various educational institutions since 2017.

“The NPP has revived the National Health Insurance Scheme (NHIS) which was at the brink of collapse by settling the over GH¢1.2 billion debt accrued under the erstwhile Mahama administration. This has resulted in an extended health coverage for over 12 million Ghanaians, most of whom would have been denied access to health care due to the NDC’s mismanagement of the scheme.

“The industrialisation drive of the NPP is underpinned by its centre-right ideology and the belief in the private sector as the engine for economic growth on the one hand whilst providing social intervention policies to cater for health, education etc for those who need to be assisted.  The NPP government believes in prosperity for ALL.  As has been the case, the ruling NPP government, since 2017, has pursued strategies aimed at creating an enabling environment for the private sector to thrive.

“1.       Against this backdrop, the Akufo-Addo-led administration has been religiously committed to initiatives such as:

“2.       The One-District-One-Factory flagship programme, which seeks to provide support for the private sector in establishing factories in all districts across the country

“3.       The National Entrepreneurship and Innovation Plan, a strategy for training and resourcing entrepreneurs and start-ups and

“4.       The Ghana Commodity Exchange, a scheme that provides a regulated market that connects buyers and sellers.”

He cautioned Ghanaians that the presidency is not for experiments and that John Mahama cannot be given another four year term to make further mistakes with the lives and livelihoods of tens of millions of Ghanaians.