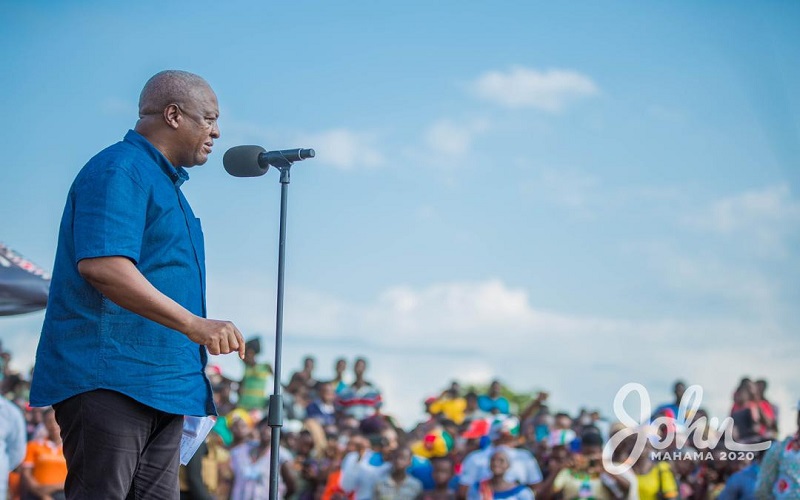 The Flagbearer of the National Democratic Congress (NDC), John Dramani Mahama, has announced that his government will establish a salt factory at Gomoa Nyanyano.

According to the former President the establishment of the factory will boost the local economy and give employment to the youth of the area.

“The salt industry will be boosted in Gomoa Nyanyano. After we have set up the salt factory, it is the youth of this area who will get employment” he assured.

The NDC leader was speaking at a meeting with fishermen and fishmongers at Gomoa Nyanyano on the first day of his tour of the Central Region.

He lamented the current practice under President Nana Akufo-Addo where NPP officials have usurped the responsibilities of the landing beach committees established by the NDC, and are distributing premix fuel, outboard motors and other fishing inputs, in a partisan manner.

He therefore promised that when the NDC returns to office, he would reinstate the landing beach committees under the stewardship of the chief fishermen, and work without any partiality or consideration for party affiliation.

The NDC Presidential Candidate also reiterated a promise first made in 2016 to build a community day secondary school for Gomoa Nyanyano adding that even though he could not win the 2016 elections to fulfil that pledge, he is confident of winning the 2020 elections and will therefore fulfil the promise.

He assured the people that the cold stores project begun by the NDC and abandoned by the Akufo-Addo government would be continued. Mr. Mahama also promised to build for them wharfs and complete the road leading to the community.