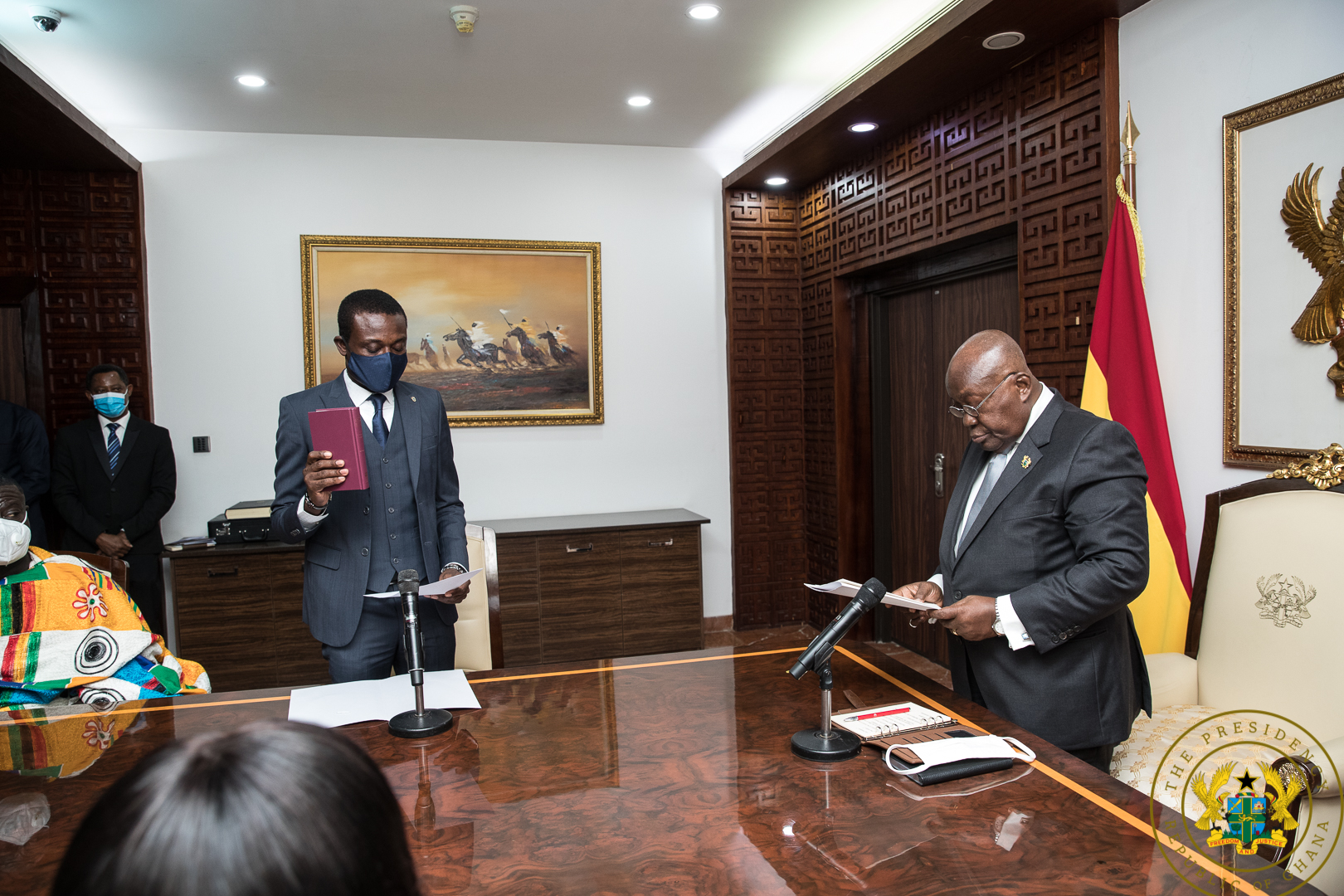 The President of the Republic of Ghana, Nana Addo Dankwa Akufo-Addo, on Thursday, August 5, 2021, swore into office the second occupant of the Office of Special Prosecutor, Mr. Kissi Agyebeng, at a brief event at Jubilee House, the seat of the nation’s presidency.

Citing the new Special Prosecutor’s extensive educational and professional legal background, President Akufo-Addo stated that “it is clear that Mr. Kissi Agyebeng is eminently qualified to occupy the Office of Special Prosecutor. He has the capacity, the experience, the requisite values and intellectual strength to succeed in this vital position”.

Congratulating Mr. Kissi Agyebeng on his appointment, the President stated that the “wide acceptance of his nomination by the Ghanaian people, and the nature of his performance during Parliament’s approval process are, for me, indications that the confidence I reposed in him, to discharge one of the most critical functions of State, was not misplaced.”

Addressing the gathering, which included Chief of Staff, Hon. Akosua Frema Osei- Opare; Attorney General, Godfred Yeboah Dame; and MP for Mpraeso, Hon. Davis Opoku Ansah, the President reiterated that the creation of the Office of Special Prosecutor was borne out of the commitment to fashion an additional instrument to fight the canker of corruption.

“The genuineness of that commitment to create an independent, non-partisan body with the relevant professional capability, to lead the fight, and hold public officials, past and present, accountable for their stewardship of public finances, was made manifest in the appointment of a very senior figure from the opposite side of the political divide to establish and head this very significant Office. This appointment, as you would all recall, was met with stiff opposition by some members from both sides of the aisle,” he said.

President Akufo-Addo continued, “In spite of the unfortunate events that led to the departure of the first occupant of the Office, I do not regret making that appointment. On my part as President of the Republic, I ensured that the Office was adequately resourced to enable it carry out its mandate. I am, however, consoled by the oft-cited statement that there is no use crying over spilt milk”.

Thus, when the Attorney General and Minister for Justice, Godfred Yeboah Dame, on 16th April 2021, moved to nominate Mr. Kissi Agyebeng, under section 13(3) of Act 959, for consideration as the second occupant of the Office of Special Prosecutor, the President indicated that he had little hesitation in accepting the nomination.

He, therefore, urged Mr. Kissi Agyebeng to bear in mind at all times that the Office carries an extraordinary responsibility to fight corruption independently and impartially, describing the remit of the Office as broad and challenging.

“I want to assure Mr. Kissi Agyebeng, like I did his predecessor, that not only will the Executive, including the Attorney General, respect scrupulously the independence of his Office, but will also provide him with whatever assistance is required to enable him discharge his high duties effectively, in the interest of the Ghanaian people. Indeed, all institutions of state will work and co-operate with him in the same spirit, which he articulated at his approval proceedings in Parliament,” President Akufo-Addo assured.

Whilst acknowledging that the activities of the Office of Special Prosecutor, no matter how vigorous, cannot provide the entire panacea to the problem of corruption, the President urged other institutions of State to co-operate with the new Special Prosecutor.

“Government will continue to give stronger budgetary assistance to the other constitutionally mandated institutions that hold government accountable, and help fight corruption, i.e., the Auditor General, Parliament, Judiciary, the Police Service, the Ministry of Justice, the Commission on Human Rights and Administrative Justice (CHRAJ), and the Economic and Organised Crime Office (EOCO),” he added.