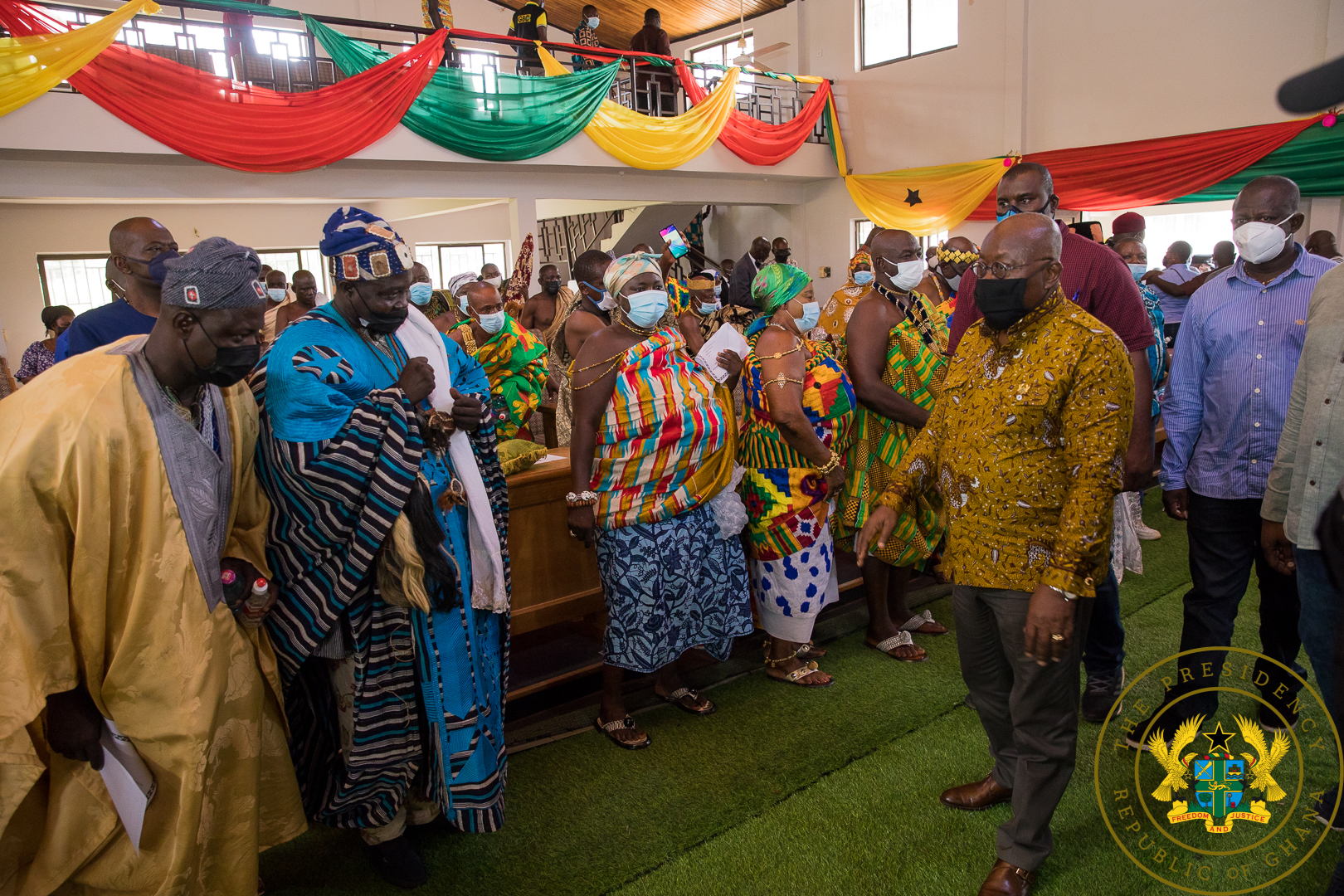 The people of Kintampo says they are huge indebted to President Akufo-Addo for his good works in their locality.

The Krontihene of the Mo Traditional Area, Nana Adjei Adinkra II, who on Saturday, August 8, 2021, had a meeting with the President at Kintampo, when the latter commenced his two-day working visit to the Bono East Region, said the people of the are will forever remain grateful to the number gentleman of the land for not neglecting them.

“We, the Chiefs and people of Kintampo, remain indebted to you for the good works that you have done in our Municipality, through your good policies, programmes and projects in the various sectors of the economy, all aimed at improving the lives of our people. Your flagship policies easily come to mind”, he noted.

According to the Krontihene, the flagship policies have had a tremendous impact on the lives and livelihoods of the people of Kintampa include the Programme for Planting for Food and Jobs, which, he explained, has “made fertilizers and seeds available to our farmers, leading to increase in yields.”

Again, Nana Adjei Adinkra II indicated that Planting for Export and Rural Development (PERD), another flagship programme of the Akufo-Addo government, has ensured that cashew farmers in the Kintampo Municipality have been supported with the free distribution of 100,000 cashew seedlings.

The Kintampo Chief cited the 12-unit block, with a 6-seater toilet facility and a single storey dormitory block, under the Emergency GETFund Projects across the country, as examples of projects that have been constructed and completed to bridge the infrastructure gap in these senior high schools.

He thanked President Akufo-Addo for the location of the Regional Health Directorate in Kintampo, which is in fulfilment of his promise not to concentrate all decentralised institutions in the newly created regions in the capitals.

“The construction of a mango juice processing factory at Habitat, a suburb in Kintampo, is in line with the One-District-One-Factory (1D1F) programme, under the Rural Enterprise Project. This Project will provide our teaming unemployed youth with jobs when the Project is finally completed. Similarly, the Assembly in collaboration with PRODESOP, an NGO and with funding from the European Union, has also constructed a Ginger Processing Factory at Chiranda,” Nana Adjei Adinkra II said.

He continued, “The construction of a Business Resource Centre under the same REP within the Assembly’s premises will provide business support and the needed entrepreneurial skills to small businesses in the Municipality. We are, indeed, grateful for that.”

The Krontihene also acknowledged the grading and routine maintenance works which were carried out on selected roads under the Department of Urban Roads in 2020, adding that “the same year also witnessed the construction of about 500 metres of roads in Kintampo Zongo township under the Zongo Development Fund. This is a landmark achievement under your government.”

“Nananom and the people of Kintampo will forever cherish the beautiful and magnificent Dual Court Facility which has been constructed and fully furnished by the Municipal Assembly, and which you are here to fully commission. This is a significant achievement in improving judicial infrastructure. The facility is intended to house the District Court, which has been operating in an unsuitable building, as well as to house another Court,” he added