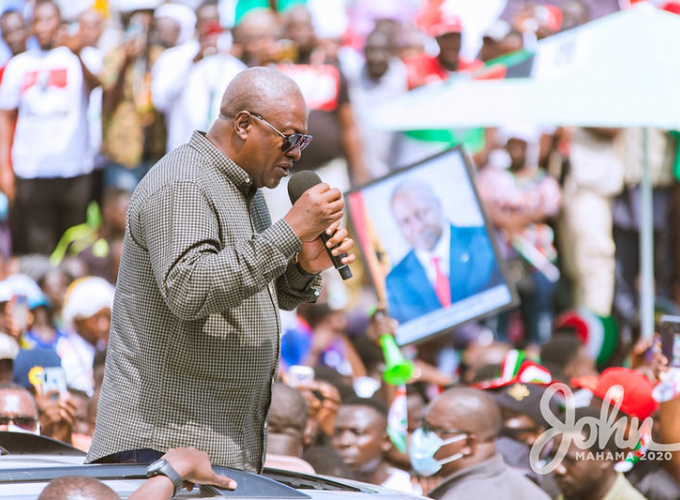 The flag bearer of the National Democratic Congress (NDC), John Mahama, on Tuesday, November 10, 2020, begun his campaign tour of the Ashanti region.

Mr. Mahama will tour the region for six days, a statement from the party said.

“His Excellency John Mahama, as part of this highly anticipated tour, is expected to pay a courtesy call on His Royal Majesty, Otumfour Osei Tutu II. Whiles in the region, President Mahama would interact with Traditional and religious leaders, Chiefs and opinion leaders, Professional groups, Artisans, Party members and sympathizers among other interest groups.

“Our Leader and Flagbearer, President Mahama would use the tour to tout his Superior track record in terms of monumental and life changing achievements in Asanteman and to explain the vision and policies of the next NDC government as contained in the widely accepted “People’s Manifesto” to the good people of Ashanti Region,” the Ashanti Regional branch of the party said.

The statement added: “Ghana’s next President, H.E. John Mahama is expected to make a triumphant entry into the Ashanti region at the Kumasi Airport on Tuesday, November 10, 2020 and the Secretariat urges Constituency executives, Parliamentary Candidates, Branch Executives, Stakeholders, Party Members, Sympathizers and the general public to be at the Airport at 9 a.m prompt to give President Mahama a rousing welcome”.