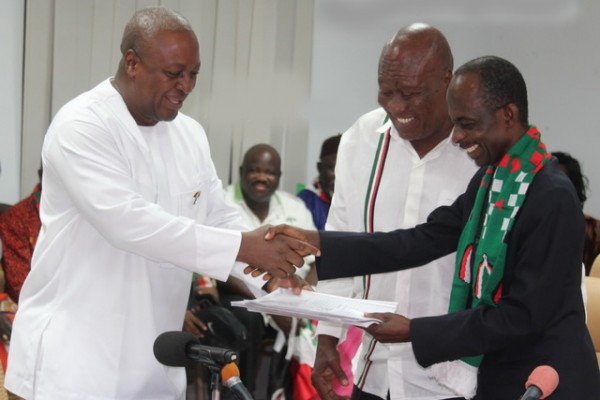 The General Secretary of the opposition National Democratic Congress (NDC), Johnson Asiedu Nketiah, has confirmed that he is highly interested in partnering Mr. John Dramani Mahama, as his running mate for the 2020 general elections.

However, he said such dream could only be accomplished if he is appointed the flag bearer and supported by the Council of Elders and National Executives Committee of the party.

Despite he being interested in the running mate position of the umbrella family going into the 2020 general elections, Mr. Nketiah, popularly known as General Mosquito, said he will not campaign for the position.

He told GHOne TV’s Serwa Amihere in an interview on Tuesday, May 19, 2020, that the running mate position of the NDC is not a position to contest for that is why nobody has seen him going round the country to campaign for the position.

“I look at the responsibilities so if you are asking me whether I am prepared to carry out that responsibility, I will say yes I am prepared to carry that responsibility if in the opinion of the flag bearer and others I should carry it to enhance our chances of winning. I won’t run away from that. But beyond that, I am not campaigning to be running mate because it doesn’t take a campaign to be a running mate. It’s the decision of the flag bearer supported by the Council of Elders and National Executives Committee. That is why you haven’t seen me going anywhere telling people that I want to be running mate this is my campaign team and this is my message and so on. When I was contesting as a General Secretary I did that because I know that what will get me to be the General Secretary will be the contest but this one there is no contest”, he noted.

When asked what he will bring on the table when appointed to partner Mr. John Mahama, he said “the question you are asking me is like somebody who comes to face the Parliamentary Committee for Vetting and then they ask you what is in you that President Akufo-Addo saw and appointed you. How can any nominee answer that question? You need to go and ask the appointing authority. So, if I am appointed, and you are interested in what you think I can bring on the onboard, you will find out from the person who identified what he thinks he needs to win the elections”.