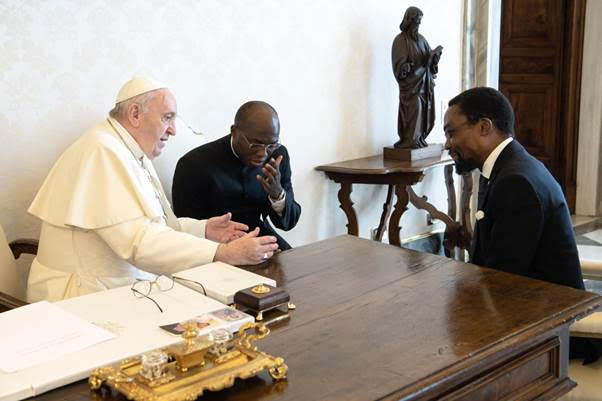 The President of the International Criminal Court (ICC), Judge Chile Eboe-Osuji, was received by His Holiness Pope Francis at the Vatican on September 3, 2020. The ICC President also met with the Secretary for Relations with States, Archbishop Paul Gallagher, during his official visit to the Holy See.

During his audience, the ICC President briefed His Holiness on the Court’s latest judicial developments as well as its achievements and challenges in fighting impunity for genocide, crimes against humanity, war crimes and the crime of aggression. He recalled the traditional role of the Holy See in anchoring and disseminating the message of peace to all humanity, and emphasized that that message resonates strongly with the mandate of the ICC, which is to reduce warfare and the devastating effects of armed conflicts through the rule of law.

The ICC President drew parallels between the coinciding values of the Holy See and the ICC, including supporting human rights and the rule of law, preventing human suffering brought by armed conflict, protecting the most vulnerable people, rebuilding communities and societies shattered by violence, and bringing messages of hope for a better future. In that sense, he underscored the union of purpose between the Holy See and the ICC in the pursuit of peace for humanity: the Holy See being a foremost spiritual agency for the message of peace, while the ICC seeks to discharge its mandate as an important temporal instrument for the actualization of peace.

The ICC President relayed how further, global support is needed for the Court. Referring to the current challenges to global values of peace and justice, he asked for support to encourage States to ratify the Rome Statute – the founding treaty of the Court – and desist from attacking the Court as it fulfills its functions. Through such support for the system of international criminal justice and the Court’s continued work, he said, dividends of peace through justice will inure to the benefit humanity wherever such dividends are in urgent need.