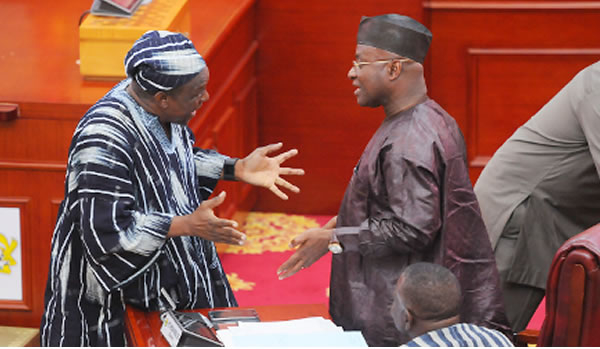 The Majority Leader, Osei Kyei-Mensah-Bonsu, has said that there is no way he, as the leader of Parliament and Government Business, will go public and oppose remarks the Speaker, Rt. Hon. Alban Sumana Kingsford Bagbin, makes in the Chair when presiding over sittings.

Addressing Members of Parliament (MPs) at a sitting presided over by Rt. Hon. Bagbin on Tuesday, May 31, 2022, the Majority Leader said what has ensued between him and the Speaker was borne out of a communication mix-up and described the Speaker’s warning to him as unfortunate.

At a sitting on Friday, May 27, 2022, Rt. Hon. Bagbin sent a notice to Kyei-Mensah-Bonsu who doubles as Minister for Parliamentary Affairs, warning him not to counter remarks he makes in the Chair again.

According to him, he has had enough of the shenanigans of the Suame MP all in an attempt to undermine his authority.

His statement was triggered after the Majority Leader was reported to have described as false claims by the Speaker that the Finance Minister, Ken Ofori-Atta has starved the House of funds for their operations for this year in a radio interview.

A not too visibly angry Rt. Hon. Bagbin told the House that Kyei-Mensah-Bonsu must appreciate that he is the Speaker of the House until members decide to change him or his tenure ends.

“In Ghana, Parliament is not supreme. It is subject to the constitution and so it is important that when the Speaker speaks from the Chair, the Leader of the House is not seen to be the one countering the spokesperson of the arm of government says and if they want us to give documentary evidence of the non-funding of the House for this year, we will provide that. So, when I heard the Leader of the House has gone on air to say that what I said was not true, it saddens me. In response to what I said yesterday, the government proceeded to release money yesterday and there is evidence to that”, he fumed.

He added “I will not take the Majority Leader who is going on air to counter what I said, particularly, when I said it in this chair. I will not take that. I am in control here and I will continue to be in control until my term of office ends or you decide otherwise as Members to remove me as Speaker of the House by the votes of three quarters of Members of Parliament. Please this is the last time I will refer to it and this is enough notice to whoever thinks he has same authority as the Speaker. Enough is enough”.

However, in laying bare the facts, presumably, to win back the love of the Speaker, Kyei-Mensah-Bonsu detailed the role he played in getting GH₵25million released to Parliament when his attention was drawn to the dire financial situation of the august House by the Clerk to Parliament and the Director of Finance.

“Last Friday, I was not in the House. It seems to me that there was some communication mix-up on account which the Speaker made a statement related to some information that I had sent out in the public space. You may recollect that on Wednesday, May 25, 2022, we had a visit to this House by His Excellency the President of Mozambique. After that event, I needed to attend a Cabinet meeting that had been programmed for that Wednesday. Whilst I was preparing to attend that meeting, the Director of Finance and the Clerk [to Parliament] came to me to discuss the status of our finances in the House. In their presence, I called the Controller & Accountant General that it appears the situation was dire and he responded that he thought some releases had come to this House. So, he asked us to stay on the phone, crosschecked and then came to the determination that it appears there was a hitch that they were going to clear it and have some amount released to the House that very day”, he narrated.

He continued “I insisted that it should happen by close of day and so after a while, he promised that, GH₵25million was going to be released. I put the phone on loud speaker and the Clerk of Parliament and the Director of Finance heard me. I then left for Cabinet meeting. My phones were left behind [as it was the rule]. Later, when we closed around 10:30 in the night, I saw the Controller & Accountant General had called me on numerous occasions but it was too late to return his calls. Early the following morning, 8:15, I returned his call and he told me that the GH₵25million had been released to Parliament. So, I called the Clerk to Parliament to reconcile and to re-confirm that yes indeed that had happened.”

Explaining further, he said “Thursday I was not in the Chamber. I had to go to Kumasi. It appears to me that the Speaker was not aware that that amount had come to Parliament so he made the statement to the extent that Parliament didn’t have money to run our usual business. Friday morning, I had these radio presenters called me that the Speaker had made this statement and they needed to call me for my reaction. My reaction was that oh it’s not entirely the truth. That some amount had been released to Parliament and that we would have to have a meeting with the Finance Minister and the Controller & Accountant General so that we will have regular releases to forestall these matters because these things have been in Parliament over the past years and we need to bring it to a closure – if to arrange that monthly we should have releases – that was the statement I made. Apparently, some communication was made to the Speaker that in public space I had contradicted him and so on. So, the Speaker came to the House and made some statements I considered it unfortunate”.

The Speaker in a sharp response thanked the Majority Leader for the steps he has taken to clarify the situation but noted that the GH₵25million released to the House was part of the arrears for GH₵84million for last year.

“Parliament was to be given GH₵54million to enable us implement the program for the 1st quarter. We were actually given GH₵7 million. The GH₵25million that was released is part of our arrears for GH₵84millon for last year. We are giving you this information so that Leadership and Speakership are not blamed for not responding positively to the request of members and committees to transact their business. It is because the there is not there”, he explained.

He noted that the GH₵25million released to Parliament even went to their creditors whom he said are even angry at Parliament for not paying them on time.

“The GH₵25million released on Thursday as part of the arrears of 2021 went to our creditors and I can tell you that we are losing face because anytime we requested for support again, the creditors didn’t want to respond because we owe them for far too long. That is the situation we have”, he noted.

According to the Speaker, it was important as proposed by the Majority Leader, to have constant meetings of Leadership and Speaker with the President of the land, the Controller & Accountant General and the Minister of Finance to prioritize releases to Parliament since they are not in the same category as that of the Metropolitan, Municipal and District Assemblies (MMDAs).

“Parliament is an arm of government and if we fail to function, then the whole democracy fails in the country and then we will be back to tyranny and it is individuals that will determine what your interests and rights are. I think that Ghanaians have committed themselves to move away from that and to journey along the process of democracy. It is a long journey because there is no end to it”, he underscored.