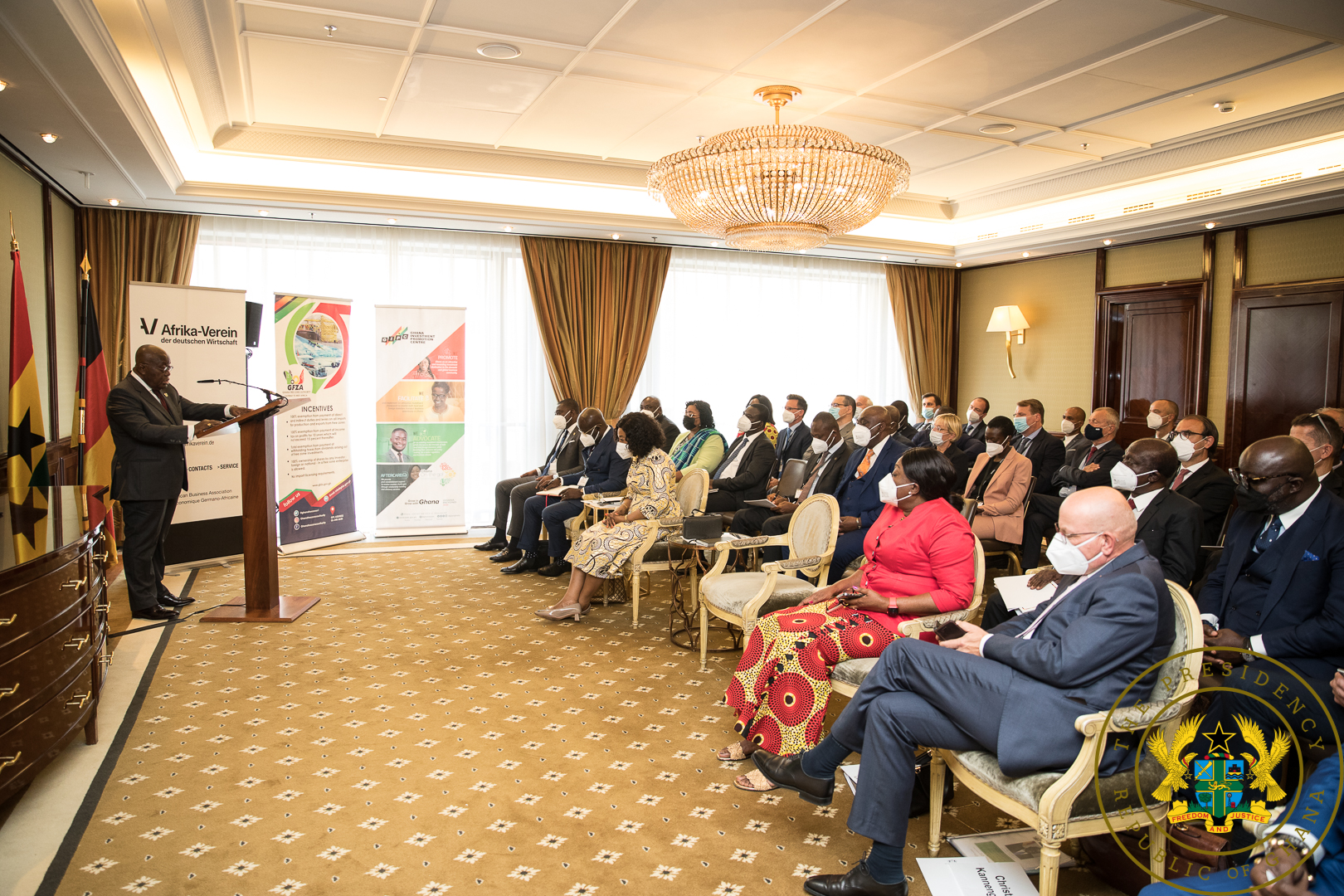 The President of the Republic of Ghana, Nana Addo Dankwa Akufo-Addo, has said that the West African nation will continue to create an enabling environment that will guarantee the safety investments and also ensure good returns.

“We will continue to create and maintain the conducive investment environment that not only guarantees the safety of investments, but good returns as well. We will continue to protect legitimate investments, and preserve the atmosphere of peace, stability and security that has been an important contributor to the increasing presence of German businesses in Ghana”, he noted.

President Akufo-Addo made this observation on Tuesday, 24th August 2021, when he addressed the Ghana-Germany Business Forum, in Dusseldorf, as part of his working visit to the Federal Republic of Germany.

He indicated that Ghana is a country where the principles of democratic accountability and respect for the rule of law, individual liberties and human rights are now firmly entrenched in our body politic, and where the separation of powers is real in promoting accountable governance.

Since assuming office in January 2017, he explained that his government has put in place measures needed to reduce the cost of doing business, improve the business environment, and made the Ghanaian economy not only one of the most business-friendly economies in Africa, but also one of the fastest growing economies in the world between 2017 and 2020, averaging annual GDP growth rates of 7% for those years, up from the 3.4% GDP growth rate inherited from the Mahama government in 2016.

“Indeed, with the economies of many countries around the world in recession, having recorded negative growth in 2020, largely as a result of the COVID-19 pandemic, Ghana’s economy was one of the very few that still managed to record a positive GDP growth, albeit a very modest 0.9%,” he said.

The President continued, “In spite of the ravages of the pandemic, we are working to grow the economy at a much faster rate this year, our target being a five percent (5%) GDP growth rate, which will enhance the prospects of a win-win environment for both private sector and country; an environment where companies do not just survive, but actually thrive. In the first quarter of this year, the GDP of the economy grew at 3.1%; in the second, at 8.9%.”

He was, thus, encouraged by the fact that more German companies than ever are looking to invest in Ghana, symbolised by the opening of representations of German industry giant, ThyssenKrupp, and the German logistics global player, Kühne & Nagel, in the country, and the establishment of the Volkswagen Assembly Plant in Ghana.

“It continues to be an exciting time to be in Ghana, and to do business in the country. Already, other global car manufacturing giants, Toyota and Nissan of Japan, Sinotruk of China, have also established assembly plants in the country. Twitter is establishing its African Headquarters in Ghana, Google’s first African Artificial Intelligence Centre is located in Ghana, and the well-known Norwegian energy company, Aker, is very much established in Ghana,” the President said.

He told the Forum further that Ghana is further privileged to play host to the Secretariat of the African Continental Free Trade Area, which represents, currently, a market of some 1.2 billion people, spread over fifty-four (54) countries, with a combined GDP of $3 trillion.

With records from the Ghana Investment Promotion Centre indicating that there has been a total of one hundred and ninety-two (192) projects, with an FDI value of US$83.92 million, registered from Germany within the last decade, he urged the business community in Germany to take advantage of the business-friendly climate in the country to invest in Ghana.

He recommended government’s flagship policies such as “One District, One Factory”, “One Village, One Dam”, and the programme for “Planting for Food and Jobs”, as well as in areas in the water, health, housing, road and rail infrastructure, transport, industry, manufacturing, agriculture, petroleum and gas, the exploitation of our mineral wealth of bauxite, iron ore and gold, renewable energy and ICT growth sectors.

“We are hopeful that, with solid private sector participation, we can develop a modern railway network with strong production centre linkages and with the potential to connect us to our neighbours. Indeed, Ralf Blankenbach and Havellandische Eisenbahn of Germany are part of a European consortium engaged in the $1.8 billion rehabilitation of the existing Eastern Railway line from Accra to Kumasi,” he added.