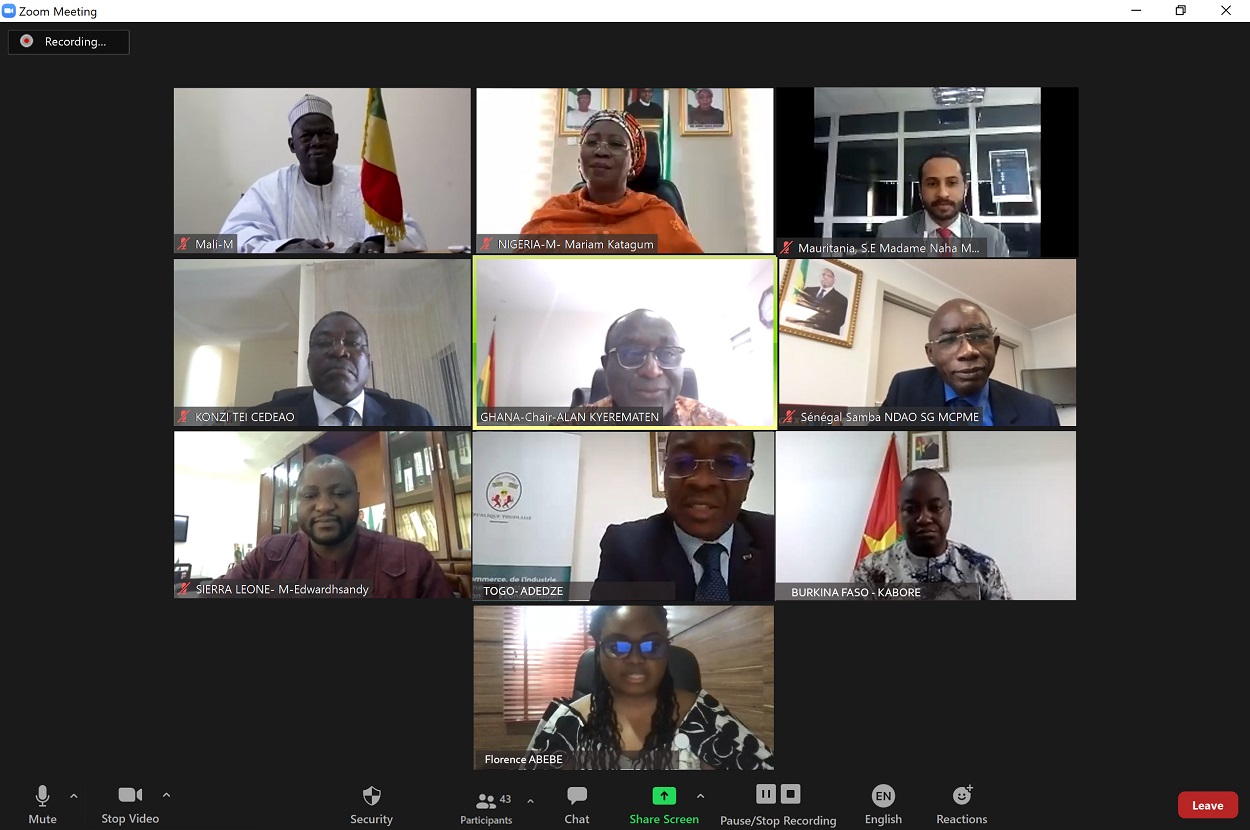 The ECOWAS Ministers of Trade (ECOMOT) met virtually on the 22nd of October 2020 to discuss recent regional and continental trade developments and make recommendations to the ECOWAS Council of Ministers.

Declaring the meeting open, the ECOWAS’ Commissioner for Trade, Customs and Free Movement, Mr. Tei Konzi, highlighted the continuous steps taken by the Commission to assist Member States on regional trade initiatives and the African Continental Free Trade Area (AfCFTA) negotiations, and reiterated the commitment of the ECOWAS Commission to coordinate Member States’ positions in the negotiations in line with the ECOWAS Summit decisions.

Earlier in his opening remarks, the Chair of the Ministerial Meeting and the Honourable Minister of Trade and Industry of Ghana, Mr. Alan Kyerematen, recalled the importance of the 11th ECOMOT Meeting in discussing key regional and continental trade issues, and called on Member States to adhere to the timelines given by the African Ministers of Trade (AMOT) and the African Union Summit.

The issues considered at the 11th ECOMOT Meeting included: Status of ratification of the Agreement establishing the African Continental Free Trade Area (AfCFTA), conclusion of outstanding issues related to Phase 1 of the negotiations, as well as the development of a regional AfCFTA Implementation Strategy.

The Ministers also considered the renegotiations of tariff concession of ECOWAS Member States’ at the WTO, the operationalisation of the ECOWAS Trade Information System (ECOTIS), as well as the need to review the draft ECOWAS Common Trade Policy (CTP) in light of recent developments. Other initiatives under development include the West Africa Trade and Competitiveness Observatory; the Trade Component of the ECOWAS COVID-19 response, as well the Regional Non-Tariff Barriers (NTBs) Policy and Strategy.

The Ministers endorsed the recommendations from the Competition Consultative Committee of the ECOWAS Regional Competition Authority (ERCA) for consideration by the Council of Ministers.

Bringing the virtual meeting to a close, Commissioner, Konzi, recalled the major challenges facing the ECOWAS integration agenda, namely, border closures, the multiplication of different trade regimes in the region and impediments to the free movement of people and goods.

In September 2020, the 57th Summit of ECOWAS Heads of State and Government in Niamey – Niger had instructed the ECOWAS Commission to complete with Member States, all outstanding work on Tariff Concession; Rules of Origin and Specific Commitments on Trade in Services.  The leaders called on the remaining five (5) Member States that are yet to ratify the AfCFTA Agreement to take urgent steps necessary to do so and deposit their instruments of ratification of the Agreement before the start of trading under the AfCFTA. They also called on Member States that have not yet signed or ratified the African Union Protocol on Free Movement to do so.