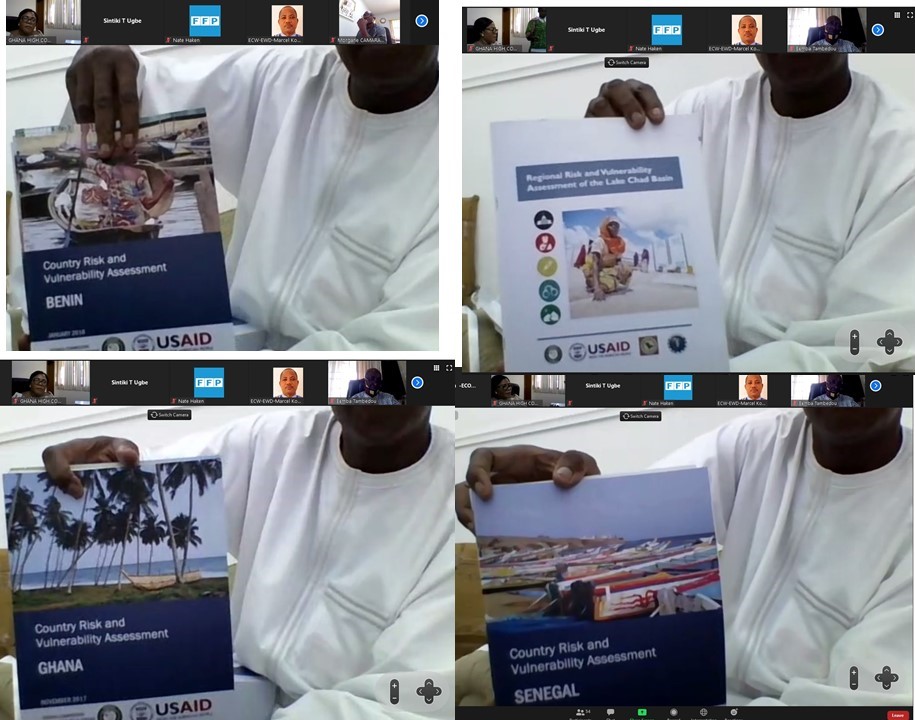 The ECOWAS Commission has launched the Joint Analysis and Response Planning Compendium and Regional and Country Risk Assessment Reports.  This event signifies the successful conclusion of the Reacting to Early Warning and Response Data project (REWARD) which commenced in 2015, with the support of the United States Agency for International Development (USAID).

The launch showcased the results of the work and dedication of the ECOWAS Early Warning Directorate and the USAID REWARD team who worked in collaboration with the ECOWAS Conflict Prevention Framework Secretariat and other directorates to develop the JARP, a compendium of frameworks and manuals that encompass a holistic and collaborative human security early warning and early response system as well as the Regional and Country Risk and Vulnerability Assessments (R/CRRVAs).

The virtual event also marked the official release of the fifteen-country risk and vulnerability assessment (CRVA) reports and the regional risk and vulnerability (RRVA) assessment reports on the Lake Chad Basin conflict system, conducted by the Directorate of Early Warning. The R/CRVA reports were validated by a technical committee of Member States experts on the 25th of August 2020.

The ECOWAS Vice President H.E Madam Finda Karoma in her opening remarks on Wednesday, September 23, 2020, which was delivered by Dr. Gueye Abdou Lat, Director of the Early Warning directorate, welcomed all the participants and emphasized the importance of the JARP tools and frameworks, which are poised to enhance the Commissions efforts in entrenching human security, from the phase of Early Warning through to the phase of multi-sectorial response planning and implementation, involving many departments of the Commission.

The tools provide an organic ECOWAS methodology for the incorporation of robust ECOWARN data into sound analysis that enhances the pertinence of Early Warning, with an accent on inter-directorate collaboration and coordination with key stakeholders, including member states, civil society organizations, and international partners.

The Gender integration and training manuals represent an innovation in mainstreaming Gender in a manner that is tailored specifically to Early Warning processes from data collection to analysis and response planning and implementation.

According to Mr Moore, the launch event formally symbolizes the official handing over of these tools to ECOWAS and the Member States for institutionalization and use and marks a turning point in the goal to promote human security and deepen democratic governance in the ECOWAS community. He added that this will enhance ECOWAS’s early warning and response systems to help reduce the risk of violence across West Africa, and promote peaceful and democratic elections in the Member States in line with the USAID West Africa and ECOWAS’ development objectives for the region. Mr Moore expressed profound appreciation to the Early Warning Directorate for anchoring and steering the USAID REWARD project.

The Director of the ECOWAS Early Warning Directorate Dr. Lat Abdou Gueye in his presentation, gave a technical insight into the tools and their components, which were carefully designed and conceptualized to boost the Early Warning and Early response capacity of the ECOWAS Commission. He further thanked sister directorates that worked tirelessly with EWD in the development of these tools. He concluded by officially launching the JARP and R/CRRVAs tools and reiterated that the tools should serve as reference materials on human security dynamics in our Member States.

Director of Political Affairs, Dr Remi Ajibewa, represented by the Head of International Cooperation, Dr. Onyinye Onwuka elucidated on the pertinence of the JARP tool which equips ECOWAS staff with an institutionalized process to internally exchange and analyze information and develop a strong foundation for ECOWAS’ interventions which increases the chances for success.

Director of Humanitarian and Social Affairs, Dr. Sintiki Ugbe in her vote of thanks on behalf of the Commission congratulated everybody who contributed in making this launch a success and thanked USAID for their important support to ECOWAS.

The High Commission of Ghana congratulated the ECOWAS Commission on the development of the valuable tools and reports, and thanked USAID for their support.  Participants at the virtual meeting were from the ECOWAS Commission, USAID, ECOWAS Ambassadors, African Union, ECCAS, IGAD, CENSAD, COMESA, SADC, EAC, WANEP, WACSOF, GIZ and the National Early Warning Centres in ECOWAS Member States.