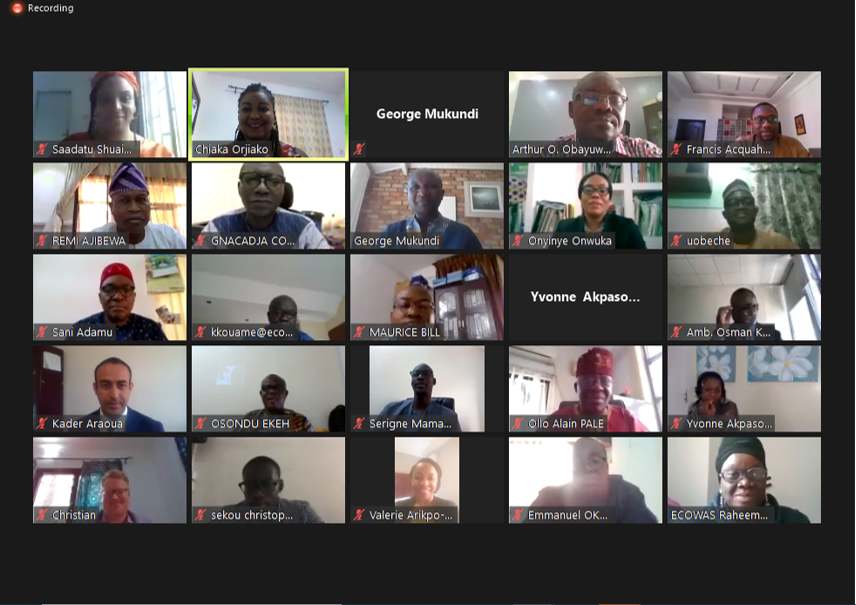 The ECOWAS Commission today held a one-day workshop on the modalities for implementing the Silencing the Guns agenda in West Africa, a flagship programme of the Africa Union’s Agenda 2063.

The workshop was organized through the ECOWAS  Directorate of Political Affairs in collaboration with the African Union Commission’s Silencing the Guns Unit.

The objective of the workshop was to further discussions on an ECOWAS strategy and approach to the regionalisation of the Silencing the Guns Agenda in West Africa and in coordination and alignment with the African Union .

In his welcome address, the Director, ECOWAS Directorate of Political Affairs, Dr. Remi Ajibewa underscored the importance of a common institutional approach including the establishment of an internal working mechanism to support coordination, steering and implementation efforts.

The Head of Division, Mediation and Coordination of Regional Political Affairs, Dr. Onyinye Onwuka, emphasised the important role accorded to the Regional Economic Communities and Regional Mechanisms (RECs/RMs) in the operationalisation of this agenda by the African Union.

The collaboration with the AU Commission thus serves an opportunity for streamlining of approaches around the Master Roadmap.

The meeting was also addressed by Ambassador Osman Keh Kamara, Special Advisor on Silencing the Guns to the African Union Commissioner for Peace and Security. Ambassador Kamara congratulated the ECOWAS Commission for the initiative taken to further work on this agenda, the mandate of which was extended by the AU Heads of State and Government until 2030.

He informed that in this context, the AU Commission would prioritise cooperation with the RECs/RMs to ensure further cascading of efforts to support member states in the development of their action plans for the Silencing the Guns Roadmap.

Opening remarks of the GIZ ECOWAS Peace and Security Architecture and Operations (EPSAO) Project were delivered on behalf of the Head of Programme by Ms. Yvonne Akpasom, Head of Conflict Prevention and Electoral Affairs. Ms. Akpasom emphasised the meeting as highly relevant to the determination of ECOWAS to increase cooperation and enhance synergy in addressing conflict at its roots and to develop robust response approaches and mechanisms in this regard.

She further conveyed the commitment of the EPSAO Project in support this process.

The Silencing the Guns workshop was supported by the GIZ EPSAO Project which is co-funded by the European Union, in collaboration with the German Federal Ministry for Economic Cooperation and Development.