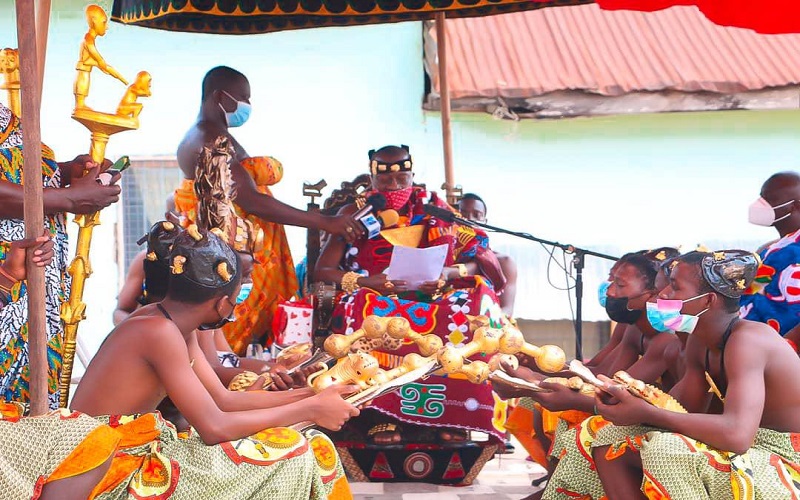 The Omanhene of the New Juaben Traditional Council, Daasebre Prof. (Emeritus) Oti Boateng has commended waste management experts, Zoomlion Ghana Limited, for the introduction of the “1Million waste Bin Project” aimed at ensuring that in every household there was a waste bin.

He welcomes the introduction of the project in his traditional area during the launching of his Root-Based Development Model (RBM) project dubbed ‘’Operation Clean Communities’’ in Koforidua.

This health driven initiative by the Omanhene is one of the six thematic development concerns of the Root-based model which is to complement government’s effort to reduce the spread of COVID-19 and the four main communicable diseases in the Traditional Area.

The initiative forms part of the Councils community development within the implementation strategy of the existing award-winning Root-based development model (RBM) developed by Daasebre Oti Boateng for Ghana, Africa and the world.

According to the Omanhene, Operation Clean Communities requires residents to look beyond themselves and take “collective responsibility”.

It focuses on sanitation and the importance of leading a generally healthy lifestyle in order to protect the community as a whole. It’s also inspired by the universal dictum that prevention is better than cure.

It will thus involve the use of trained personnel in a comprehensive health education of households within the two municipalities constituting the Traditional Area.

By this strategy, the operation is expected to break the pathway of disease transmission not only for COVID-19 but also for the four major diseases of malaria, cholera, typhoid and measles revealed as afflicting the communities in the Root-based survey conducted in 2020.

The launching also brought on board the Municipal Chief Executives of New Juaben North and New Juaben South, Hon. Comfort Asante and Hon. Isaac Appaw Gyasi who graced the occasion and also thanked the Omanhene for the laudable initiative and used the occasion to explain the various developments activities being carried out within the municipalities.

The chairperson for the occasion, Mrs. Sophia Nana Kudjorji, Chief Corporate Communications Officer of the Jospong Group, who acted in the stead of the Executive Chairman of the Jospong Group of Companies, Dr. Joseph Siaw Agyepong, was full of praise for the Omanhene and indicated the willingness and support by the Jospong Group to ensure a successful implementation of the project.

She was particularly happy the vision of the Omanhene is tired to the mission of the Jospong Group of Companies/Zoomlion Ghana Limited, which is improving the lives of people and the environment.

She advised the inhabitants to ensure keeping their environment clean in order to prevent the communicable diseases affecting their communities and see waste management as a collective responsibility.

She also urged the Eastern Regional Coordinating Council, and the Metropolitan, Municipal and District Assemblies (MMDAs) and waste contractors in the region to be part of the 1million bin campaign of ensuring every household acquiring a waste bin becomes successful.