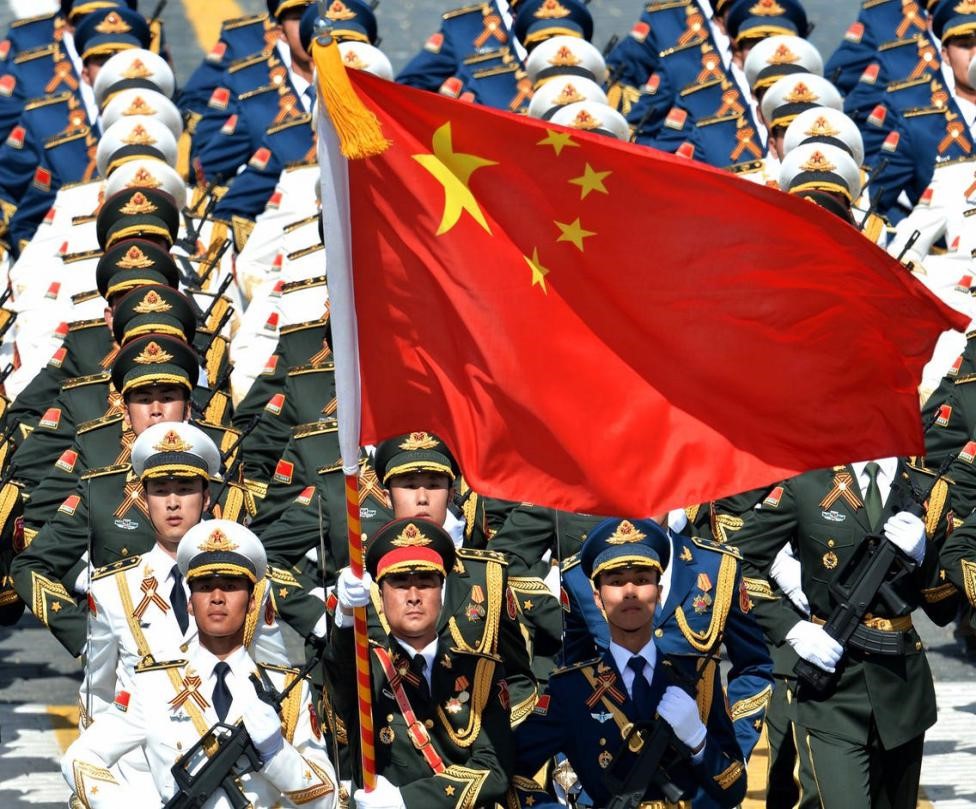 Building a community with a shared future for mankind conforms to the trends of the times for peaceful development, and reflects the common aspirations of all peoples throughout the world.

China’s armed forces have responded faithfully to the call for a community with a shared future for mankind. They are actively fulfilling the international obligations of the armed forces of a major country, comprehensively promoting international military cooperation for the new era, and striving for a better world of lasting peace and common security.

Resolutely upholding the purposes and principles of the UN Charter

As a founding member of the United Nations and a permanent member of the UNSC, China unswervingly endorses the central role of the UN in international affairs, and resolutely upholds international law and the basic norms governing international relations based on the purposes and principles of the UN Charter. It firmly maintains multilateralism, advances democracy in international relations, participates extensively in global security governance, actively engages in arms control and disarmament, and endeavors to offer Chinese proposals for resolving major issues and formulating important rules.

China has played a constructive role in the political settlement of regional hotspots such as the Korean Peninsula issue, the Iranian nuclear issue and Syrian issue. China opposes hegemony, unilateralism and double standards, promotes dialogues and consultations, and fully and earnestly implements UNSC resolutions. China has actively participated in multilateral dialogues and negotiations on cyberspace and outer space, and pushed for the formulation of widely accepted international rules that are fair and equitable.

China actively participates in international arms control, disarmament and non-proliferation. China objects to arms race and strives to protect global strategic balance and stability. To this end, China has signed or acceded to dozens of relevant multilateral treaties including the Treaty on the Non-proliferation of Nuclear Weapons. In 2015 China announced the establishment of the USD1 billion China-UN Peace and Development Fund in the following decade, which was officially put into operation in 2016.

China actively develops constructive relationships with foreign militaries. A new configuration of foreign military relations which is all-dimensional, wide-ranging and multi-tiered is taking shape. China has engaged in military exchanges with more than 150 countries and set up 130 offices of military attachés and military representatives at Chinese diplomatic missions abroad, while 116 countries have established military attaché’s offices in China. In addition, China has put in place 54 defense consultation and dialogue mechanisms with 41 countries and international organizations. Since 2012, high level Chinese military delegations have visited over 60 countries, and defense ministers and commanders-in-chief from over 100 countries have visited China.

China is strengthening military exchanges with developing countries in Africa, Latin America, the Caribbean and the South Pacific by carrying out personnel training, conducting exchanges between mid-and-junior level officers, and providing assistance in military development and defense capabilities. In Beijing in 2018 China hosted the China-Africa Defense and Security Forum, the China and Latin-America High-level Defense Forum, and the Forum for Senior Defense Officials from Caribbean and South Pacific Countries.

The PLA adheres to the principles of mutual trust, mutual benefit and win-win cooperation in carrying out pragmatic exchanges and cooperation with foreign militaries. Since 2012, China has held over 100 joint exercises and training with more than 30 countries. These engagements have covered traditional and non-traditional security fields, in locations extending from China’s periphery to the far seas, and the participating forces have expanded from land forces to multiple branches including the army, navy and air force. Cooperation and exchanges in personnel training have intensified. Since 2012, the PLA has sent over 1,700 military personnel to study in more than 50 countries. Over 20 Chinese military educational institutions have established and maintained inter-collegiate exchanges with their counterparts from more than 40 countries. Meanwhile, more than 10,000 foreign military personnel from over 130 countries have studied in Chinese military universities and colleges.

In June 2001, China, Kazakhstan, Kyrgyzstan, Russia, Tajikistan and Uzbekistan co-founded the Shanghai Cooperation Organization. The SCO has now grown into a new type of comprehensive regional cooperation organization covering the largest area and population in the world. The Shanghai Spirit featuring mutual trust, mutual benefit, equality, consultation, respect for diverse civilizations and pursuit of common development has come into being. With its commitment to building an SCO community with a shared future and developing a new model of international relations, the organization has made a new contribution to regional peace and development. In June 2017, the SCO expanded for the first time and admitted India and Pakistan as member states. In April 2018, China hosted the first SCO Defense Ministers’ Meeting since the organization expanded its membership. The member states continue to strengthen defense and security exchanges and cooperation, including Peace Mission exercises, and Fanfare for Peace military tattoos, to further promote good-neighborliness and strategic mutual trust, increase military cultural exchanges, and enhance unity and friendship.

China actively supports the institutional development of the Conference on Interaction and Confidence-Building Measures in Asia (CICA), advocates common, comprehensive, cooperative and sustainable security in Asia, and plays an important role in building an Asian security cooperation architecture.

China takes concrete actions to safeguard world peace and has actively participated in the UNPKOs. China is the second largest contributor to both peacekeeping assessment and UN membership fees, and the largest troop-contributing country (TCC) among the permanent members of the UN Security Council. Over the past 30 years, China’s armed forces have resolutely delivered on the purposes and principles of the UN Charter, and sent over 40,000 peacekeepers to 25 UN peacekeeping missions. In the missions, China’s peacekeepers have built and repaired over 17,000 kilometers of roads, cleared and disposed of over 14,000 mines and various items of unexploded ordnance, transported over 1.2 million tons of materials and equipment over a total distance of more than 13 million kilometers, provided medical services to over 246,000 sick and wounded people.

Rapid deployment of peacekeeping forces means greater opportunities to maintain peace and protect lives. China’s armed forces fully support the UN in developing the Peacekeeping Capability Readiness System (PCRS) and reinforcing UN rapid deployment capacity. In September 2017, China completed the registration of a UN peacekeeping standby force of 8,000 troops. This force has 28 units in ten categories — infantry, engineer, transport, medical, force protection, rapid response, helicopter, transport aircraft, UAV, and surface ship units. In October 2018, after a satisfactory Assessment and Advisory Visit (AAV) by a UNHQ team, 13 of these units were elevated to PCRS Level 2. In 2019 and 2020, six units were upgraded to PCRS Level 3 from Level 2. The Chinese standby force has been trained in strict compliance with the UN criteria and maintained the requisite degree of preparedness. It is now a well-trained, well-equipped and disciplined specialized force. China has become the country with the largest number of standby peacekeeping troops of the most diversified profile.

In line with relevant UNSC resolutions, since December 2008, the Chinese government has dispatched naval ships to carry out regular vessel protection operations in the Gulf of Aden and the waters off the coast of Somalia. Chinese PLAN task groups cooperate with multiple naval forces in the area to safeguard international SLOCs. In the past decade, over 100 vessels and 26,000 officers and sailors have been regularly deployed in 38 convoys, each consisting of three to four ships, in vessel protection operations. They have provided security protection for over 6,600 Chinese and foreign ships, and rescued, protected or assisted over 70 ships in distress. In June, 2018, the 28th Escort Task Group of the Chinese PLA Navy paid an official friendly visit to Ghana and held exchange activities with Ghanaian Navy, which help deepen the traditional friendship and enhance mutual political trust between the two countries.

China’s armed forces take an active part in the international efforts for HADR. Military professionals are dispatched to conduct disaster relief operations in affected countries, provide relief materials and medical aid, and strengthen international exchanges in this respect. Since 2012, China’s armed forces have participated in the search for the missing Malaysian Airliner MH370, and in the relief operations for Typhoon Haiyan in the Philippines, the Ebola epidemic in West Africa, the water scarcity in Maldives, the earthquake in Nepal, and the flood caused by a dam collapse in Laos. Since it entered service a decade ago, the PLAN’s hospital ship Ark Peace has fulfilled 7 voyages coded as Mission Harmony and visited 43 countries. During these visits, it provided medical services to the local communities, organized medical exchanges, and helped over 230,000 people.

Since the outbreak of the COVID-19 pandemic, the Chinese military has strengthened prevention and control measures and shouldered its international responsibility as the military of a major country by carrying out international cooperation against the pandemic and providing public security goods to the international community. On pandemic cooperation, the Chinese military has implemented President Xi Jinping’s statement on making China’s COVID-19 vaccine a global public good. As approved by the CMC, the PLA has provided vaccines to armies of African countries, such as the Republic of Congo, Equatorial Guinea, Tunisia, Sierra Leone, Sudan, Mauritania, Guinea and Mozambique, etc.

The author of this article is Col. Zhao Hongquan, Defence Attaché of the Chinese Embassy in Ghana.