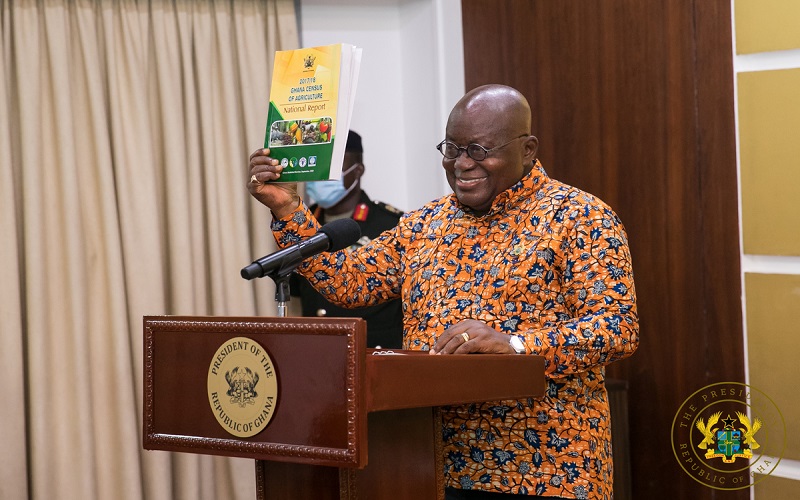 The President of the Republic, Nana Addo Dankwa Akufo-Addo, has launched the 2017/2018 National Report of the Ghana Census of Agriculture, the first time in some thirty-three (33) years.

At the event held at Jubilee House, the seat of the nation’s presidency, on Monday, 19th October 2020, President Akufo-Addo noted that the importance of agriculture to Ghana’s growth and development demands that the data on the sector, which informs the formulation of strategies and policies, as well as the monitoring and evaluation of such policies, must be accurate and up-to-date.

The President continued, “Shamefully, since then, for the last thirty-three years, no such census had been undertaken. Policy, prior to my assumption of office, had consequently been based largely on guess work. It is no wonder that this period witnessed the systematic decline of our agriculture. We cannot afford such neglect again.”

President Akufo-Addo recalled how, on Friday, 8th June 2018, at Sefwi Wiawso, as part of his working visit to the Western Region, he launched the Ghana Census of Agriculture, the first time in thirty-three (33) years that such a census was to be conducted.

The purpose of the Census is to help provide a basis to monitor the progress of Government’s interventions, offer insights on the transformation of the sector, and, more importantly, ensure the integration of the agriculture, industry and services sectors.

Agricultural activity in the country, according to the Report, remains mainly rural (75.2%) and rudimentary, with little innovation and modernisation. The use of modern tools and equipment such as tractors, shellers, power tillers, hatchery/incubator, meat processing equipment and milking equipment is negligible; tractors are the most used, yet the least owned equipment; fertilizer is not used by most holders; the use of pesticides is highly prevalent among holders; and crop cultivation is predominantly dependent on rain.

Additionally, the Report indicated that the sector remains unfriendly to special interest groups, including persons with difficulty in performing activities and women; the level of education among agricultural holders is low; and the sector, to a large extent, is characterised by consumption of its own produce;

The majority of parcels of land used for the cultivation of crops is smaller than 2 acres, with the youth, generally, finding agribusiness unattractive.

“From these results, it is clear that agriculture continues to be the anchor of the country’s economy. The data also points to the fact that production methods are not modern, and income levels of farmers and fisher-folk remain low, making the sector unattractive to the youth as a viable means of livelihood,” he said.

That is why, over the last three (3) years and ten months, through the programme for Planting for Food and jobs, the President stressed that “we have begun to change the narrative by modernising agriculture, improving production efficiency, achieving food security, and guaranteeing profitability for our farmers, all aimed at significantly increasing agricultural productivity.”

President Akufo-Addo told the gathering that Government, through the Ministry for Food and Agriculture, is pursuing a value-addition strategy, aimed at rapidly ramping up agro-processing, and developing new and stable markets for our products.

“PFJ has not only increased substantially the production of maize, rice, soybean and sorghum, and transformed our nation into a net exporter of food, but has also created some two million jobs direct and indirect jobs,” he added.