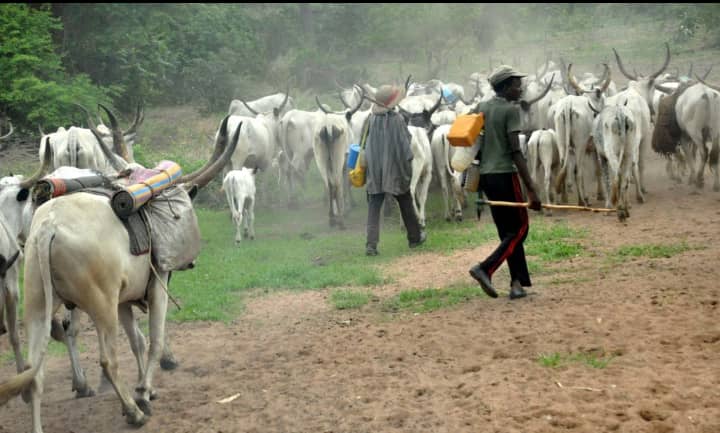 A thirteen-year-old girl has allegedly been ganged-raped by four Fulani herdsmen Gomoa Adzintem in the Gomoa East District of the Central Region.

The herdsmen are also reported to have severely butchered the girl’s father, Kwabena Quaye, with the incident said to have sparked an outrage in the community.

The incident happened on the night of Thursday, August 26, 2021.

The youth and community leaders in Gomoa Adzintem incensed about the ordeal, took to the streets of the community on Friday, August 27, 2021, to demonstrate against the act.

They have threatened to assault and kill any Fulani herdsman with is cattle in retaliation to the pains inflicted on them by the herdsmen.

According to the residents who are predominantly farmers, it is the not the first time they have suffered such an ordeal from the hands of the Fulani herdsmen.

They contend that the herdsmen have been destroying their crops and terrorizing them anytime they to prevent their livestock from grazing in their farms.

“The Fulani herdsmen have been terrorizing us. None of us have leased any land to them. The moment you cultivate your land, they bring the cattle to graze in it. Mostly, they eat all your crops and those that they don’t like, they destroy them. We are sending a warning to them, if they come here again, we will kill all of them”, one of the angry demonstrators warned.

The Chief of Gomoa Adzintem, Obrempong Essel Andoh, who confirmed the incident, lamented over the unfortunate occurrences by the Fulani herdsmen and appealed to the Inspector-General of Police, Dr. Akuffo Dampare, the Gomoa East District Assembly and its Chief Executive, as well as the Member of Parliament for the area to come to their aid.

He said the matter has been reported to the Gomoa Dominase District Police Command and expects the IGP to show keen interest in the case and ensure that the perpetrators are brought to book.

The teenage girl, he noted, has since been admitted at the hospital where she is receiving medical care.

“I am sending a message across all Gomoa land that we should wake up and not allow Fulani herdsmen to terrorize our people. The girl has given an indication that she could identify all the people who raped her. I will urge the IGP to instruct the Dominase Police Commander and his people to assemble all Fulani herdsmen in Adawukwaa, Mampong, Okyereko and Mustapha Plus, for identification parade for the girl to identify the people who raped her. If they don’t do that, the entire country will hear from us. I have not leased out any land to any Fulani. Any chief who has leased a land to these Fulani herdsmen should as a matter of urgency, restrict the people to graze on their land alone not Adzintem. Any Fulani herdsman who crosses over to Adzintem will have himself to blame”, he noted.

Kwabena Quaye commenting on the incident, said the gun-wielding herdsmen had attacked him ostensibly to rob him and his family of their hard earned money but resisted any attempt from the from the herdsmen.

“They wanted to forcefully enter my room. My daughter and I resisted them. So, an attempt by my daughter to lock the door, one of the herdsmen shot at the locker, and in the process, damaging the hand of my daughter. So, I pulled a matchet and struggled with them but was hit in the head from behind with a club. I then fell down only to hear my daughter also struggling with them. They took her to the back of my house and gang-raped her. It was our neighbors who came to our rescue after hearing the gun shot. When they arrived, the herdsmen had taken to their heels, so they took us to the hospital for treatment”, he recounted.