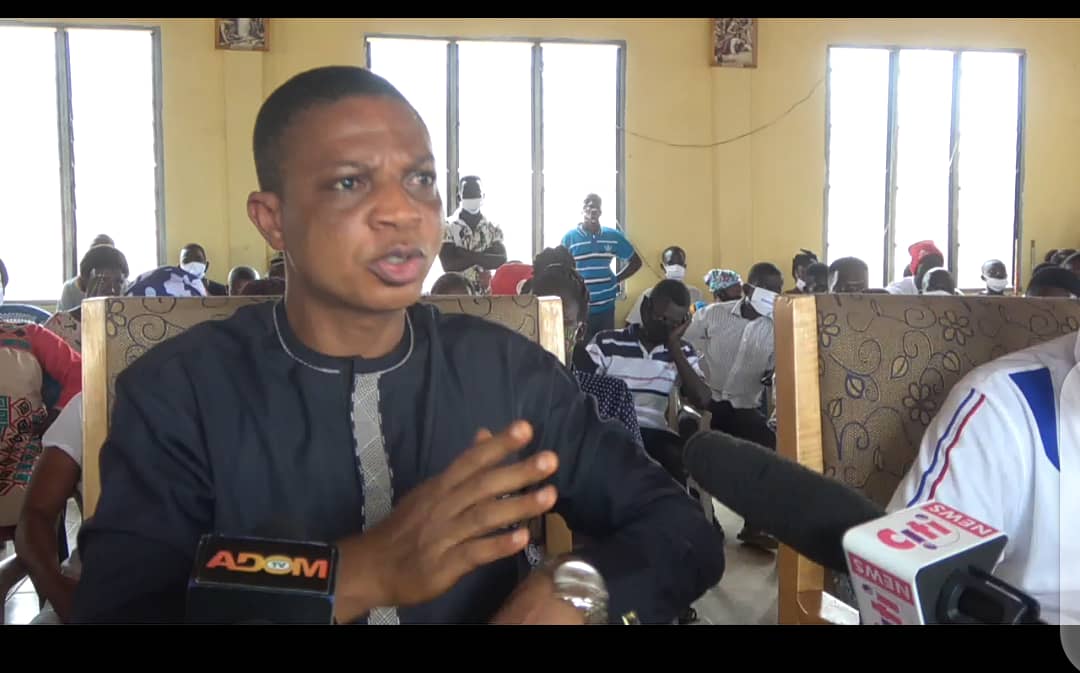 The Central Regional Branch of the New Patriotic Party (NPP), has sent a notice to the Regional Police Command, profiling a series of violent activities orchestrated by the Member of Parliament (MP) for Ajumako-Enyan-Essiam, Casiel Ato Forson, and urging them to at all times monitor his movements to forestall any future violence that may be unleashed on the people.

According the NPP, the three-time MP has since 2009, persistently been unleashing violence on the people of Ajumako-Enyan-Essiam, especially, members and sympathizers of the Danquah-Busia-Dombo tradition with the firm belief that such act is the only option to deploy in order to sustain his incumbency and also retain the seat for the National Democratic Congress (NDC).

At a press conference in Ajumako-Besease on Friday, August 7, 2020, to set the records straight on recent violent activities in the constituency during the just ended voters registration exercise, the Regional Secretary of the NPP, Richard Takyi Mensah, detailed series of vicious activities allegedly orchestrated by Mr. Forson using landguards and machomen prior to and after winning the 2008 parliamentary election of the area.

“Ajumako-Enyan-Essiam Constituency had been peaceful all this while until Ato Forson appeared on the political scene in 2008 as the NDC Parliamentary Candidate. Since then, Ajumako-Enyan-Essiam has been the breeding grounds for political violence. To take you down memory lane, Ato Forson with his NDC hoodlums attacked NPP supporters who had embarked on a peaceful keep-fit exercise on the Ajumako-Techiman road in 2008 which saw some NPP supporters sustaining various degrees of injury. Also, Ato Forson’s aide, by name frank Arnold Otchere attacked innocent people who were in a queue to take part in the 2012 Voters’ Registration Exercise. In the same 2012, Ato Forson’s marauding supporters attacked NPP supporters at a mini rally at Ajumako Assasan where an NPP supporter, by name Kwesi Bon, was stabbed on the nose”,

Furthermore, the NPP said “in October, 2016, Ato Forson and his landguards attacked NPP Constituency Officers at Mr. Okyere’s (an NPP elder) house in Besease in which attack Kojo Abaasa (a.k.a Rasta), Tuafic Alhasssan, Osei Brobbey and one Alex (Mr. Okyere’s driver) were stabbed which resulted in life threatening injuries. It the course of this attack, they vandalized the NPP Parliamentary Candidate’s Nissan Patrol vehicle and the NPP Constituency Secretary’s Taxi cab. Not only did they injure people and vandalize properties, they also stole phones and iPad from the cars that they vandalized. On the 7th of December, 2016, Ato Forson’s supporters attacked NPP supporters at Ajumako Assasan and Enyan Maim polling stations, injuring them and vandalizing vehicles belonging to the NPP supporters”.

Touching on the recent violent activities in the constituency, the NPP said the unfolding events does not surprise them when the former deputy Minister of Finance is in the helm of affairs as the MP for the area.

The party recalled a video which went viral on social media where Mr. Forson was heard loudly telling a group of young men and women he had met and was arranging to bus them to the constituency for them to be registered and requesting them to support him to retain the Ajumako-Enyan-Essiam parliamentary seat where he is likely to be appointed Minister of Finance in the unlikely situation that former President Mahama becomes the next President of the Republic to buttress their claim.

That notwithstanding, the Ajumako-Enyan-Essiam lawmaker is also heard in another video shouting on top of his voice that he does not fear anybody and therefore urged his supporters to remain resolute.

In furtherance of his alleged vicious activities, Mr. Forson was accused by the NPP for busing non-indigenes to Ajumako-Enyan-Essiam to get registered in the voters registration exercise and vote for him in the December 7 Parliamentary elections to retain the seat for himself and the NDC.

A case in point, the NPP noted, was “where a bus-load of Ato Forson’s non-indigenes who had been contracted from the Gomoa area to come and register in the Ajumako-Enyan-Essiam Constituency so that they could vote for Ato Forson and the NDC was arrested by the police at Gomoa Dominase”.

According to the NPP, despite the arrest, Mr. Forson continued to deplore other measures including the use of languards and machomen bused Kasoa and Accra and housed in different hotels with the constituency and Mankessim in Mfantseman Municipality to orchestrate his alleged diabolical agenda.

“Some of these Ato Forson Landguards were those who were arrested by the police at YAN Guest House in Mankessim during the Voters Registration Exercise. These Ato Forson Landguards/Machomen were numbering about two hundred and were always seen in Urvan/Coastal buses and pick-up vehicles moving from registration centre to another creating scenes, beating people and causing all forms of violence within the constituency”, Takyi Mensah explained.

Despite the pockets of violence recorded in the constituency and the subsequent arrest made by the Police, some registration centres in the area continued to witness chaos with the NDC Regional Executives accusing some NPP bigwigs for masterminding attacks on perceived NDC supporters at a polling station in Ajumako-Besease.

“At Nyame Bekyere, one of Ato Forson’s marauding boys who goes by the name Young Money attacked NPP supporters at the registration centre. At Ekwamase, the NPP registration agent, Jonathan Aidoo, who was challenging a non-indigene who had come to register, was attacked and slapped by the NDC hoodlums and in the course of the attack, the notorious NDC Constituency Youth Organizer, Amos Mensah, pulled a gun. On the 3rd of August, 2020, Ato Forson in the company of some of his landguards, stormed the house of one NPP activist, Miss Ernestina Baiden, in Ajumako Besease where Ato Forson went to threaten Miss Baiden and her family members just for the mere reason that Miss Baiden was raising a challenge against non-indigenes who had been bused in by Ato Forson and the NDC to register.

“We place it on record that Mr Lord Commey, Director of Operations at the Presidency, has never been in the Central Region since the 2020 voters Registration exercise started let alone to be in Ajumako on the 5th of August, 2020 to be part of any meeting to cause violence in Besease. Also, the Central Regional Chairman of the NPP, Mr Robert Kutin Jnr, was not in Ajumko Enyan Essiam constituency on Wednesday, 5th August, 2020 and therefore cannot be part of any alleged meeting in Ajumako on that day. Also, there was no meeting between the Transport Minister, Hon Kwaku Ofori Asiamah, the NPP Central Regional Secretary, Mr Richard Takyi-Mensah, the NPP Central Regional Research/Elections Officer, Mr John Mbroh, the NPP Parliamentary Candidate for Ajumako Enyan Essiam, Dr Rashid Kwesi Etuaful, and the DCE for Ajumako Enyan Essiam, Hon. Ransford Kwesi Nyarko on one side and the Mankessim Divisonal Police Commander, ACP Owoahene, on the other”, the party explained.

They added “For emphasis, the New Patriotic Party is a very law abiding party and under no circumstance will the party and its functionaries engage in any activity to endanger the peace in Ajumako Enyan Essiam. We have always been in touch and reporting to the police anytime there was an attack on any of our supporters or had issue with the security situation in the constituency throughout this voters registration exercise. We even went to the extent of reporting attacks on party people to the Regional Police Command. Some of Ato Forson’s hoodlums who have perpetrated violence against our party people in the course of the voters registration exercise and are on the police’s wanted list are Amos Mensah, Frank Okyere a.k.a Yellow Corn, Thomas Woode, Isaac Andoh, a.k.a Young Money, Godwin Doughan and Anabi Musah. The police have dockets on all these people but they have gone into hiding on the orchestration of At Forson”.

Worried about violent happenings in Ajumako-Besease, the NPP has called on the Police intensify their investigations and fish out the perpetrators of that caused that dastardly acts on Wednesday, August 5, 2020, and let them face the full rigors of the law.

Ajumako-Besease, Ato Forson is a ‘devil’; watch his ways to forestall any violence in Ajumako – NPP to Police, Casiel Ato Forson, NPP