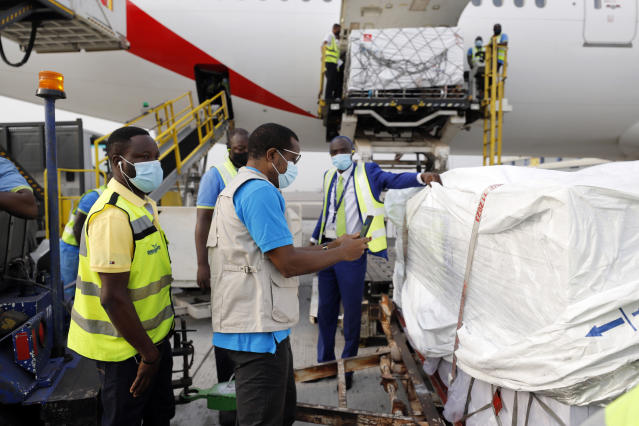 A deputy Communications Officer of the main opposition National Democratic Congress (NDC), Kwaku Boahen, has hailed the bold decision taken by the President of the Republic of Ghana, Nana Addo Dankwa Akufo-Addo, to take delivery of COVID-19 vaccines from the COVAX Facility to vaccinate the people against the deadly coronavirus.

He described the move by the President as apt, noting that “it has really helped in uplifting the confidence of the public that once we get vaccinated, we will be immune to the virus”.

However, Mr. Boahen was quick to criticize President Akufo-Addo for failing to secure enough vaccines to take care of the about 30 million Ghanaian population.

The NDC communicator made this observation on Accra-based United Television (UTV) on Thursday, May 6, 2021, when contributing to a panel discussion on the second batch delivery of AstraZeneca/Oxford vaccines, which was monitored by www.politicoghana.com.

On February 24, 2021, Ghana took delivery of 600,000 AstraZeneca/Oxford vaccines licensed to the Serum Institute of India. This was part of the first wave of vaccines headed to several low- and middle-income countries through the COVAX Facility, a global initiative formed by the World Health Organization, UNICEF and other partners to guarantee equitable access to vaccines.

UNICEF Representative in Ghana, Anne-Claire Dufa, described the occasion as “momentous, as the arrival of the COVID-19 into Ghana is critical in bringing the pandemic to an end”, adding “the only way out of this crisis is to ensure that vaccinations are available for all”.

Ghana was expected to take delivery of additional 350,000 doses of the AstraZeneca vaccine from the COVAX Facility. The expected vaccines should have been delivered on Tuesday, May 4, 2021 but flight delays led to its postponement.

Boahen commenting on expected additional AstraZeneca vaccine said the doses are enough considering the about 30million population in the country.

“Considering the fact that the 600,000 people who got vaccinated in the first exercise and are expected to take the second dose do so, what happens to the rest of the about 29,400,000 population?”

He also criticized the way and manner the 600,000 doses were distributed, a situation he noted, made it very difficult for the general public to have access to the vaccines.

According to him, if the vaccination exercise had been decentralized, it would have afforded many ordinary Ghanaians to have easy access to the doses.

However, his fears were allayed by the Ashanti Regional Secretary of the governing New Patriotic Party (NPP), Sam Pyne who was a panel member on the show.

Mr. Sam Pyne in sharp rebuttal said the President is committed to vaccinating the entire Ghanaian population but this will be done in batches considering the limited quantities of the vaccines available on the world market as well as the challenges also confronting the manufacturing countries.

On the issue of lack of access to the vaccines by a cross section of the public as alleged by NDC communicator, Mr. Pyne said prior to the vaccination exercise, the Ministry of Health had announced the category of persons that were to be vaccinated as well as the names of the centres that the exercise were to be carried out.