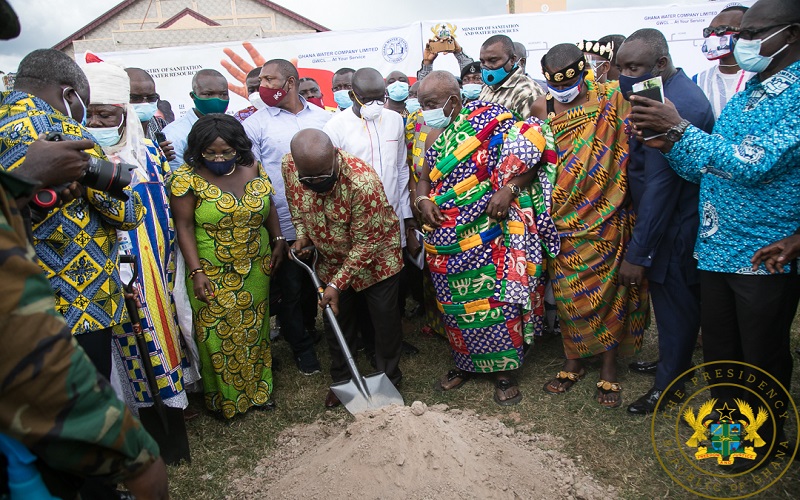 The President of the Republic, Nana Addo Dankwa Akufo-Addo, has cut the sod for the commencement of construction of the Wenchi Water Supply Project, at a ceremony at the Jubilee Park in Wenchi.

Cutting the sod on Friday, 11th September 2020, on day 2 of 2-day working visit to the Bono Region, President Akufo-Addo noted that Wenchi means a lot to adherents of the Danquah-Dombo-Busia political tradition, as it is the home of Dr. K.A. Busia, Prime Minister of the Progress Party Government of the 2nd Republic.

The existing Water Supply System is based on ground water obtained from mechanised boreholes, and supplies water only to the Wenchi Municipality. An assessment carried out by the Ghana Water Co. Ltd. indicated the poor state of the existing system, and the recommendation was for a new Water Supply System, which will abstract water from fresh water sources, ensure continuity of water supply, and meet the ever-increasing demand for water in the catchment area.

“So, you can understand my delight that, again, it is an NPP Government that has come into office to start the construction of a new water supply system for Wenchi. This project is consistent with the 2016 NPP Manifesto pledge providing “Water for All”, a key priority we are committed to implementing,” the President added.

To execute this project, the Akufo-Addo Government has secured a thirty million-euro (€30 million) credit facility from Belfius Bank of Belgium, with the support of the Belgian Export Credit Agency, Credendo.

After its completion, in thirty-six (36) months, the total supply capacity will be ten thousand, seven hundred (10,700) cubic meters per day, which will be adequate to meet the year 2040 water demand for an estimated population of some ninety-two thousand five hundred (92,500) people in towns such as Wenchi, Droboso, Yoyoano, Beposo, Asuano, Koase, Nkonsia, Wurompo and Awisa.

These communities, the President explained, will have their water supply improved in quality, quantity and reliability.

“The prevalence of water-borne diseases, such as guinea worm, cholera and dysentery, will be reduced to the barest minimum, if not eliminated. Additionally, this project will bring in its wake job opportunities, as the Contractor will engage the services of indigenes during the construction period,” the President said.

He was also expectant that, once the water supply project is completed, investors will take advantage of Government’s Flagship Programmes such as “One- District, One-Factory” to establish small and medium scale factories to exploit the natural resources of the area, create employment opportunities for the youth of the community, and stimulate the growth and development of the local economy.

Government, the President assured, will not relent in its efforts to increase access to water for all.

The President continued, “Nananom, I am excited to be here once again, and, by the grace of God, and with four (4) more years for Nana and NPP, I will be here again, in thirty-six (36) months’ time, to commission the Wenchi Water Supply Project.”