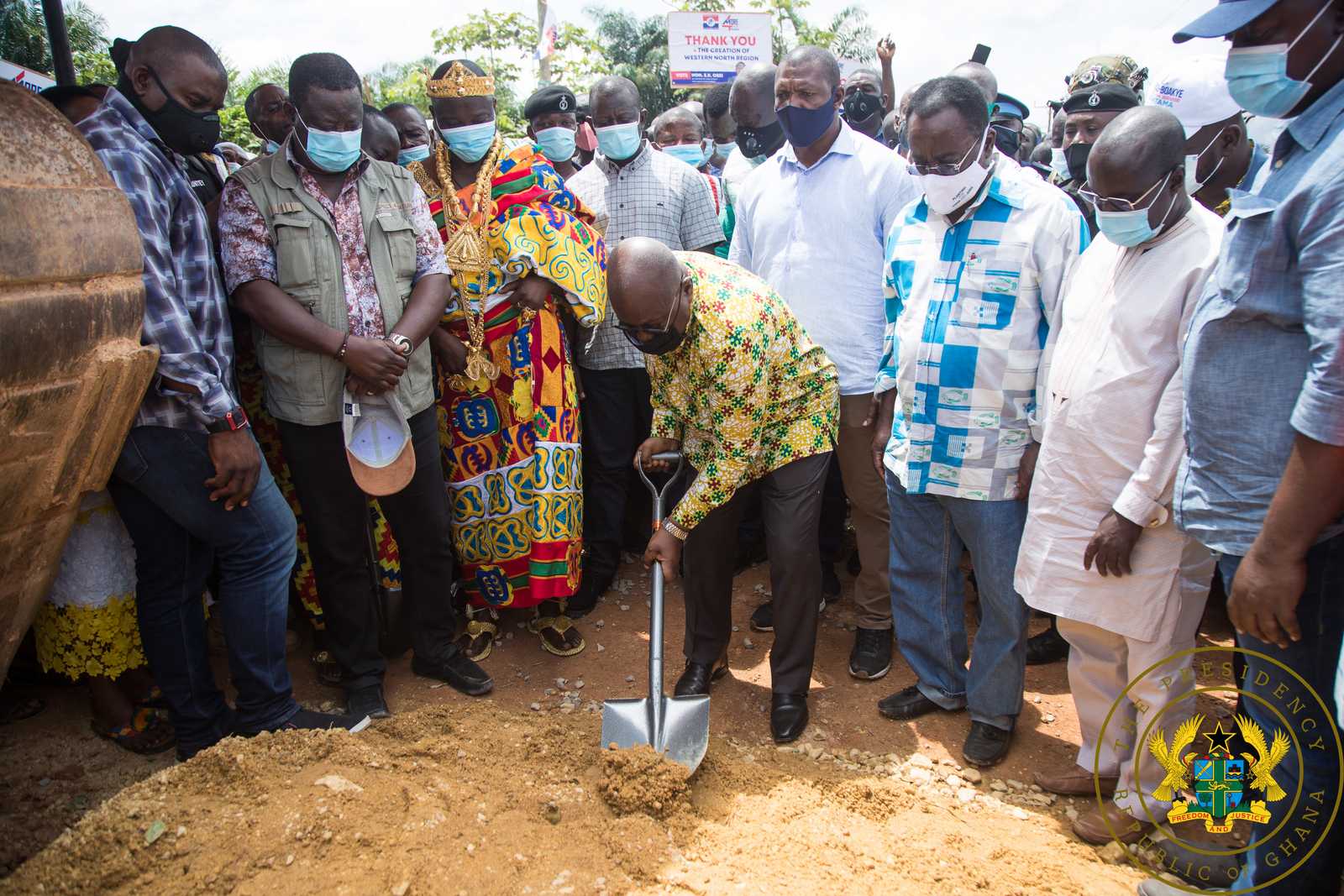 The President of the Republic, Nana Addo Dankwa Akufo-Addo, on Friday, September 25, 2020, cut the sod for the commencement of construction of the 71.25-kilometre Enchi-Elubo Road, which is being funded by COCOBOD.

The road, which is being constructed by Chinese company, Top International Engineering Corporation (TIEC), according to President Akufo-Addo, is further testimony to Government’s commitment to prosecuting the ‘Year of Roads’ agenda.

Several failed attempts have been made to reconstruct the road in the past, the latest being the two-phased contracts that were awarded between the first thirty-seven kilometres, but had to be terminated due to the non-performance of the Contractor.

Indeed, the Chiefs and residents along the major communities such as Kromokrom, Kwawu, Omanpe, Nkwanta Nos. 1&2, Jema, Boinso, Ngakain and Asemkrom are bearing the brunt of the deplorable road, and have resorted to protests to register their frustrations on numerous occasions.

As a result, the entire 71.25km has, thus, been reengineered and repackaged into this contract, which, when completed, is expected to improve the economic life of the people by enhancing the free movement of goods and people, reduce travel time and vehicle operating cost.

The President was particularly excited about the 71.25km road, which is the starting link of the N12 road, as it serves as a major conduit in the transportation of various crops, cocoa and timber produced in the northern and middle sections of the region to the Takoradi port and other parts of the country.

The Minister for Roads and Highways, Hon. Kwasi Amoako Atta, in his remarks, indicated that the road will be completed in forty-two (42) months, adding that “President Akufo-Addo himself, God willing, will come here himself to commission this road”, which he said will serve some thirty (30) town along the stretch.

President Akufo-Addo also inspected the Dadieso town roads project, which is located in the Suaman District of the Western North region, and awarded as part of Cocoa Roads improvement project.

The roads, which are part of this project, include the upgrading of Juaboso to Dadieso feeder Road (km16.4-18.40), Kaleo to Dadieso Feeder Roads (2.8Km), and Dadieso Town Roads (5.8km).

For the Dadieso Town Roads (5.8km), the scope of work under the contact include formation of the 5.8km stretch of the road, construction of 6000m of concrete 600mm x 600mmx 150mm u-drains, raising of low-lying section along the stretch, installation of culverts at water crossing points, providing and laying of 150mm subbase and base, prime seal and sealing of the 5.8km stretch, and “provision of road furniture along the 5.8km stretch.”