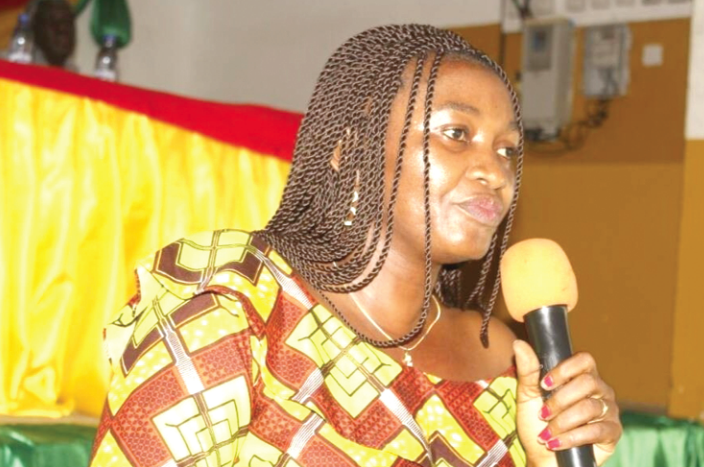 It appears the Municipal Chief Executive (MCE) for Agona West, Justina Marigold Assan, is nurturing some political ambitions, hence, has some personal interest in promoting herself in the Municipality more than her appointing authority, President Nana Addo Dankwa Akufo-Addo.

In an about six-minutes video dubbed “Progressive Achievements of NPP in Agona West under Justina Marigold Assan”, the MCE is seen promoting her personal achievements in the Municipality without even acknowledging the President let alone the efforts of the party faithfuls and the Assembly for all the efforts in uplifting the standard of living of the people of Agona West throughout the entire video.

The least said about the Member of Parliament (MP) for the area who is also the Minister for Gender, Children and Social Protection, Cynthia Mamle Morrison, for her supportive role in the Municipality the better. One begins to wonder whose interest she’s there for?

Party members as well as some sympathizers of the elephant family who are familiar with the self-acclaimed heroine nature of the MCE say the situation can have dire repercussion on the fortunes of the governing New Patriotic Party (NPP) and demands immediate attention.

A member of the NPP in Agona West constituency, who wants to remain anonymous said “Aunty Justina is behaving like she is the President. You can be the President’s representative in the Municipality but you can’t be like him.

When it comes to elections, it is the President and the MP whose pictures will be seen on the ballot yet Aunty Justy is not promoting either of them, why? Has she so soon forgotten that it was the President who appointed her?

The MP and all the constituency executives of the party are promoting the President but their efforts are being eroded on daily basis by Justina’s constant counter attacks and self- accolades as if it’s her pocket money she’s running the municipality with.

She has to change her ways else her attitude will cost the NPP party’s seat and presidential votes in the 2020 elections”.

As if her consistent failure to acknowledge the President is not enough, party faithfuls suspect strongly that the MCE is also fighting the sitting MP over something, including who should be credited for government sponsored projects that are impacting positively in the lives of the people.

Inside sources say Justina is strongly competing with the MP through a proxy over who should represent the NPP in the 2020 Parliamentary polls.

The MCE, we gather, is constantly discrediting the sitting MP as far as the construction of projects in the municipality are concerned.

Reports are rife that anytime the MP makes attempt to showcase projects H.E the President has made so far since becoming the lawmaker of the area, the MCE will quickly release documents, pictures and videos on social media to discredit her and goes ahead to portray to the public that she rather lobbied for those projects almost as if she’s an independent candidate.

She is further reported to have consciously taken a decision to frustrate payment of contracts that will enhance the popularity of the sitting MP, Hon. Morrison.

This stance of the MCE, we are told, has resulted in the halting of some projects lobbied by the MP to the area for lack of payment for over two years now.

Those familiar with the situation say the contractors affected by this action have resorted to initiating court action against the Assembly.

An example is a contractor working on a new Police Station for the people of Agona Nyarkrom who is said to have complained bitterly to the MP and some party stalwarts in the municipality about the attitude and posture of the MCE anytime he goes to the Assembly to follow up on some certificates he has raised in connection to the project he is executing on behalf of the Assembly.

The said project, we gather was abandoned for almost a year until Madam Mamle Morrison raised some money for the contractor to continue to its current stage.

What is more worrying, according to some party followers, is the display of some arrogance and show of power by the MCE.

A sympathizer of the NPP who gave his name as Kweku said he is a witness to the show of arrogance displayed by the MCE on May Day when the MP invited her to inspect some ongoing projects including the new Police Station for the people of Agona Nyarkrom.

The MCE refused to come down from her car despite several advice by the constituency financial secretary, Kweku narrates how she openly snubbed her and drove off in anger glaringly.

Sources say Justina’s leadership style is very suspicious of a presidential hopeful or an MP; a situation that is seriously causing deep cracks in the Assembly’s collective developmental drive.

Some party activists who have been following happenings in the municipality with keen interest have called on the President, Nana Addo Dankwa Akufo-Addo to intervene.

They claim the situation is not peculiar to Agona West alone as some MCEs elsewhere have arrogated to themselves some powers which they are abusing them much to the detriment of the party.