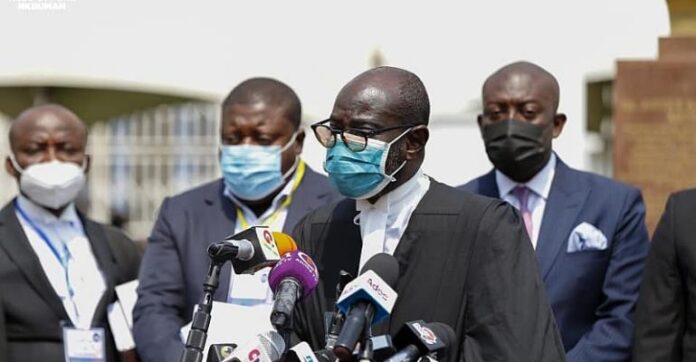 The Supreme court has advised a member of President Akufo-Addo’s legal team, in the ongoing election petition case, Frank Davies to stay off Press conferences after court proceedings.

According to the apex court, the move offends the principles of the bar, where a Lawyer actively engaged in a case in court to address the Press in his full regalia.

Chief Justice, Anin Yeboah rather asked that such responsibility be left for other officials who are not directly involved with the case to handle.

At the last sitting, Counsel for 1st Respondent took Mr. Asiedu Nketia through several questions, where on specific matters he stated he could not speak for the petitioner, while he persistently avoided questions relating to the strongroom saying he could not speak to matters that happened in the strong room because he was not there.

Also, the Counsel for 2nd Respondent started cross-examination by asking the witness whether he himself, the Petitioner, and other officials of the NDC granted interviews prior to the declaration of the 2020 elections and this was admitted.

On whether he had claimed in the press conference that the Petitioner had won the election by a certain margin, he stated he could not recollect which prompted the Counsel to seek leave to play the videos of the Press Conferences to him.

The Court enquired on the relevance of playing the videos and the Counsel informed the Court that it went to the credibility of the witness.

The Court consequently adjourned to Monday, 1st February, 2021 to play the video and assess its admissibility based on relevance.

Earlier at the last sitting, seven out of the 42 paragraphed witness statement by Johnson Asiedu Nketia in support of the petition by former President John Mahama were struck out by the Supreme Court.

The apex court took the action after a protest by lawyers of the 2nd respondent in the case – President Akufo-Addo.

The lawyers raised concerns with 10 of the paragraphs but after banter with the petitioner’s lawyer, the court settled on seven.

Meanwhile, Mr. Asiedu Nketia claimed that the petitioner was in court to challenge some actions and inactions of the Electoral Commission but not to seek the declaration of another outcome of the polls.

“My Lord we are not in court to try to declare another presidential result by us [NDC], we are in court to challenge the performance of the constitutional duty of the first respondent [Chairpersonf of the Electoral Commission] and to assess whether that duty has been discharged faithfully,” he said.