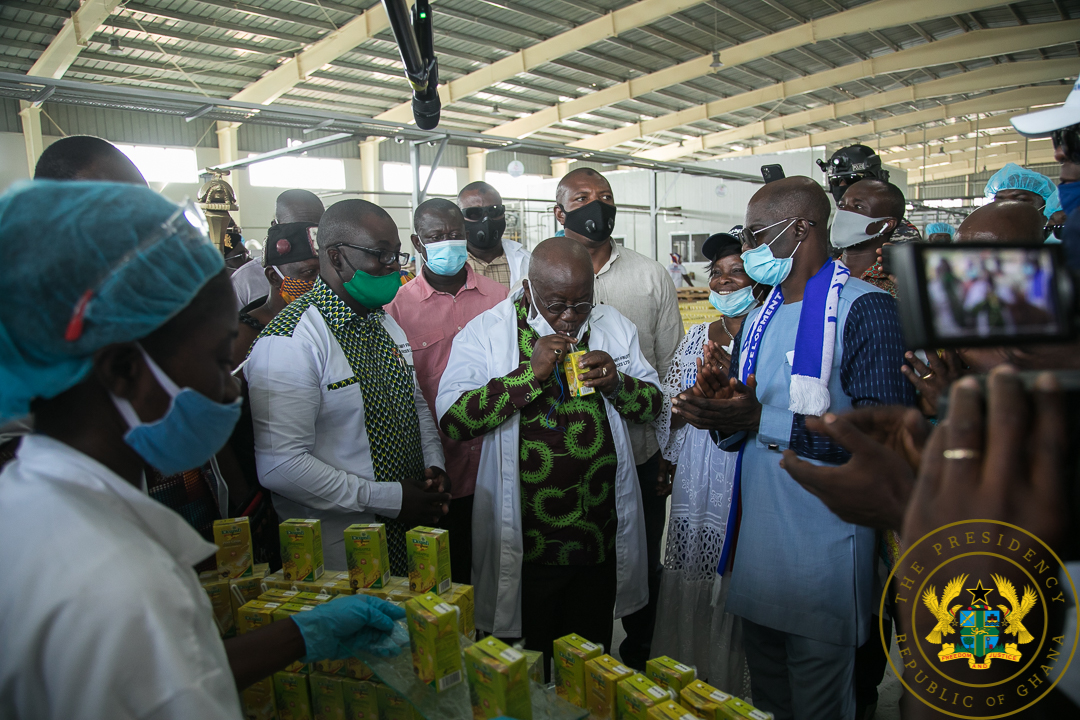 The President of the Republic, Nana Addo Dankwa Akufo-Addo, on Friday, August 21, 2020, commissioned the Ekumfi Fruits and Juices Factory, a project initiated under the One-District-One-Factory initiative of his Government.

According to President Akufo-Addo, the Ekumfi Fruits and Juices Factory is a wholly-owned Ghanaian company, and has one of the most modern, automated agro-processing plants in the country.

“A total investment of fifteen million dollars, ($15 million), of which ten million dollars ($10 million) was a facility from Ghana Exim Bank, has been made. Presently, the production capacity of the factory is ten (10) tonnes of processed juice per hour, utilizing some ten thousand (10,000) fruits per hour. This means that this factory requires four (4) acres of pineapple fruits to be harvested for processing every hour,” he added.

Commissioning the factory, the President recounted how, on 21st August 2017, some seven (7) months after taking office, he cut the sod for the construction of the the Ekumfi Fruits and Juices Factory, the first 1-District-1-Factory project of his Government.

He stated that “In my remarks, I appealed for the unalloyed support of every Ghanaian for the success of this project. Unfortunately, our political opponents did not heed this call, with some going as far as calling this project a hoax and a political gimmick, and with some describing it as ‘a grasscutter breeding house’.

The President continued, “Nearly, three years down the line, we have confounded the doubting Thomases, and I am very happy to be back here in Ekumfi, and, indeed, very proud to commission the Ekumfi Fruit and Juices Factory. As we can all see, this project has been well-planned and well-thought through, with the raw materials needed for the successful implementation of this project already present, and an outgrower scheme in place”.

Explaining the rationale for the 1D1F initiative, President Akufo-Addo noted that the initiative is designed to transform the industrial landscape of the country, and build the capacities of local entrepreneurs and existing enterprises to produce high quality products and services for both domestic and foreign markets.

Further, it seeks to create employment particularly, for the youth, in rural and peri-urban communities, and thereby improve income levels and standard of living, as well as reduce rural-urban migration.

“That is why Ekumfi, which is one of the richest districts in the country in terms of natural resources, has validated the Government’s approach to industrialization, through value addition,” he added.

With 1,000 acres of pineapple under cultivation, employing about 475 outgrowers, the factory has created direct employment opportunities for over five hundred and fifty (550) people including engineers, food scientists, marketing professionals, accountants, and technicians. In addition, more than one thousand (1,000) indirect job opportunities in Ekumfi and other adjoining districts have been created.

“The Ekumfi Fruits and Juices Factory is yet another example of Government’s determination to promote the industrial transformation of our country. Government will continue to partner the private sector to establish similar modern factories, and which would be globally competitive, and take advantage of the African Continental Free Trade Area, that will begin trading on 1st January next year,” he said.

Commending the Promoters of Ekumfi Fruits Juice Factory for putting up an excellent, modern processing facility in Ekumfi Nanaben in support of the Industrial Transformation Agenda of the Government, President Akufo-Addo also commended the Chiefs and Traditional Authorities for the release of land for the project, and urged all the farmers and workers to be disciplined, and eschew any negative tendencies that may undermine the success of this great project.