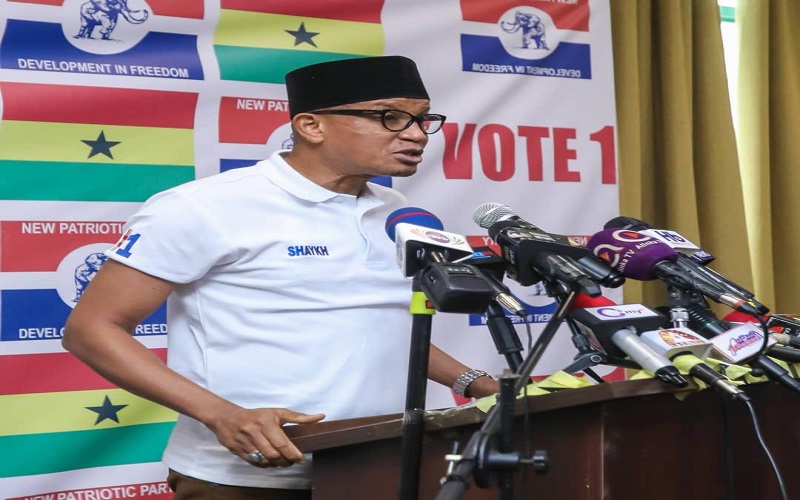 The deputy campaign manager of the governing New Patriotic Party (NPP), Dr. Mustapha Hamid, has stated emphatically that the party is winning the December 7th elections hands down.

He said the opposition National Democratic Congress (NDC) is aware of the fact that it is losing miserably, but only wants to resort to lies and mudslinging to discredit the whole electoral process.

“We are ready. We are ready for December 7. We are winning but we must win,” Dr. Hamid told journalists at a press conference on Monday, November 30, 2020.

He added: “I call on all NPP people around the country to stay focused on our message. We have done a lot. We continue to make the point that no government in the fourth republic, in its first term, has done the volume of work that the NPP has done. The Ghanaian people know. They will show it on December 7.”

He added: “The NDC know this. They go around the country too. They hear the people. Indeed, there is a video in circulation of the Presidential candidate of the NDC when he visited the Western-North region. At a rally he asked the people in Twi, “have your lives progressed or retrogressed?” Of course, he was expecting that the people will say that their lives had retrogressed. To his utter shock and dismay, the people shouted in unison, “EKO NE NIM.” To wit, our lives have progressed. And why not? Those areas are farming areas.

Dr. Hamid said the presidential candidate of the National Democratic Congress (NDC), John Mahama, has now become a butt of jokes after claiming ownership of most of NPP’s policies.

Mahama recently said that he was the originator of the Free SHS programme, which is highly touted as a flagship policy of President Nana Akufo-Addo.

According to him, Mahama is now resorting to politics of lies and insults in the run-up to the 7 December polls.

He added: “They have therefore decided that they will resort to the politics of calumny, vilification and mudslinging as a last ditch attempt at reviving their dead campaign. NDC campaign no, ator nsuom. NDC campaign, egblen. NDC campaign, yamutu. NDC nim campaign maa, kpiya. So, they have started throwing in doctored videos, manufactured and concocted documents, all in an attempt to cast NPP actors in bad light and hope that it will attract some revulsion for the NPP and hopefully revive their campaign. But no amount of fake news, concoctions, distortions and lies and vilification will revive a dead campaign. Dead campaigns are revived by coherent strategy, anchored on a sound message.  Nothing else will work. So, we are putting the public on notice that they should watch out for these fake stories in the last week of campaigning. Let us treat them with the contempt that they deserve.

“I want to conclude by asserting without fear of contradiction, that the NPP is the only party in the fourth republic that has initiated and executed programmes that have benefitted the mass of the people. Indeed, we are the only and true pro-people party. Many of the things and programmes that are benefitting millions of Ghanains were opposed by the NDC. When we found oil, they called ridiculed it and called it adwengu. When we introduced the NHIS bill in parliament they wanted none of it. They walked out of parliament. When we sought to introduce free SHS they pooh-poohed it and said it was not possible. I can recount all the serious programmes that have transformed lives in Ghana- free maternal care, NPP; capitation grant, NPP; school feeding, NPP; metro mass transit, NPP; NHIS, NPP; one district, one factory, NPP; planting for food and jobs, NPP; one village, one dam, NPP; free SHS/TVET, NPP; Zongo Development Fund, NPP; one ambulance, one constituency, NPP; one district, one warehouse, NPP.”

“So, anytime the NDC come into office, what do they do? Nothing. It is all about create, loot and share. The bankruptcy of ideas on the part of the NDC is even more telling in this election cycle. Go onto the streets and ask people what they remember about the NDC manifesto. They will tell you two things- Okada and mortuaries for Muslim communities. Subhanallah! Ladies and gentlemen, lets us move Ghana forward. Let us protect our progress. Let us come out in our numbers on December 7, 2020 and give Akufo-Addo a resounding victory that will teach politicians that Ghanaians will only accept governments that work to further the interests of the citizens, not those who come to power for the sake of it and who invest in Guinea Fowl Authorities which fly to Burkina Fasso.

“Four More To Do More for You! Number One on the ballot! God bless our homeland Ghana, and make her great and strong.”