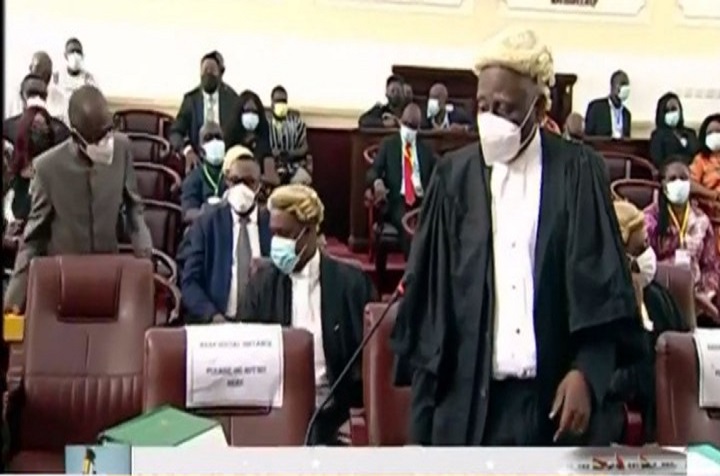 A request by John Dramani Mahama (Petitioner) inviting the Supreme to order the First Respondent in the 2020 Election Petition case (Chairperson of the Electoral Commission (EC) and Returning Officer of the 2020 Presidential Election) to enter the witness box to be cross examined, has been turned down by the apex court.

Counsel for John Dramani Mahama (Petitioner), Lawyer Tsatsu Tsikata, had told the Supreme Court moments after their third witness, Rojo Mettle-Nunoo, had been cross examined by the First and Second Respondents, that it had closed its case.

Counsel for the First Respondent (EC), Lawyer Justine Amenuvor, having examined the facts adduced from the Petitioner’s witnesses told the Court that they have also closed their case and therefore, will no longer bring in any witness to testify.

Counsel for Second Respondent (President Akufo-Addo), Lawyer Akoto Ampaw, also told the apex court that they have closed their case and will not invite any witness to adduce evidence in the ongoing case.

However, Lawyer Tsatsu Tsikata objected to the stance of the First Respondent and invited the Supreme Court to compel the Returning Officer of the 2020 Presidential Election to mount the witness box citing several cases to buttress his argument.

Of particular importance in his line of argument was the fact that the Chairperson of the Electoral Commission and Returning Officer in the 2020 Presidential Election, Jean Mensa, had elected to adduce evidence in her witness statement and therefore it was important for her to enter the witness box.

Further to that, because of some of the averments in her affidavits, it was important that she was cross examined.

Furthermore, Mr. Tsatsu averred that since Jean Mensa is holding a public office and therefore, is accountable for her stewardship, she must be compelled to enter the witness box and tell Ghanaians how she arrived at the figures that made her declare Nana Addo Dankwa Akufo-Addo President-elect in the 2020 Presidential Election.

The apex court having listened to the arguments advanced by the parties set Thursday, February 11, 2021, for its ruling on whether or not to allow Jean Mensa to enter the witness box and be cross examined.

At a sitting on Thursday, February 11, 2021, the Supreme declined the request inviting it to compel Jean Mensa to enter the witness box to be cross examined.

Reading the apex court’s ruling, Justice Kwesi Anin Yeboah JSC, said “the law is therefore settled that a party will not be compelled to enter the witness box and justify in support of his or her case”, citing the Society of Law’s case and several others to buttress their position.

“The Society of Law’s case like this Petition also deals with witnesses who have served witness statements and have decided not to give evidence to be cross examined. We are minded to state that our jurisdiction invoked in this Election Petition is a limited jurisdiction clearly circumscribed by law. We do not intend to extend our mandate beyond what the law requires of us in such petitions in Article 64 (1) challenging the validity of the President. Simply put, we are not convince and will not yield to the invitation being extended to us by the Counsel for the Petitioner to order the First Respondent to enter the witness box to be cross examined”, he noted.

He added “Accordingly, we hereby overrule the objection raised by the Counsel for the Petitioner against the decision of the Respondent declining to adduce evidence in this Petition”.