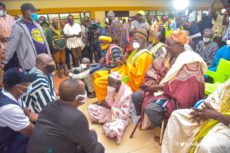 The Vice President, Dr. Mahamudu Bawumia has described as divisive comments by former President Mahama describing President Akufo-Addo and his fellow tribesmen in government as “Akyem Sakawa Boys”. Mahama endorsed a disparaging and tribal-laced article by repeating the article on his official facebook and highlighting the disparaging portion. The former President has since come under […]