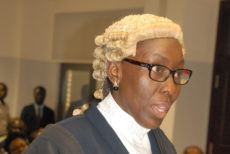 A former Minister of Justice and Attorney-General, Marietta Brew Appiah-Oppong, says aircraft manufacturer, Airbus SE, paid no bribes to some senior government officials in the acquisition of c-295 military aircrafts during the Mills-Mahama regime. Airbus SE has admitted in a UK court that it paid bribes to officials in some five countries including Ghana between 2009 […]