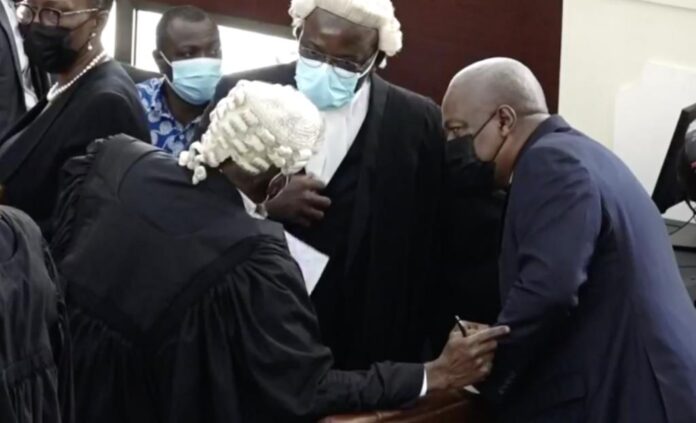 The Supreme Court has dismissed a motion moved by lawyers of the 2020 Presidential Candidate of the National Democratic Congress (NDC), John Dramani Mahama, praying to the court to permit him file “an additional ground review” to the review application on the interrogatories.

The Leader of the NDC and his lawyers were also praying to the court to allow them replace paragraph 28 of their original statement of case.

Lead Counsel for the Petitioner, Lawyer Tsatsu Tsikata, who moved the motion cited several authorities to buttress their proposal and urged the apex court to allow them file their request since it will assist the court to make a proper determination of the review pending.

Lawyers for the Respondents (Electoral Commission (EC) of Ghana and President Akufo-Addo) all opposed to the motion.

While the lawyer for the EC, Justin Amenuvor, opposed on point of law, lawyers for the 2nd Respondent (President Akufo-Addo), Akoto Ampaw, argued their case out.

The enhanced review panel made up of nine Supreme Court Judges, chaired by Justice Kwasi Anin Yeboah, in its short ruling said, the application was premised to invoke the inherent jurisdiction of the lead court.

The court said, the jurisdiction of the court cannot be invoked in the manner that the applicant was asking the court to do.

The application was subsequently dismissed.

Justice Amadu Tanko and Justice Henrieta Mensah-Bonsu were the new judges added to the enhanced panel.