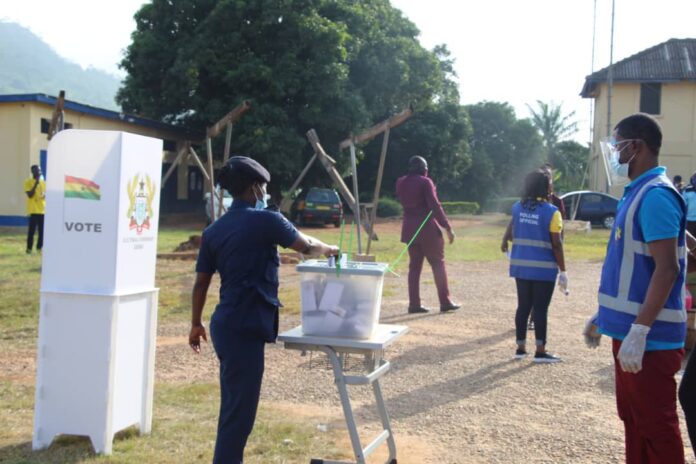 The Special voting exercise is underway in Eastern Region with a total of 7,893 eligible voters expected to take part in the exercise across 33 constituencies in the Eastern Region.

Voting started exactly 7:00 am at Police Canteen Polling station at the Koforidua Police training school, where the first voter arrived about 4:30 am.

Covid-19 protocols are strictly being adhered to. The queues have been marked for spacing while regular hand washing and sanitizing of hands of voters being practiced.

However, some security personnel could not vote as their names were not captured in the register.

As at 8:00 am, 12 voters had been turned away for not having their names on the list.

The Eastern Regional Minister Eric Kwakye Darfuor who was at the Regional Police Training School to observe the process was satisfied with the exercise.

Mensah Joseph Tawiah -New Juaben South Chairman of NDC, and Salas Agyekum -New Juaben South Constituency vice chairman of the NPP expressed their satisfaction so far about the exercise however urged the Electoral Commission and the Police administration to ensure that voters who couldn’t find their names in the register are given opportunity to vote.

Meanwhile, in the Ashaiman constituency, some police personnel from the Tema Regional Police Command faced a similar situation as they were denied the opportunity to vote.

They were turned away because their names were not found on the electoral roll.