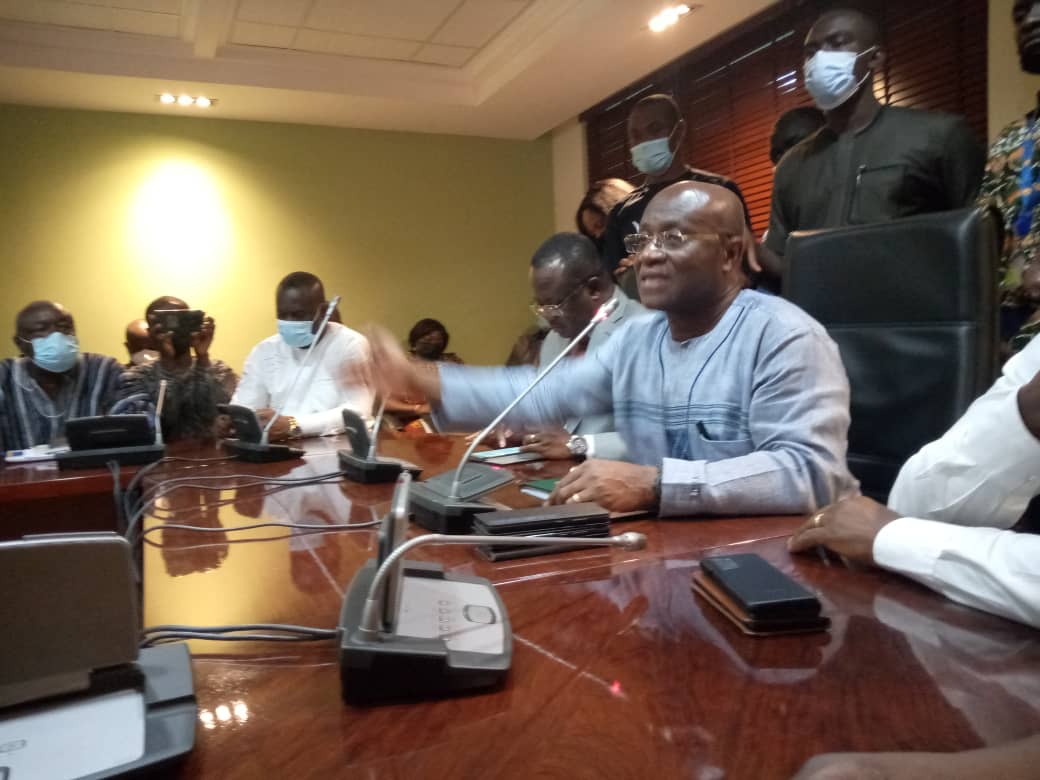 The ruling by the Speaker of Parliament, Rt. Hon. Alban Sumana Kingsford Bagbin, rejecting the motion for the approval of the 2022 Budget Statement and Economic Policy of the government has been described by the Majority Caucus as unconstitutional, illegal and void.

Same, they said, has no binding effect or whatsoever on the House, a pronouncement which has the tendency of provoking legal arguments on the floor of the House on Tuesday, November 30, 2021, as the group prepares to challenge the ruling of the Speaker.

Friday, November 27, 2021, recorded one of the most tensed sittings of Parliament, as the Speaker, despite the absence of the Majority Caucus on the floor, called for a vote on the motion for the approval of the 2022 Budget Statement and Economic Policy of the government which was moved on Wednesday, November 17, 2021, by the Minister of Finance, Ken Ofori Atta.

The Majority Caucus had staged a walkout in the House, an action they said was provoked by open bias of the Speaker, Rt. Hon. Alban Sumana Kingsford Bagbin.

Prior to concluding the debate on the motion for the approval of the budget, the Majority Leader, Osei Kyei-Mensah-Bonsu, had pleaded with the Speaker to indulge Ken Ofori-Atta as he had some pleadings to make before rounding up the debate.

But the Speaker said it was too late to make such pleadings.

Nevertheless, he puts the request before Members to decide with the Minority Caucus led by Haruna Iddrisu declining to grant the Finance Minister leave to make his pleadings.

Members from the Minority Caucus had throughout their submissions, during the debate over the budget, called on the Finance Minister to make some amendments to the 2022 Budget Statement.

It therefore came to many as a surprise the double standards of the Minority Caucus.

The Majority Caucus on the other hand, had agreed to that request but both sides failing to reach a consensus spurred the Speaker to call a voice vote on the Finance Minister’s request.

The Minority Caucus who had been able to mobilize all their members into action won the voice vote when the Speaker put the question for those in favour of the pleadings of Finance Minister to say Ayes and those not in favour to say Noey.

Not ready to succumb to the dictates of the Minority Caucus considering their double standards, the deputy Majority Leader, Alexander Afenyo-Markin called for Division.

The Speaker, having read out loud the dictates of Order 104 of the Standing Orders, directed all strangers, including the Finance Minister, to walk out of the Chamber or be thrown out by the Marshall.

With the Marshall’s office ensuring clearance, there came in the General Secretary of the opposition National Democratic Congress (NDC), Johnson Asiedu Nketiah, popularly known as ‘General Mosquito’ who got seated in the public gallery, exactly opposite the Minority Caucus to give them morale and to also monitor whether their members will go contrary to the decision that the party had taken.

The Majority Members upon noticing the presence of General Mosquito, started making noise, ostensibly to draw the Speaker’s attention to a visitor in the person of the NDC General Secretary in the public gallery. Their agitations were also in solidarity with the Finance Minister who had been directed to walk out of the Chamber by the Speaker.

They had expected the Speaker to direct the Marshall to ensure that General Mosquito exited the public gallery since Parliament had not relaxed its directive temporarily banning visitors from observing sittings from the Public gallery because of the novel coronavirus pandemic.

However, the Speaker failed to recognize the presence of General Mosquito.

Mosquito had adopted same strategy on January 7, 2021 during the election of the Speaker of Parliament to get Rt. Hon. Bagbin elected as the Speaker.

With the Speaker failing to act on their grievances, the Majority Caucus staged a walkout in protest of the Speaker’s open biases.

Their exit from the chamber, however, did not stop the Speaker from presiding over the rest of the activities of the day’s sitting, despite suspending the House for five minutes which later turned out to be fifteen minutes.

He then called for headcount to ensure whether they have quorum to continue sitting.

Once it was established that they had quorum to continue sitting having recorded 137 members from the side side, the Speaker proceeded to call for voting on the pleadings of the Minister of Finance, a move which was declined by the Minority Members.

The Speaker then proceeded to call for the voice vote on the motion for the approval of the 2022 Budget, quoting Article 104 to buttress his position.

With the Majority having exited, the Minority had their way by vehemently voting against the motion, thereby, rejecting the 2021Budget following which the House was adjourned to Tuesday, November 30, 2021 at 10:00am.

The Majority Leader, Osei Kyei-Mensah-Bonsu addressing a press conference moments after their staged walkout described the Speaker’s action as illegal which had no binding effect on Parliament.

The Majority Leader further described the action of the Speaker as unconstitutional and being driven by partisanship.

“We want to put it on record that the Speaker was totally wrong in what business he purportedly undertook in the House in our absence”, he noted.

He added “Now what exercise he led for our colleagues on the other side to take a decision on related to a request from the Minister to be allowed space to engage both sides of the House in order to have some consensus and the position that the two sides of the House had adopted”.

He urged Ghanaians to disregard the decision by the Speaker since per the dictates of Article 104, 137 Members of Parliament per the present Members from both sides, does not constitute majority of the House to warrant the rejection of the 2022 budget.

Article 104 of the 1992 Constitution and Order 109 of the Standing Orders of Parliament put together require that at least 138 MPs were needed to have been present in the Chamber at the time of the purported vote.

“For the records, the acts of the Minority and the decision of the Speaker to endorse it constitute an unconstitutionality and an illegality and should be disregarded, as same is void and of no effect whatsoever”, Kyei-Mensah-Bonsu reiterated.