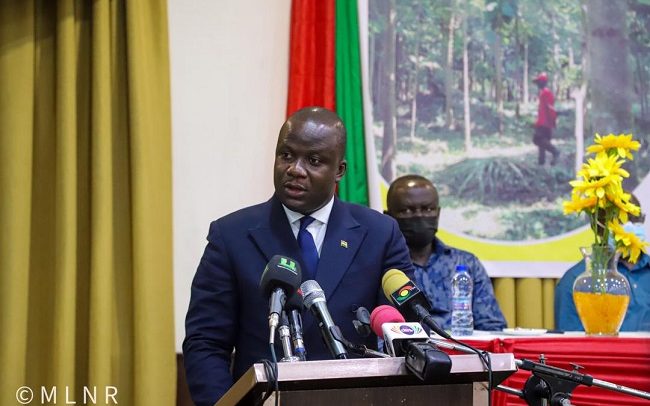 The Minister for Lands and Natural Resources, Samuel Abu Jinapor, has said that investigations into the Apiate explosion disaster has started in earnest, cautioning that anyone found to have breached any aspect of the Minerals and Mining Act, 2006 (Act 703) and the Minerals and Mining (Explosives) Regulations, 2012 (L.1.2177) would not be spared.

“Mr. Speaker, investigations into this matter will be thorough, complete, candid, fair, and with the highest standards of integrity and transparency. Anyone found culpable will be made to face the full rigours of the law”, he noted.

He added “The Ministry [Ministry of Lands and Natural Resources] is committed to ensuring that mining, and, indeed, mine support services, are carried out in a safe, healthy, and environmentally-sound manner, and we will not relent in our efforts to ensure that we achieve that”.

Briefing the Parliament on Tuesday, January 25, 2022, over the outcome of the aftermath of the Apiate explosion disaster and the measures government has put in place to restore the affected community, Jinapor said preliminary investigations into the matter have established that Maxam Ghana Limited, the company at the center stage of the transportation of the mining explosives, had sub-contracted the transportation of the explosives to Jocyderk Logistics Limited.

Jocyderk Logistics Limited is a registered and licensed company by the Minerals Commission to provide mine support services, in the nature of clearing, warehousing and transportation of explosives for mining.

To Jinapor, initial reports from the Minerals Commission as well the security agencies, indicate that the incident occurred when the truck carrying the explosives collided with a tricycle at a section of the road in Apiate, along the Bogoso – Bawdie highway.

“The impact of the collision resulted in a spark, which caused a chain reaction of explosions, bringing about the devastation to the town, which we have all seen. As at Monday, 24th January, 2022, thirteen (13) people had been confirmed dead, with at least one hundred (100) people sustaining various degrees of injuries. The impact of the explosion also caused considerable damage to several buildings in the community, rendering many families homeless”, he revealed.

The explosion, he added, also destroyed a portion of the road, making transportation to and from other communities, through Apiate, very difficult. Nevertheless, he said Government, through the Ministry of Roads and Highways, has commenced repair works on the road to make it motorable.

Notwithstanding these, he cautioned that anyone found to have breached any of the Minerals and Mining Act and L.1. 2177 shall be punished accordingly to serve as deterrent to others.

Some few hours after incident, a private legal practitioner, Prof. Kwaku Azar, had proposed that the mining company whose explosives caused the disaster in Apiate, near Bogoso in the Prestea-Huni Valley District in the Western Region, be held accountable for the death and losses.

He said the mining company must be made to pay at least US$100million to compensate for the loss of lives and damages to lives and properties. In his view, the incident could have been avoided if the laws governing the transfer of explosive materials had been adhered to.

“The mining company must be held accountable for the carnage! I see, at least, $100M of damages. But that’s not all. Who are those responsible for enforcing L.I. 2177? They must all be held accountable. People must be fired, prosecuted, demoted, etc”, he noted.

He added “The L.I. 2177 requires the vehicle compartments in which explosives are transported should be covered with sheet metal and lined with treated wood to render it non-inflammable. The compartment should be ventilated, the vehicle should be clearly marked with the danger sign, there are fire extinguisher rules, driver training requirements, etc. It is unclear whether these measures were adhered to on Thursday or not”.

It appears half of Prof. Azar’s demands have been met even before full investigations into the Apiate explosion disaster are concluded.

Jinapor told Parliament some of the actions he has initiated prior to appearing before it with the outcome of preliminary investigations into the matter.

He has also through a directive to the Mineral Commission, suspended the registration of Maxam Ghana Limited, whilst investigations are conducted into the mode of their operations.

Pursuant to these directives, Mine Inspectors from the Minerals Commission, on Saturday, January 23, 2022, closed down Maxam Ghana Limited, and stationed two mine inspectors there to guard the facility, day and night.

He has further directed the Chief Executive Officer of the Minerals Commission to suspend the registration of Jocyderk Logistics Limited, the sub-contractor that was transporting the explosives, after receiving the report of the preliminary investigations conducted into the matter.

“Investigations are ongoing to ensure that no breach of the regulations is allowed to go unpunished”, he stressed.