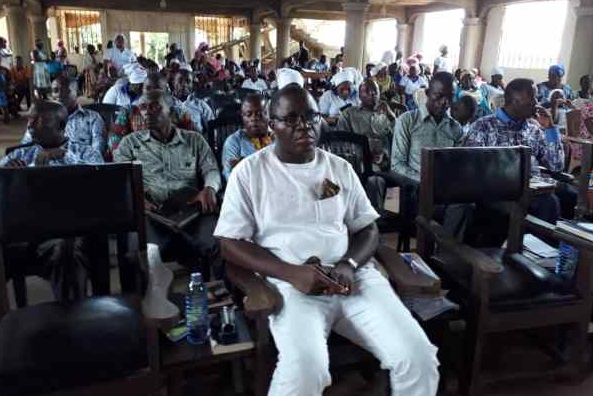 The Parliamentary candidate of the New Patriotic Party (NPP) for Mpohor constituency, John Kobina Abbam Sanie, has had his voters ID card handed over to him by the Mpohor District Elections Officer after the National Democratic Congress (NDC) backed off the challenge they mounted against his residential status in the ongoing voters registration exercise.

On Monday, July 20, 2020, the District Registration Review Committee met to consider the merits or otherwise of the challenge process initiated against Sanie.

The NPP parliamentary candidate had the issuance of his voters ID card put on hold after a challenge process was initiated against him by one Alexander Ofori, a second year student of Takoradi Technical University who is a polling station agent for the NDC.

It is not clear what informed the NDC to back off the challenge process they initiated against Sanie when there were clear indications that the ruling may tilt in their favour.

However, some sources within the NDC say their decision to back off the challenge process was strategic based on the fact that a ruling to disqualify Sanie will compel the NPP to bring back Hon. Alex Agyekum, who has for the last two parliamentary elections, proven too difficult to be defeated.

This web portal understands that the residential status of Sanie also became a matter of concern when he appeared before the NPP Vetting Committee but grossed over it and allowed him to contest the primaries.

Even though the controversy surrounding Sanie’s voters ID card has been brought to an end, his residential and identity as a true indigene of the constituency has been brought to question since he can’t convince people where he hails from and the actual family house he comes from in the community.

Reports say, he keeps on shifting the goal post. At one point, he said he hails from Ayiem but none of the family he claims he belongs to have ever set eyes on him till when he sets his eyes on the Mpohor parliamentary seat.

His new claim of hailing from Mpohor was what was challenged by NDC polling station agent who insisted he is a member of the family Sanie claims he now belongs to.

Alexander Ofori maintained that for the past 15 years as a member of that family, Sanie has never associated himself with them neither has he ever slept there even once or attended a funeral.

“It was only a week prior to the registration exercise that he brought some drinks to the elders of the family pleading that they should accept him as a family member”, Ofori recalled when initiating the challenge process against him.