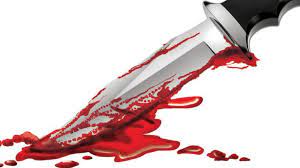 A resident of Benkyemu in the Gyaakye Electoral Area in the Tano North Municipality, Kwaku Dagarti, has stabbed his pregnant wife for denying him sex.

Local reports say Dagarti therefore, locked the wife who has been identified as Ama Tierisu, up in a room resulting in her bleeding profusely.

He in the process, prevented his neighbors from going to the aid of his wife.

It took the intervention of the Assemblyman of the Electoral Area, Abubakari Issah, popularly known as Omerike, to rescue the pregnant woman from the claws of Dagarti and sent to the Duayaw Nkwanta St. John of God Hospital where she is receiving medical attention.

After rescuing the distressed pregnant woman, the Assemblyman led some community members to arrest Dagarti and sent to the Duayaw Nkwanta Police Station where he was put into custody.

Omerike in an interview told local newsmen that “Dagarti is a very wicked man. This is not the first time he has caused damaged to his wife. The last time he damaged the wife, I led the Police to arrest him. When he was interrogated, he told the Police that he is always influenced by alcohol. He however, apologized with a promise that he will change to be of good behavior and will not take alcohol again. To be honest, for the past two months, he has been of good behavior as promised. But in recent times, I have been receiving reports Kwaku Dagarti has started terrorizing some residents in the community again, notably, in the evenings. So, when I heard about this, I went to him and warned him not to do such things again else I will not spare him”.

He added “last week Tuesday, I received a distress call from one of the residents that Kwaku Dagarti has stabbed his wife. When I went there, the woman was bleeding profusely and so I gathered some people to assist in sending the woman to the Duayaw Nkwanta St. John of God Hospital. She is receiving treatment. I also ensured that Kwaku Dagarti was arrested by the community and sent to the Duayaw Nkwanta Police Station”.

However, the Assemblyman could not confirm or deny why Dagarti stabbed his woman.

“It is only the Police that can tell us why Dagarti stabbed his wife”, he noted.