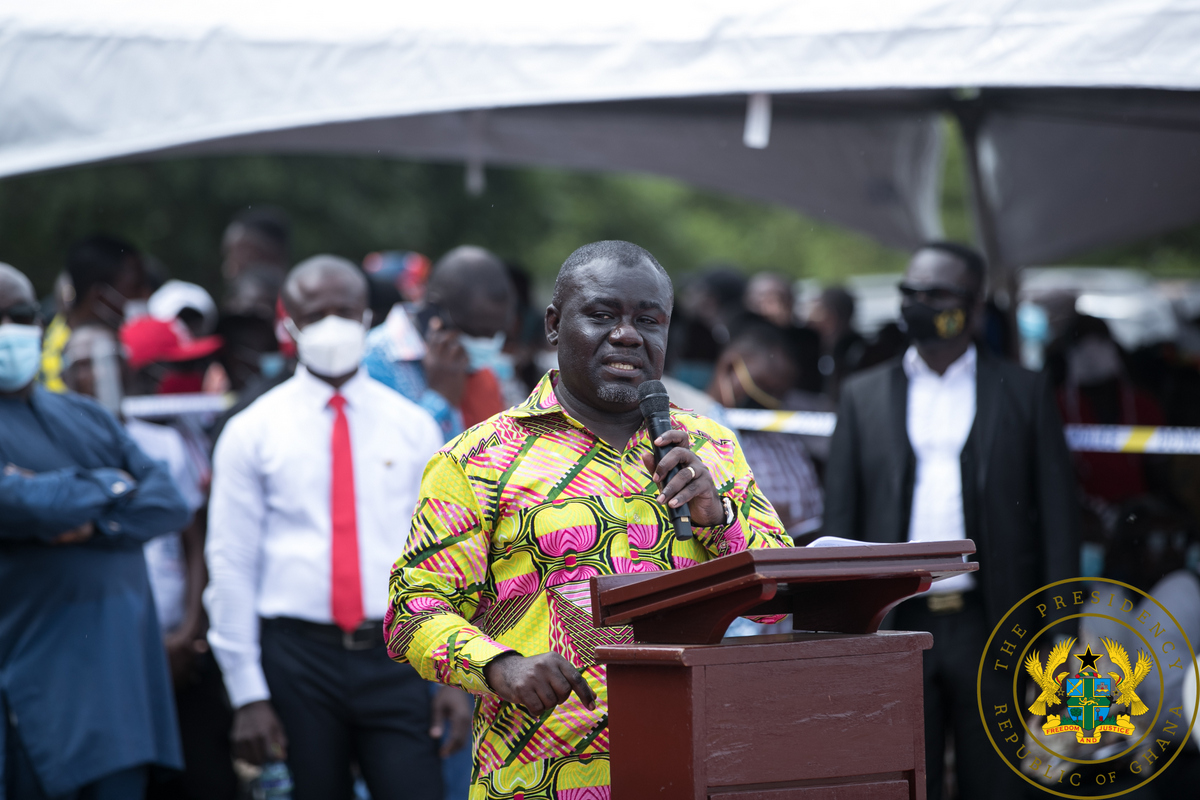 The Minister for Transport, Hon. Kwaku Ofori Asiamah, has sent a note of caution to the consortium of contractors working on the Boankra Inland Port Project, especially, the Ghanaian partner, to maintain focus and deliver quality work to justify the confidence reposed in indigenous contractors by the President of the Republic.

According to him, the delivery of quality work and on the scheduled three-year period will pave the way for more local contractors to be awarded with such big projects.

He said it was as a result of President Akufo-Addo’s confidence reposed in indigenous contractors that he (the President) instructed that Boankra Inland Port Project be awarded to a Ghanaian contractor with the requisite expertise to lead the execution of the inland port project which is of paramount importance to the government.

“The President called me one day and gave a specific directive that this project should be led by an indigenous Ghanaian contractor with the requisite knowledge to partner a foreign investor to execute the project. After going through a long diligent process, Ashanti Port Services Limited (APSL) which is a consortium of Afum Quality Limited Ghana and DSS Associates of Korea emerged as the preferred partner to develop the Boankra Integrated Logistics Terminal Project. I am therefore, cautioning the consortium not to disgrace themselves”, he cautioned.

He added “If you fail to deliver quality work and on the scheduled time frame, the impression is that the President will no longer have confidence in indigenous Ghanaian contractors for them to be awarded with such a big project in future. The US$400million Takoradi port expansion project is being led by an indigenous Ghanaian contractor. It was based on the quality of work being executed that this project was awarded to this consortium. I am optimistic that with the confidence that the President has reposed in you, you will not let him down”.

The Transport Minister made these observations in his address when he assisted the President of the Republic, Nana Addo Dankwa Akufo-Addo, and the King of the Ashanti Kingdom, Otumfuo Osei Tutu II, to cut the sod for work to begin on the Boankra Inland Port Project on Thursday, November 5, 2020.

Commenting further, he told the consortium that the realization of the Boankra Inland Port Project constitutes an integral part of the country’s strategic transport network to bring import and export services close to the door-steps of shippers in the middle and northern part of Ghana as well as the neighbouring land-locked countries of Burkina Faso, Mali and Niger.

Therefore, his outfit will not countenance low quality and late delivery of the project, stressing that the project is long overdue and Ghanaians deserve better.

The Chief Executive Officer of Afum Quality Limited, Mr. Isaac Afum, responding to the call made by the Transport Minister assured that his outfit and their partner, DSS and Associates of Korea have the requisite skills to deliver a world class project that will make President Akufo-Addo and Ghanaians proud.

He said to ensure work on the project go as planned, the US$330million meant to finance the project is ready, noting that “now that the President has cut the sod for commencement of work on site, nothing is going to stop or delay us from delivering”.

According to Mr. Afum, the project will focus heavily on the construction of specialized warehouses for the storage of cocoa beans and grains. Therefore, they will provide customized warehousing, processing and storage facilities for target companies currently operating in Ghana such as the Ghana COCOBOD, GHACEM, National Food Buffer Stock Company (NAFCO), Cargill, Nestle, Guinness, Premium Foods and ADM Cocoa (Ghana) Limited.

He revealed that the consortium will position the Boankra Integrated Logistics Terminal to attract new market participants such as Lotte Logistics, CJ Logistics, Daewoo Logistics and Logis all from Korea; ALSCO from China; and NDW from Netherlands.

“We are also going to construct warehouses for the storage of petroleum and petrochemical products, cement and other bulk cargo and these are going to be done in phases. We have a plan to guide us and the money to execute the project. We are going to deliver a project that everybody will be proud about”, he noted.

The dry port project, according to Hon. Asiamah, when completed will among other things:

The Boankra Integrated Logistics Terminal (BILT), strategically located near Kumasi, was initiated by the Ghana Shippers Authority (GSA) and the Ghana Ports and Harbours Authority (GPHA) in the early 1990’s to create a dry port as an extension to the Tema Port.

BILT is to be developed on a 413-acre parcel of land located 27 kilometers from Kumasi in the Ashanti Region.

The Concession Agreement for the BILT is for 30 years including a three-year construction period. The Concessionaire is Ashanti Port Services Limited (APSL), a consortium consisting of Afum Quality Limited of Ghana and DSS Associates of South Korea.