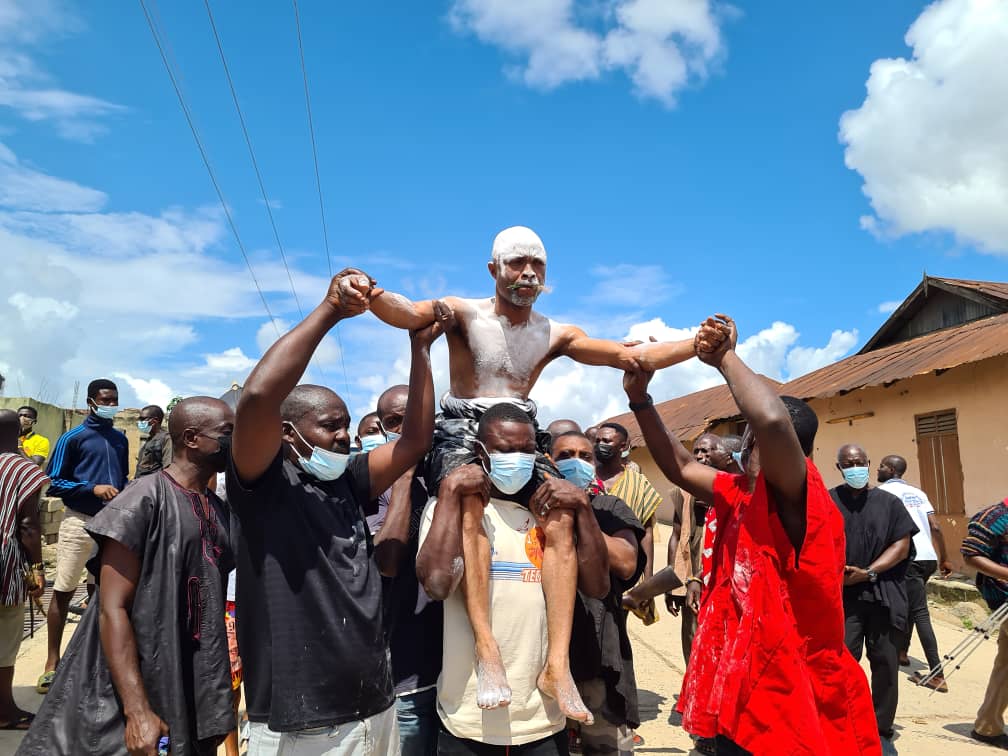 The Chiefs and people of Anum-Asamankese Traditional Area have enstooled Samuel Osei Agyei as their Asomkahene at a colourful ceremony held at the Anum Ahenfie at Asamankese.

Samuel Agyei swore an oath of allegiance to the Amankrado of Anum-Asamankese, Baffour Kwame Amponsah III and to the Omanhene of Anum-Asamankese Traditional Area, Barima Essah Kwesi Mensah Bediako III, who performed the installation ceremony.

Barimah Mensah Bediako III showered powder on him to officially signify that Samuel Osei Agyei is now a Chief with the title Baffour preceeding his name.

The new Asomkahene whose name is Baffour Kwaku Agyei Kodie I, will serve as the ‘ear’ (Public Relations Officer) of the Chiefs and people of Anum Asamankese led by Barima Esaah Kwasi Mensah Bediako III.

The new Asomkahene will be taken through traditional lessons for three days before his official outdoring and coronation where he will swear an oath of allegiance to Barima Essah Kwasi Mensah Bediako III on Sunday during the Akwasidae, which is a durbar of the Chiefs and people of Anum-Asamankese.

Samuel Osei Agyei is a Journalist by profession. He is currently the Managing Editor of www.frontpageghana.com and the Organising Secretary of the Parliamentary Press Corps.

The occasion was witnessed by all sub-chiefs of Anum-Asamankese, Queen Mothers, friends and well-wishers, members of the Parliamentary Press Corps, family members and Chiefs of the Anum-Asamankese.