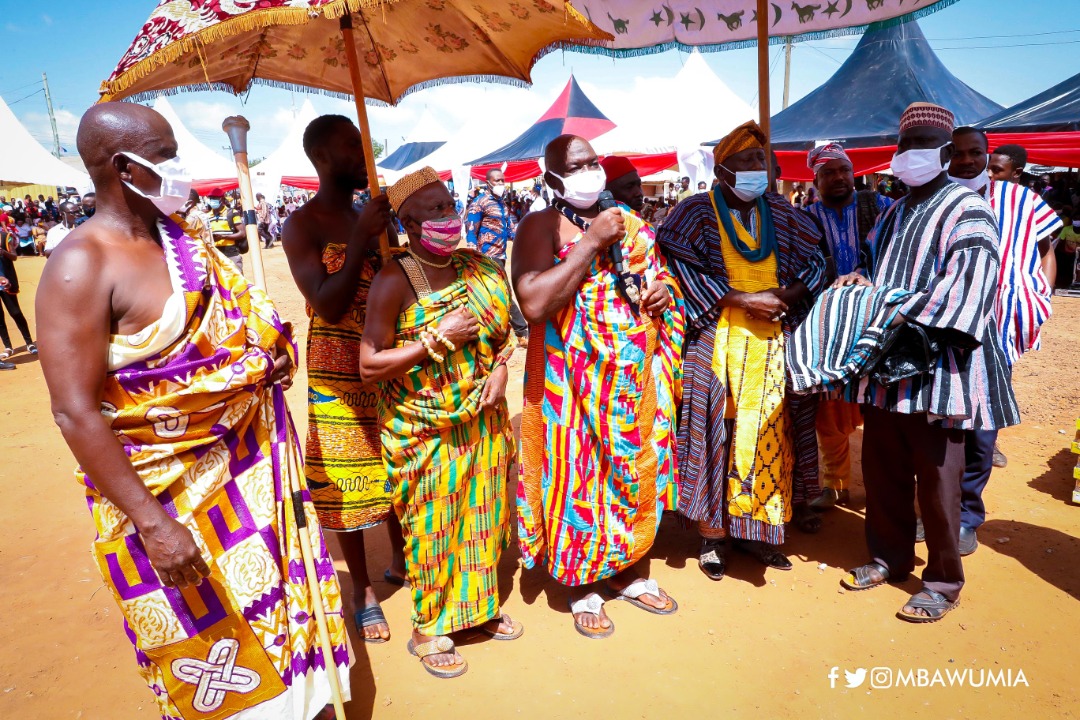 Traditional rulers in the Mo Traditional area have told Vice President, Dr. Mahamudu Bawumia, that after 28 years of voting for the NDC, it is time to back the NPP to show gratitude for what the Akufo-Addo government has done in the area.

“On behalf of the Chiefs of Mo Traditional area, I present to you this smock, which will always remind you of this visit to Kintampo.

“Not just that, we want to seal it with a promise right in front of you that as for this year, we want to switch to NPP so that we can also benefit more from the wind of development blowing in the country and be bigger than the way you see us. We thank you very much,” Nana Agyei Adinkra said on behalf of the Mo Traditional Council.

He added: “The most important thing is to fulfill this promise we have made to you and we can assure you that it will be fulfilled. And when it is fulfilled, please don’t forget the people of Kintampo.

“We assure you with prayers that we will change the way we vote.”

Earlier, the Wangara Chief of Kintampo Nana Fanyinama lll, commended the Akufo-Addo government for the development  projects it is undertaking in the area, and also requested for more, “like Oliver Twist”.

The two Kintampo Constituencies, North and South, have consistently voted for the NDC but speakers at the programme, including traditional authorities were of the view that there hasn’t been commensurate development projects in the area.

Vice President Bawumia told chiefs and people of the area that despite not voting for the NPP, the Akufo-Addo government believes in all-inclusive development of the nation so it has spread development to every corner of the country.

He added that the Akufo-Addo government’s all-inclusive agenda is evident in the number of development projects it has brought to towns in the Mo Traditional area.

Dr. Bawumia thanked the traditional rulers for their appreciation of the good works of President Akufo-Addo and their decision to vote for him and the NPP Parliamentary candidates of the area.

The Vice President also assured them that Kintampo and the people of Ghana will continue to benefit from more development under the leadership of President Akufo-Addo, so they should rally behind him and vote NPP in December.